To create a Nested Style, you need to add a Character Styleor stylesto a Paragraph Style definition.

Choosing Through includes the character that ends the Nested Style, while choosing Up To formats only those characters that precede the designated character.

If you have more than one Nested Style you can use the up button or down button to change the order of the styles in the list, determining the order in which the formatting is applied. The formatting defined by the second style begins where the formatting of the first style concludes.

Figure 14.11. Apply Nested Styles from the beginning of the paragraph forward. The Nested Style will be "on" until the specified number of the chosen delimiterfor example 4 Words, 1 sentence, 1 en spaceis found in the text. You can also type a specific character such as a colon (:) into this field. 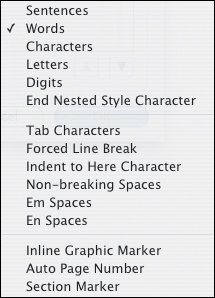 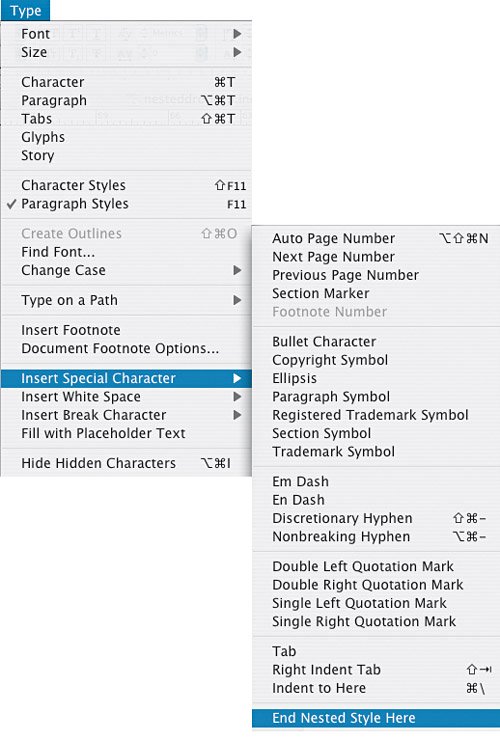 Here are some practical applications of Nested Styles:

What if there just isn't anything that you can designate as a consistent delimiter? Well, it's possible to accommodate just about any kind of variation by entering multiple characters in the delimiter field of a Nested Style. If you enter all the possible characters that could end a sentence.?!InDesign will use the first one it encounters to turn off the Nested Style.

A common style of a contents page uses the page number as a run-in head. Additional run-in elements can include identifying tags like "Cover Story" or "Feature Article." In the example shown, this tag is reversed out of a gray bar. As we saw with Paragraph Rules, it's easy to create reverse heads that move with the flow of the text. However, in this example the "rule" is applied to only a portion of the paragraph and therefore needs to be defined as a Character Style. To make this possible, use Underline Styles. 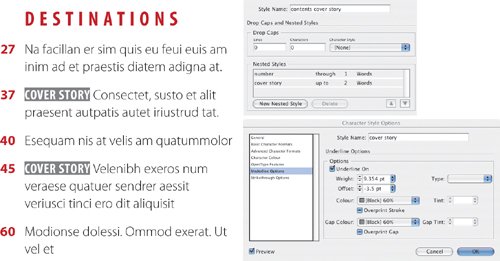 In this example, Nested Styles can be combined with Sequential Styles. The review section follows a consistent format: Artist and Album Title as the first paragraph, Record Label and Star Rating as the second, and the review itself as the third paragraph. Paragraphs 1 and 2 contain Nested Styles (with an en space delimiter) and a Next Style specified. Select the three paragraphs and Ctrl+Click (Right Click) on the Artist Paragraph Style. From the context menu, choose Apply Artist then Next Style.

Figure 14.15. Review Section: From moth to butterfly in 2 clicks! 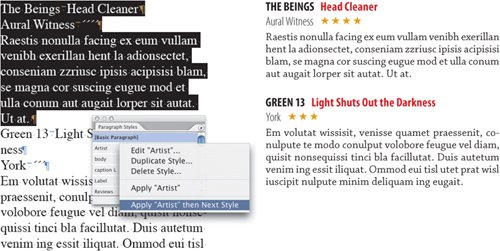