Need to customize a letter shape? Turn your type into outlines, and, with your Direct Selection tool, you'll be able to adjust the individual anchor points of the characters. Letters with counters (the trapped space inside the letters) or dots (lowercase "i" and "j") are compound paths because they consist of more than one path. In order to selectively modify their component paths, you first have to release the existing compound path: Object > Compound Paths > Release (Cmd+Option+8/Ctrl+Alt+8). 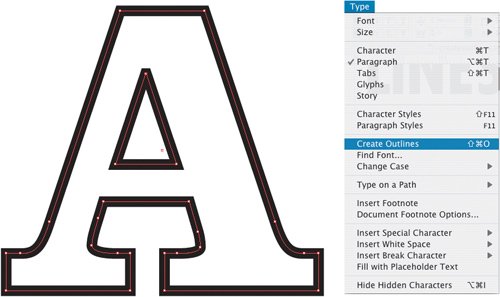 Compound paths are needed when two path shapes overlap and you want the top shape to punch a hole through the shape beneaththe "bagel" effect. For type, compound paths are necessary to create characters with counter shapes. You can also create custom compound paths for logo-style artwork that plays on the negative space created by overlapping shapes.

If you want to create overlapping effects with color, use the Transparency effect below. 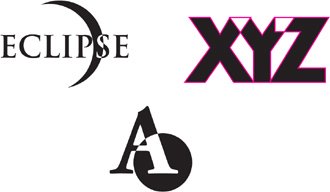 When executed well, this can be an especially effective technique, making the type serve as letter-shaped windows to your image. Again it works best with bold sans serif typeallowing you to see more of the image and allowing you to kern the type closely so that the image retains continuity from one "type window" to the next.

Figure 18.12. Type Mask. The type is stacked vertically to accommodate the image. Because the letters overlap, it is necessary to first merge the letter shapes using Object > Pathfinder > Add. To improve the definition of the letter shapes, I have added a black stroke to the letters.

Figure 18.13. Type applied as a texture. "Grass" and "Green" are selected with the Type tool and converted to outlines (making them into inline picture frames) before the grass image is Pasted Into each.