A new security Cisco ASA is shipped with ASDM loaded in flash with the following default parameters:

You can use the dir command to determine whether or not the ASDM software is installed. In case the security Cisco ASA does not have the ASDM software, your first step is to upload the image from an external file server using the supported protocols. Refer to Chapter 4, "Initial Setup and System Maintenance," for a list of supported protocols. Cisco ASA needs to be set up for basic configuration, such as the interface names, security levels, IP addresses, and the proper routes. After setting up basic information, use the copy command to transfer the image file, as shown in Example 18-1, where an ASDM file, named asdm-501.bin, is being copied from a TFTP server located at 172.18.108.26. Verify the content of the local flash once the file is successfully uploaded.

Example 18-1. Uploading the ASDM Image to the Local Flash

When the ASDM file is accessed, the Cisco ASA loads the first ASDM image from the local Flash. If there are multiple ASDM images in the flash, use the asdm image command and specify the location of the ASDM image you want to load. This ensures that Cisco ASA always loads the specified image when ASDM is launched. In Example 18-2, Cisco ASA is set up to use asdm-501.bin as the ASDM image file.

The security Cisco ASA discards the incoming requests until the client's IP address is in the trusted network to access the HTTP engine. In Example 18-3, the administrator is enabling the HTTP engine and is setting up Cisco ASA to trust the 172.18.124.0/24 network connected toward the mgmt interface.

The WebVPN implementation on Cisco ASA also requires that you run the HTTP server on Cisco ASA. However, you cannot run ASDM and WebVPN on the same interface.

The GUI of ASDM can be accessed from any workstation whose IP address is in the trusted network defined on the security Cisco ASA. Before you establish the secure connection to Cisco ASA, verify that IP connectivity exists between the workstation and the Cisco ASA.

To establish an SSL connection, launch a browser and point the URL to the IP address of Cisco ASA. In Figure 18-1, the administrator is accessing ASDM by typing in https://172.18.124.205/admin/index.html as the URL. 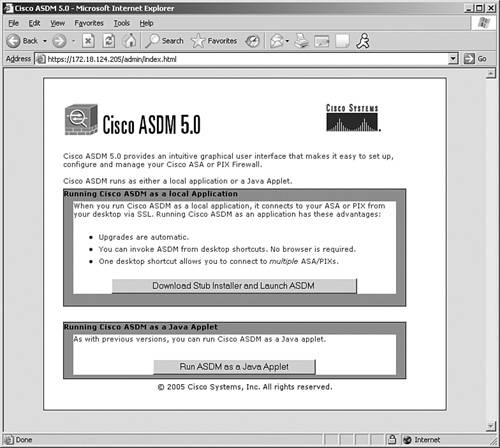 ASDM as an application feature is currently supported on Windows-based operating systems.

When the ASDM stub application is launched, it prompts for the IP address of the security Cisco ASA you are trying to connect and the user authentication credentials. Figure 18-2 illustrates this, where an SSL connection is being made to an Cisco ASA located at 172.18.124.205. Specify the username and password to log into ASDM. 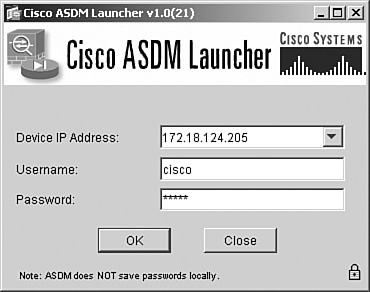 Chapters 18, 19, 20, and 21 use ASDM as an application to guide you through the configuration and monitoring features of the security Cisco ASA.

The ASDM application saves the previously connected IP addresses and username information in a file called deviceInfo.cfg. It is located under user_home_directory.asdmdata. It is highly recommended that you do not manually edit this file. It can be deleted if the IP addresses and the usernames need to be cleared.