If the user authentication is successful, ASDM checks the current version of the stub application and downloads a new copy if necessary. It loads the current configuration from the security Cisco ASA and displays it in the GUI, as shown in Figure 18-3. 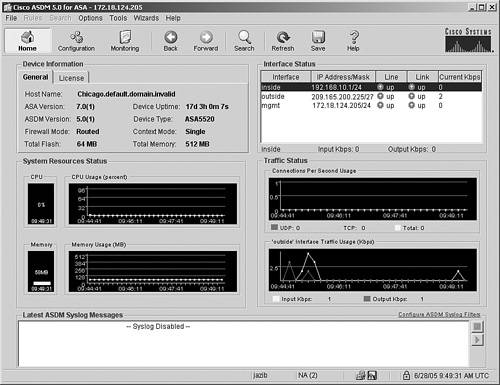 ASDM logs the debug and error messages into a file to troubleshoot the application-related issues. The name of the file is asdm-log-[timestamp].txt and it is located at user_home_directory.asdmlog.

ASDM divides the initial screen, also known as the Home screen, into the following five sections:

The statistics on the Home screen are refreshed every 10 seconds and show the information for the last 5 minutes.

The ASDM application has seven menus on the toolbars to configure certain parameters. One of the menus is called Wizards, which contains two options, VPN Wizard and Startup Wizard. To launch the Startup Wizard, choose Wizards > Startup Wizard, as shown in Figure 18-4. 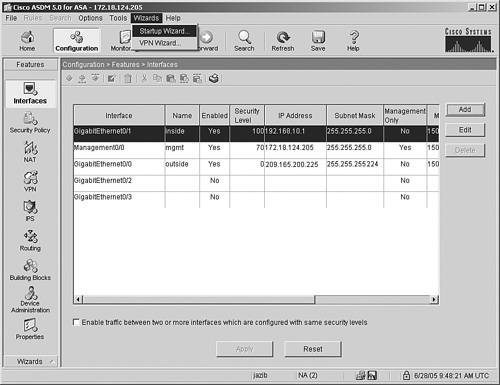 The Startup Wizard can also be launched by choosing Configuration > Wizards > Startup.

Figure 18-5. Starting Point of the Configuration 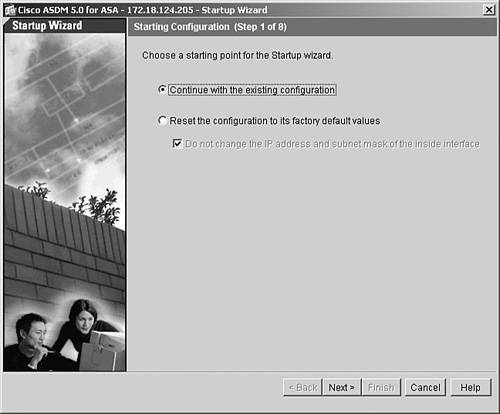 Chapter 4 talks about the default configuration. 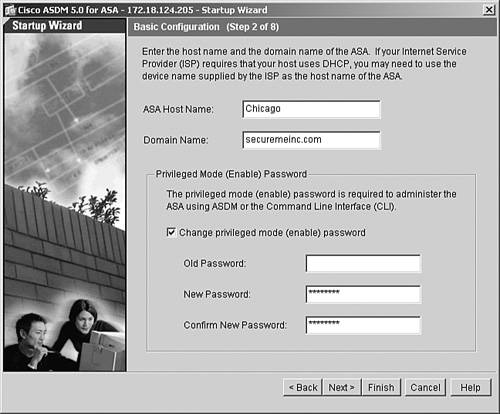 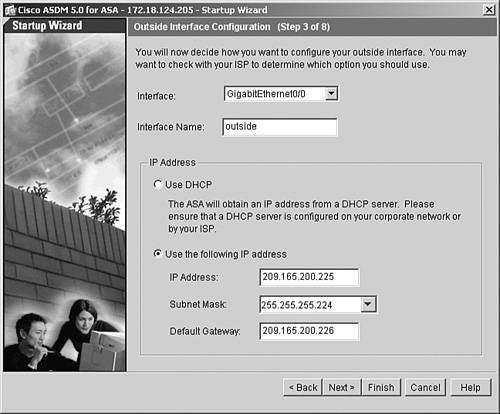 You can select the remaining interfaces and edit attributes such as the interface name, security level, and IP address/subnet mask.

You might lose your connection to the security Cisco ASA if you modify the interface parameters that ASDM is connected to.

The wizard allows you to enable a DHCP server on the inside interface. The security Cisco ASA can assign DHCP attributes such as IP addresses from a pool, the DNS and WINS server addresses, the default gateway address, the domain name, and the lease expiration time. 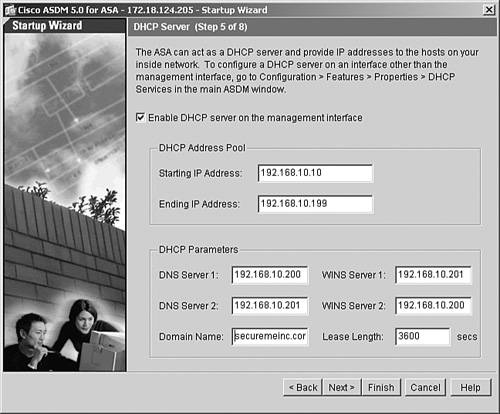 If address translation needs to be set up on Cisco ASA, the Startup Wizard presents three options:

In Figure 18-9, ASDM is being set up to dynamically translate the inside hosts to the outside interface's IP address using PAT. 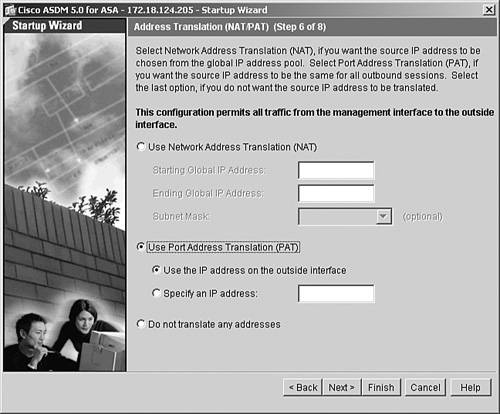 The last configuration step in the Startup Wizard allows you to set up administrative access to Cisco ASA. As discussed in Chapter 4, the security Cisco ASA supports Telnet and SSH as the CLI-based remote management protocols, and supports ASDM as a GUI-based application. You can specify the allowed IP addresses on each of the interfaces for each of the management protocols. In Figure 18-10, the 192.168.10.0/24 network is allowed to establish SSH connections to Cisco ASA from the inside interface, while the 172.18.124.0/24 subnet is allowed to establish SSH and HTTPS connections from the mgmt interface. 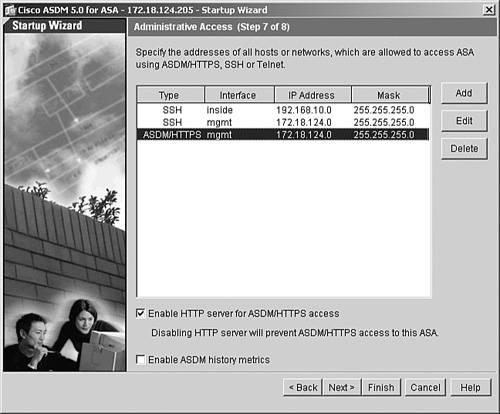 If the HTTP server is disabled, ASDM will stop communicating with Cisco ASA.

If the "Preview command before sending to the device" option is enabled on ASDM under Tools > Preferences, the entire startup configuration is displayed before it is sent to the security Cisco ASA, as shown in Example 18-4.