We can use the techniques we've discussed in the previous sections for executing stored programs, although there are some circumstances in which you will need to use some additional techniquesspecifically, if you need to retrieve multiple result sets or retrieve the value of an output parameter.

To execute a simple, one-off stored procedure that returns no result sets, we can simply invoke it with the do() method of the database handle, as shown in Example 15-20.

Example 15-22 shows how we would retrieve that result set in Perl. The approach is exactly the same as the one we would use for a SELECT statement or other SQL that returns a result set.

Example 15-22. Fetching a single result set from a stored procedure

Since stored procedures may return multiple result sets , DBI provides a methodmore_resultsto move to the next result set in a series. The DBD::mysql driver implementation of this method was still experimental at the time of writing (it is available in developer releases 3.0002.4 and above). We'll keep you updated on the status of DBD::mysql at this book's web site (see the Preface for details).

Because we know in advance the number and structure of the result sets returned by the stored procedure, it is relatively simple to process the results. In Example 15-26, we simply retrieve the first result set as usual, call more_results, and then process the next result set.

Let's step through this code:

A stored procedure may contain OUT or INOUT parameters that can return individual scalar values from the stored procedure call. The DBI specification provides the bind_param_inout method for retrieving the values of such parameters. Unfortunately, this method is not implemented in the DBD::mysql driver as we write thiswe'll keep you posted on the status of this method for MySQL at the book's web site.

Example 15-28. Retrieving an output parameter without the bind_param_inout method

Watch out when creating strings that include user variables in Perl. By default, the @ symbol indicates a Perl array andif the @ appears in a double-quoted stringPerl will attempt to replace the apparent array with a Perl value. So you should always include these types of strings in single quotes or escape the user variable reference by preceding the @ symbol with "" (e.g., SELECT @user_var).

Also, remember that if the stored program includes any result sets, you must process all of these result sets before attempting to retrieve the values of an output parameter.

In this section we'll put all of the techniques we have described so far into an example procedure that implements a simple web-based MySQL server status display. The example will prompt the user for MySQL server details and return selected status information about that server. The information will be provided by a single stored program that returns multiple result sets and includes both input and output parameters.

To help us generate a well-formatted report, the stored procedure outputs a header row for each of the result sets it returns. This header row is issued as a single-row, single-column result set in which the column name is table_header.

Our Perl example is contained in Example 15-30. This is a Perl CGI script, designed to be run from the "CGI bin" directory of a web server such as Apache or Microsoft IIS. The program generates HTML to prompt for user input, connects to MySQL, runs the stored procedure, and generates the HTML to output the results.

Let's step through this example:

This Perl program first generates the HTML input form, as shown in Figure 15-1.

When the user clicks the Submit button, the CGI Perl script generates output, as shown in Figure 15-2.

Figure 15-1. Input form for our example 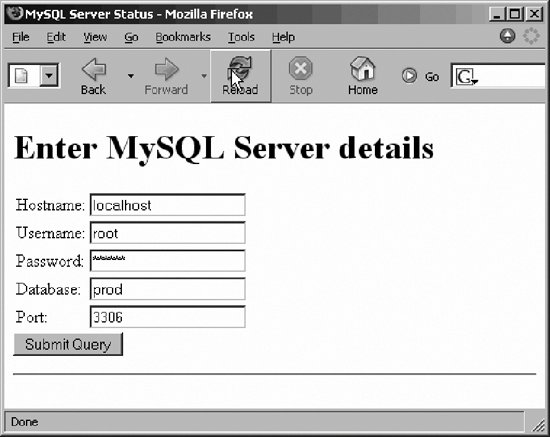