While it is certainly possible to use JDBC inside Java to construct client/server applications or even Java applets, the most significant interaction between Java programs and a relational database often occurs with a J2EE application server environment, usually within the context of a J2EE-based web application. This application server could be a commercial J2EE implementation such as WebLogic or WebSphere orperhaps more typically in combination with MySQLan open source J2EE server such as Tomcat or JBoss.

In the servlet pattern, JDBC code is included within Java programs running within the application server. These programs are known as servlets . These servlets are free to communicate directly with the database through embedded JDBC code, although many applications will choose to interact with the database through an object-relational mapping interface such as Hibernate.

In an Enterprise JavaBeans (EJB) based application, access to database objects is abstracted via entity EJB beans. Each entity bean represents either a table or a common multitable entity, and each instance of the entity bean typically represents a row in that table or result set. The EJB pattern contains methods to retrieve, update, delete, and insert rows within this logical table.

A full tutorial on J2EE database programming is beyond the scope of this book (and probably beyond the expertise of its authors). However, in this section we will take a quick look at how you might use stored programs within a J2EE application.

In a servlet-based Java web application, Java code in the application or web server controls the generation of dynamic HTML content based on business logic contained within the Java code and through interaction with back-end databases via JDBC. Servlet technology actually predates J2EE (servlets were introduced in Java 1.1), and there is a wide variety of possible servlet implementation patterns.

Note that the stored procedure uses a special technique to output "heading" rows for the result sets. When a single row is returned with a column named table_header, that row represents a title or heading for the subsequent result set.

Our example is going to use an HTML page to request the user to enter specific server information, and then use a servlet within the application server to display the output of the stored procedure. The HTML for the input form is very simple and is shown in Example 14-24.

The HTML renders the data entry screen shown in Figure 14-3.

Example 14-25 shows the code for the Java servlet that is invoked when the user clicks the Submit button. 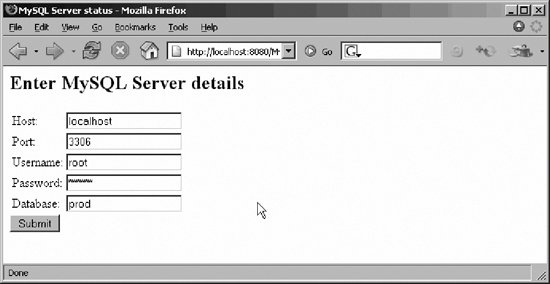 Figure 14-4 shows the output generated by the servlet and stored procedure.

Enterprise JavaBeans (EJB) is a feature of the J2EE specification that provides for distributed server-side Java components intended for enterprise systems development. Entity EJBs provide a way to represent persistent datausually data from an RDBMSin the EJB component model. 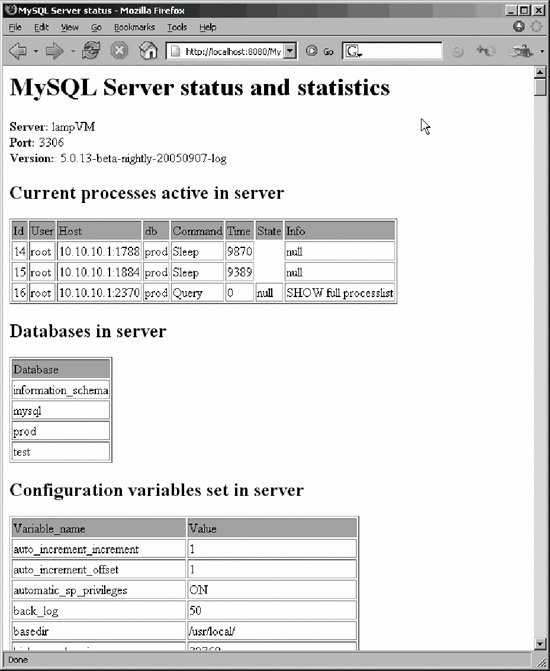 Each EJB includes various methods that allow the application to interact with the underlying data. Some of these methods are listed in Table 14-1.

Entity EJBs in a J2EE application are responsible for representing all persistent data in the application, where persistent means that the data will continue to exist when the current thread, process, or application ceases to run. There are two styles of persistence management in entity EJBs:

In this mode, the interaction with the underlying data source is controlled by code that is contained within the EJB. In most cases, this means that the programmer includes JDBC code within the bean to query and update the underlying tables, or uses an abstraction layer such as Hibernate or Spring to generate the JDBC calls.

In this mode, the interaction with the underlying data source is controlled by the EJB container itself. The container generates SQL to retrieve and maintain data based on deployment data that defines the relationship between the data represented by the entity bean and the data held in the relational database.

In CMP, the SQL is issued by the EJB container itself and is not under developer control. Consequently it is not really feasible to use stored programs in conjunction with a CMP EJB. It's fair to say that CMP is the recommended method of implementing entity bean persistence, since it reduces the effort involved in implementing the bean and since (somewhat surprisingly) CMP implementations can outperform BMP implementations. Most J2EE experts recommend using BMP only when there is a very complex relationship between beans and the underlying tables or when some special SQL coding is required for performance or security reasons.

Note also that the J2EE specification does not forbid accessing the database from session beans, and the programmer is free to implement JDBC within a session bean framework in order to retrieve and maintain persistent data. In this model, JDBC calls would be embedded in the session bean much as we embedded JDBC within a Java servlet in the "Using Stored Programs Within Java Servlets" section earlier in this chapter.

However, in the case in which our database logic is contained in a BMP-based entity bean, we can certainly use a stored program implementation if we choose.

For instance, Example 14-26 shows a typical EJB method that we might use to locate an EJB representing a particular customer using the customer's phone number. The bean method accepts the phone number and returns the primary key of the relevant customer (the customer_id). This customer_id would later be used by the ejbLoad() method to load the relevant bean.

Example 14-26. EJB method to find a customer by phone number

The SQL within a BMP entity bean can be implemented as a stored program. Example 14-27 shows such a finder method. The finder method calls the stored procedure GetCustomerIdByPhoneno, which returns a customer_id that matches a particular customer name.