A recursive routine is one that invokes itself. Recursive routines often offer elegant solutions to complex programming problems, but they also tend to consume large amounts of memory. They are also likely to be less efficient and less scalable than implementations based on iterative execution.

Most recursive algorithms can be reformulated using nonrecursive techniques involving iteration. Where possible, we should give preference to the more efficient iterative algorithm.

For example, in Example 22-18, the stored procedure uses recursion to calculate the Nth element of the Fibonacci sequence, in which each element in the sequence is the sum of the previous two numbers.

Example 22-19 shows a nonrecursive implementation that returns the Nth element of the Fibonacci sequence.

Figure 22-9 compares the relative performance of the recursive and nonrecursive implementations. Not only is the recursive algorithm less efficient for almost any given input value, it also degrades rapidly as the number of recursions increases (which is, in turn, dependent on which element of the Fibonacci sequence is requested). As well as being inherently a less efficient algorithm, each recursion requires MySQL to create the context for a new stored program (or function) invocation. As a result, recursive algorithms tend to waste memory as well as being slower than their iterative alternatives. 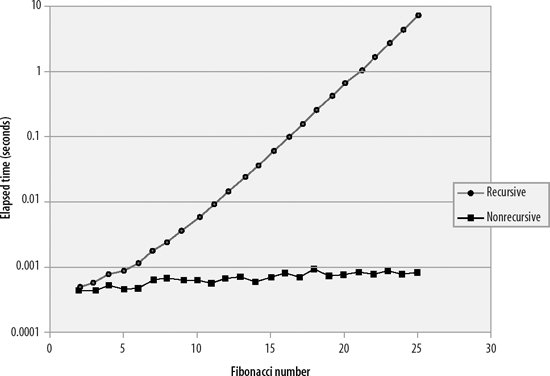 Recursion in stored functions is not allowed. An attempt to recurse in a function will always generate a runtime error: