With an anti-join, we retrieve all rows from one table for which there is no matching row in another table. There are a number of ways of expressing anti-joins in MySQL.

Perhaps the most natural way of writing an anti-join is to express it as a NOT IN subquery. For instance, Example 21-7 returns all of the customers who are not employees.

Example 21-7. Example of an anti-join using NOT IN

Another way to express this query is to use a NOT EXISTS subquery. Just as MySQL will rewrite IN subqueries to use the EXISTS clause, so too will MySQL rewrite a NOT IN subquery as a NOT EXISTS. So, from MySQL's perspective, Example 21-7 and Example 21-8 are equivalent.

Example 21-8. Example of an anti-join using NOT EXISTS

The guidelines for optimizing anti-joins using subqueries or left joins are identical to the guidelines for optimizing normal subqueries or joins. Scalability and good performance will be achieved only if we create an index to optimize the subquery or the join. For the previous examples, this would mean creating an index on customer names as follows:[*]

[*] It might occur to you that creating an index on customers would produce a better join than the index on employees. However, LEFT JOINs can only be performed with the table that will return all rows as the first table in the jointhis means that the join order can only be customers to employees, and therefore the index to support the join must be on employees.

Figure 21-6 shows the massive performance improvements that result when we create a supporting index for an anti-join. 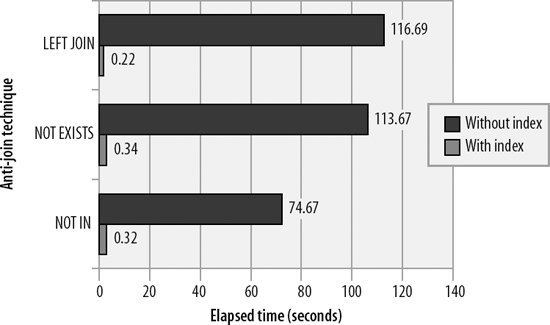 Figure 21-6 also shows a substantial performance advantage for the NOT IN subquery over NOT EXISTS or LEFT JOIN when there is no index to support the anti-join. We noted earlier that MySQL rewrites the NOT IN-based statement to a NOT EXISTS, so it is at first surprising that there should be a performance difference. However, examination of the NOT IN rewrite reveals a number of undocumented compiler directives within the rewritten SQL that appear to give NOT IN a substantial performance advantage in the absence of an index.

Not only is the LEFT JOIN technique slower than NOT IN or NOT EXISTS, but it degrades much faster as the quantity of data to be processed increases. Figure 21-7 shows that the LEFT JOIN version of the anti-join degrades much more rapidly as the size of the tables being joined increasesthis is the opposite of the effect shown for normal subqueries, where the join solution was found to be more scalable than the subquery solution (refer to Figure 21-3).