Tuning Subqueries in the FROM Clause

It is possible to include subqueries within the FROM clause of a SQL statement. Such subqueries are sometimes called unnamed views , derived tables , or inline views .

For instance, consider the query in Example 21-10, which retrieves a list of employees and department details for employees older than 55 years. 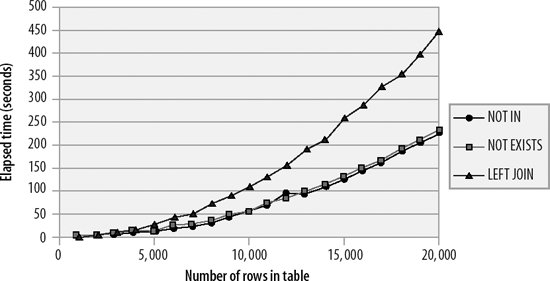 Example 21-10. Example SQL suitable for rewrite with an inline view

This query is well optimizedan index on date of birth finds the customers, and the primary key index is used to find the department name on the departments table. However, we could write this query using inline views in the FROM clause, as shown in Example 21-11.

This execution plan is somewhat different from those we have looked at in previous examples, and it warrants some explanation. The first two steps indicate that a join was performed between two "derived" tablesour subqueries inside the FROM clause. The next two steps show how each of the derived tables was created. Note that the name of the table, for instanceindicates the ID of the step that created it. So we can see from the plan that was created from a full table scan of departments.

Derived tables are effectively temporary tables created by executing the SQL inside the subquery. You can imagine that something like the following SQL is being executed to create the table:

Simply by using subqueries in the FROM clause, we have substantially weakened MySQL's chances of implementing an efficient join. MySQL must first execute the subqueries' statements to create the derived tables and then join those two derived tables. Derived tables have no indexes, so this particular rewrite could not take advantage of the indexes that were so effective in our original query (shown in Example 21-10). In this case, both the index to support the WHERE clause and the index supporting the join were unusable.

We could improve the query by moving the WHERE clause condition on employees into the subquery, as shown in Example 21-12.

This plan at least allows us to use an index to find the relevant customers, but still prevents the use of an index to join those rows to the appropriate department.

A view can be thought of as a "stored query". A view definition essentially creates a named definition for a SQL statement that can then be referenced as a table in other SQL statements. For instance, we could create a view on the sales table that returns only sales for the year 2004, as shown in Example 21-13.

The CREATE VIEW syntax includes an ALGORITHM clause, which defines how the view will be processed at runtime:

The view algorithm may be set to one of the following:

MySQL will process the view in very much the same way as a derived tableit will create a temporary table using the SQL associated with the view, and then use that temporary table wherever the view name is referenced in the original query.

MySQL will attempt to merge the view SQL into the original query in an efficient manner.

Allows MySQL to choose the algorithm, which results in MySQL using the MERGE technique when possible.

Because the TEMPTABLE algorithm uses temporary tableswhich will not have associated indexesits performance will often be inferior to native SQL or to SQL that uses a view defined with the MERGE algorithm.

This query could have been written in standard SQL, as shown in Example 21-15.

Alternately, we could have written the SQL using a derived table approach, as shown in Example 21-16.

We now have four ways to resolve the queryusing a MERGE algorithm view, using a TEMPTABLE view, using a derived table, and using a plain old SQL statement. So which approach will result in the best performance?

Based on our understanding of the TEMPTABLE and MERGE algorithms, we would predict that a MERGE view would behave very similarly to the plain old SQL statement, while the TEMPTABLE algorithm would behave similarly to the derived table approach. Furthermore, we would predict that neither the TEMPTABLE nor the derived table approach would be able to leverage our index on product_id, customer_id, and sale_date, and so both will be substantially slower.

Our predictions were confirmed. The SQLs that used the TEMPTABLE and the derived table approaches generated very similar EXPLAIN output, as shown in Example 21-17. In each case, MySQL performed a full scan of the sales table in order to create a temporary "derived" table containing data for 2004 only, and then performed a full scan of that derived table to retrieve rows for the appropriate product and customer.

An EXPLAIN EXTENDED revealed that the MERGE view approach resulted in a rewrite against the sales table, as shown in Example 21-18.

Example 21-18. How MySQL rewrote the SQL to "merge" the view definition

Figure 21-8 shows the performance of the four approaches. As expected, the MERGE view gave equivalent performance to native SQL and was superior to both the TEMPTABLE and the derived table approaches. 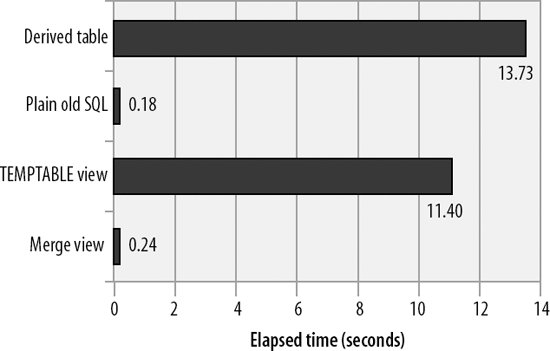 Not all views can be resolved by a MERGE algorithm. In particular, views that include GROUP BY or other aggregate conditions (DISTINCT, SUM, etc.) must be resolved through a temporary table. It is also possible that in some cases the "merged" SQL generated by MySQL might be hard to optimize and that a temporary table approach might lead to better performance.