Before you can use VSTO to put code behind InfoPath forms, you must ensure that the following things are installed on your development machine:

The toolkit must be installed last because it has an explicit dependency on both Visual Studio and InfoPath.

InfoPath Service Pack 1 contains the primary interop assemblies (PIAs) for InfoPath so that managed code can automate the InfoPath object model. Service Pack 1 also added the OnSave event, improved support for some offline scenarios, and digital signature support. You will read more about the details later in this chapter.

After you have the toolkit installed, open Visual Studio and choose New Project from the File Menu. Open up the Visual C# node in the tree view, choose Office, and then choose the InfoPath Form Template project as shown in Figure 12-1. 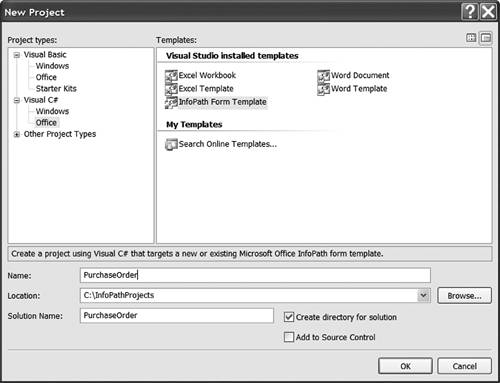 After you click OK, the Project Wizard asks whether you want to create a new form or open a form that you have already created with InfoPath as shown in Figure 12-2.

Figure 12-2. Creating the project based on a blank or existing form. 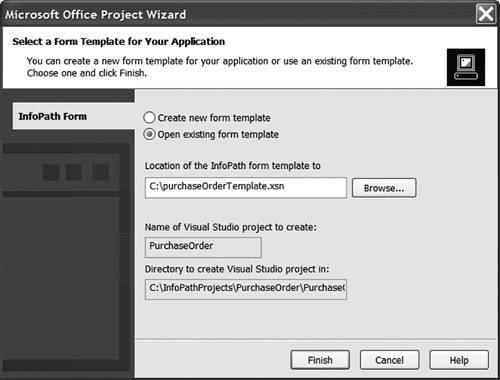 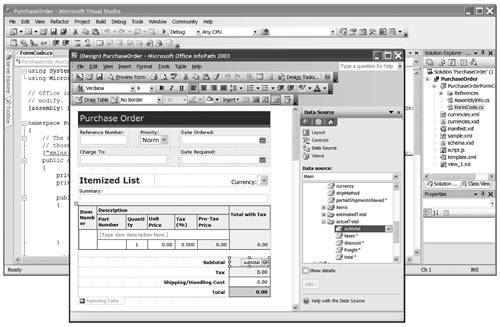 Take a look at the Solution Explorer window on the right side of Visual Studio. Behind the scenes, a form template consists of many files working together. By default, when working with just InfoPath, the XML template, XML schemas, XSL views, and so on are hidden unless you choose Extract Form Files from the File menu and then explore that folder in Windows Explorer. When designing the code behind a form in Visual Studio, you can see and edit all files in the InfoPath project directly. However, the InfoPath designer "locks" all the forms files. If you want to manually edit the files in Visual Studio, first close the InfoPath designer window to unlock the files.

Visual Studio adds the following new commands to facilitate the development of code behind an InfoPath form:

The InfoPath Project Properties dialog, also accessible from the project's right-click menu, has two settings that prove useful when previewing your form as shown in Figure 12-4. 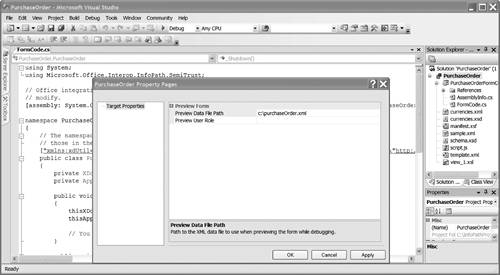 The first text box, called Preview Data File Path, takes a path to a custom XML file. Without a custom XML file, InfoPath previews with the default XML file used when filling out a new form. A custom XML file is useful for simulating what a user would experience if an existing form, saved from a previous editing session, were reopened. You can also use the Preview > With Data File command to achieve the same result.

The second text box, called Preview User Role, sets a "preview role." You can create forms that have different views depending on the "role" of the user filling out the form; an administrator might have a different view than an accountant. These roles are defined using InfoPath's User Roles command in the InfoPath Tools menu. You can also use the Preview > With User Role command to achieve the same result.