Introduction to the Actions Pane

Developing a solution that runs within an Office application provides considerable benefits because you can take advantage of the functionality that already exists in Office. However, it is sometimes hard to design a user interface that meets your needs as most of the user interface space is controlled by the Office application. Office 2003 and VSTO introduce a number of new user interface capabilities, including the ability to use Windows Forms controls on the document. (See Chapter 14, "Using Windows Forms in VSTO," for more information on this capability.)

Placing a control on the document is not always the right paradigm for the user interface of your application. For example, putting a control onto the document can often lead to issues with layout when the controls are laid out relative to a range or paragraph. If you use a button on a Word document, by default it will be inline with the text. This means that when you reformat the document, the button will move with the text. Obviously, being able to move a control with the text is something that you would want if you are developing a flow-based user interface. But this model quickly becomes difficult when developing more traditional user interfaces. Things get even more complex if you start to consider what type of behavior you want when the user prints a document. For example, do you want your Windows Forms controls to be printed with the rest of the document?

To address these user interface challenges, Office 2003 introduced the ability to put your own custom user interface into the Document Actions task pane of Word and Excel. The task pane is designed to provide a contextual user interface that is complementary to the document. For example, Word provides a task pane that shows the styles and formats available in the current document and displays the style of the current selection in the document, as shown in Figure 15-1. To display the task pane, choose Task Pane in the View menu.

Figure 15-1. The Styles and Formatting task pane in Word. 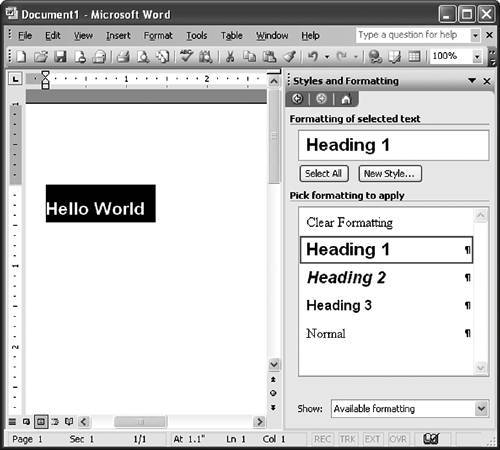 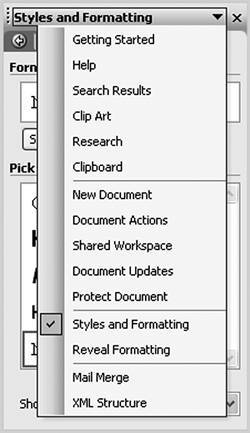 Listing 15-1 shows a simple VSTO Excel customization that displays a Windows Forms button control in the Document Actions task pane. In Excel, the ActionsPane control is a member of the ThisWorkbook class. Because this code is written in Sheet1, we use the Globals object to access the ThisWorkbook class and from the ThisWorkbook class access the ActionsPane control. The ActionsPane control has a Controls collection that contains the controls that will be shown in the Document Actions task pane. We add to this collection of controls a Windows Forms button control we have previously created. Note that just the action of adding a control to the Controls collection causes the Document Actions task pane to be shown at startup.

Listing 15-1. A VSTO Excel Customization That Adds a Button to the Actions Pane

Figure 15-3 shows the result of running Listing 15-1. The Document Actions task pane is shown with a Windows Forms button displayed in the pane. 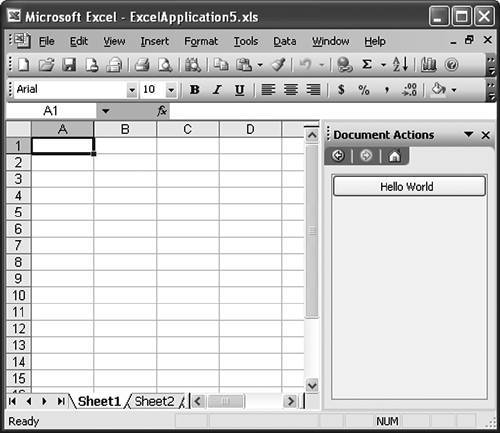 Listing 15-2 shows a similar VSTO Word customization that displays a Windows Forms Button control in the Document Actions task pane. In Word, the ActionsPane control is a member of the ThisDocument class.

Listing 15-2. A VSTO Word Customization That Uses the Actions Pane

What About Smart Documents?

Smart documents were primarily designed for the COM world. So although smart documents provided a powerful platform, it did not fit easily into the .NET development methodology. Why?