Strong names allow you to grant full trust to only those assemblies that your organization (or other organizations that you trust) created. Confusion abounds about what exactly "strong names" are, what they are for, and how they work.

Back in the old days of "DLL hell," dynamically linked libraries were loaded based on filename and location. This approach has an inherent fundamental security problem: Attackers can name their evil DLLs system32.dll or oleaut32.dll, too. Attackers could try to trick you into loading their code rather than the code that you want to load by taking advantage of this weakness in the naming system.

The traditional DLL system also suffers from other technical problems, such as versioning. When you load oleaut32.dll, which version are you getting? Writing the code to figure it out is not rocket science, but it is not as easy as it could be.

Strong names mitigate these weaknesses. The purpose of a strong name is to provide every assembly with a unique, hard-to-forge name that clearly identifies its name, version, and author. When you load an assembly based on its strong name, you have extremely good evidence that you are actually loading the code you expect to be loading, not some hostile version that some other author managed to slip onto your machine.

Because strong names identify the customization's author, you could set a policy that states that any code by a particular author is fully trusted. Suppose you have a strong-named assembly and you want to set a policy that says that all assemblies by this author are to be fully trusted. Again, create a new code group as a child of the location code group created before, but this time select the Strong Name membership condition shown in Figure 19-7.

Figure 19-7. Creating a code group with a strong-name membership condition. 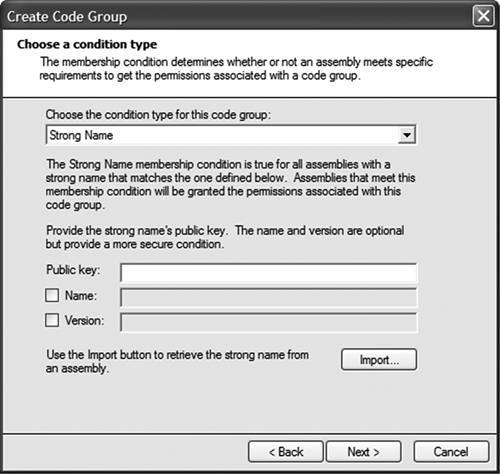 Import the public key from the strong-named assembly, and you have created a policy that trusts all assemblies by that author. (As the dialog notes, you can further strengthen the policy by trusting only certain names or even only certain versions.) But what exactly is a "public key" and what does it have to do with the code's author?

How Strong Names Are Implemented

The signing process is highly tamper-resistant. Changing so much as a single bit of the assembly invalidates the signature. Therefore, you also have good evidence that the assembly has not been changed post-release by hostile attackers out to get you.

Why Create a Child Code Group?

Code groups with membership conditions based on some fact about the assembly itself should always be children of location-based code groups. Here is why: Suppose you trust Foo Corporation. For the sake of argument, we assume that this trust is justified; Foo Corporation really is not hostile toward you. Consider what would happen if your Enterprise policy level grants assemblies signed with Foo Corporation's key full trust, period, with a level-final code group. You impose no additional location-based requirement whatsoever.

But one day, some clever and evil person discovers a security hole in version 1.0. The security hole allows partially trusted codesay, code from a low-trust zone such as the Internetto take advantage of FooSoft 1.0's fully trusted status to lure it into using its powers for evil.

Even if that flaw does not exist in the more recent versions, you are now vulnerable to it. Your policy says to trust this code no matter where it is, no matter what version it is. Evil people could put it up on Web sites from now until forever and write partially trusted code that takes advantage of the security hole, and you can do nothing about it short of rolling out new policy.

If, on the other hand, you predicate fully trusting FooSoft software upon the software being in a certain location, that scopes the potential attack surface to that location alone, not the entire Internet. All you have to do to mitigate the problem is remove the offending code from that location and you are done.

That explains why the Microsoft Strong Name code group is a child of the My Computer Zone code group. Should an assembly with Microsoft's strong name ever be found to contain a security flaw, the vulnerability could be mitigated by rolling out a patch to all affected users. If the out-of-the-box policy were "trust all code signed by Microsoft no matter where it is," there would be no way to mitigate this vulnerability at all; the flawed code would be trusted forever, no matter what dodgy Web site hosts it.

Let's take a look at each of these steps in detail.

When you need a key pair for your organization, the signing authority should create a private key file to keep to themselves, and a public key file for wide distribution. The strong-name key generation utility is sn.exe and it can be found in the bin directory of your .NET Framework SDK:

The private.snk file contains both the public and private keys; the public.snk file contains only the public key. Do whatever is necessary to secure the private.snk file: burn it to a CD-ROM and put it in a safety deposit box, for example. The public.snk file is public. You can e-mail it to all your developers, publish it on the Internet, whatever you want. You want the public key to be widely known, because that is how people are going to identify your organization as the author of a given strong-named assembly.

Developers working on the customization in Visual Studio will automatically get their User policy level updated so that the assembly that they generate is fully trusted. But what if they want to test the assembly in a more realistic user scenario, where there is unlikely to be a User-level policy that grants full trust to this specific customization assembly? If users are going to trust the code because it is strong named, developers and testers need to make sure that they can run their tests in such an environment.

But you probably do not want to make every developer a signing authority; the more people you share a secret with, the more likely that one of them will be careless. And you do not want the signing authority to sign off on every build every single day, because pre-release code might contain security flaws. If signed-but-flawed code gets out into the wild, you might have a serious and expensive patching problem on your hands.

You can wriggle out of this dilemma in two ways. The first is to create a second key pair for a "testing purposes only" strong name for which every developer can be a signing authority. Your test team can trust the test strong name, making the tests more realistic. Because it is unlikely that customers ever will trust the test-only public key, there is no worry that signed-but-buggy pre-release versions that escape your control will need to be patched.

To delay-sign a customization, right-click the project in the Solution Explorer and select Properties. In the Properties pane, click Signing, and then choose the public key file, as shown in Figure 19-8. 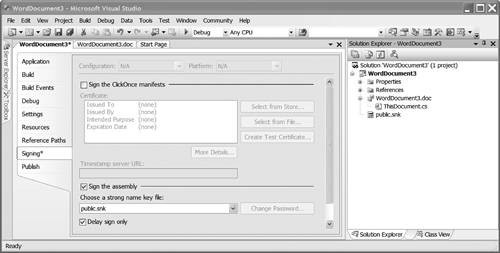 If the signature is invalid, won't the loader detect that the strong name is invalid? Yes. Therefore, developers and testers can then set their development and test machines to have a special policy that says "skip signature validation on a particular assembly":

You can turn signature validation back on with

or use Vx to delete all "skip validation" policies.

The problem with public keys is that they are a little bit unwieldy. The Microsoft public key, for example, when written out in hexadecimal is as follows:

Public key tokens are usually used when you write out a strong name. For example, the strong name for the VSTO 2005 runtime is this: