The InfoPath object model consists of objects that expose properties, methods, and events. InfoPath's programming model has two kinds of events: data source events, and form events. Because InfoPath's programming model emphasizes the role of events, let's take a look at the data source events first, and then some of the useful form events, properties, and methods of the various objects.

Each of these events can be raised on any data node (that is, element, attribute, or group of elements) in the data source.

While learning about these events and their functions, keep in mind that a data source change could occur because the text in a data node was deleted, cut, pasted, dragged, dropped, or modified in some other way. Furthermore, changes are not limited to textual changes in single elements. Inserting, deleting, or replacing a section, and repeating table row or list item also trigger data source events.

For example, suppose that we are sinking these three events for a text node called FirstName, which is bound to a text box containing the text Jogn. If the user fixes the typo by changing the text box to John, each event for the node bound to this text box will be raised twice: once as a delete operation (the text Jogn was deleted) and once as an insert operation (the text John was inserted). You will learn how to handle these cases by examining the Operation property on the DataDOMEvent object.

Furthermore, the events will not just raise on the node that changed, but also "bubble up" on the parent node of the changed node, and on its parent, and so on, until the root of the data source tree is reached.

The following sections first take a look at two ways to create event handlers using InfoPath, and then describe exactly the purpose of each of these three events.

How do you create an event handler for a particular data node? For example, suppose you have a mortgage application form and you want to handle the OnBeforeChange event for the telephone number HomePhone. Using the InfoPath designer, click the drop-down button on the data node called HomePhone and choose Properties, and then the Validation and Event Handlers tab, as shown in Figure 12-7. 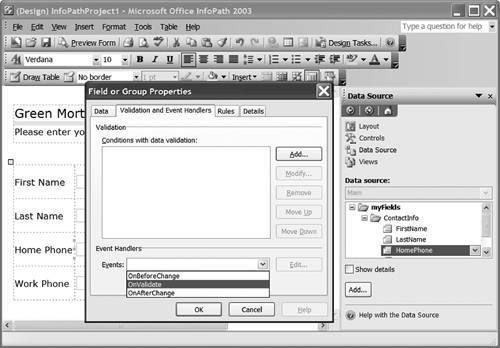 From the Events drop-down, select the OnBeforeChange event. Then click the Edit button. Visual Studio will automatically generate the appropriate event handler with the appropriate attributing. We sometimes omit the attributing in our example code in this chapter as we do herebut remember that the correct attributing must be in place for InfoPath to raise an event to a particular handler. These attributes are difficult to generate by handwhich is why you should use the dialogs of InfoPath to create these event handlers:

Figure 12-8. Selecting a control's properties to handle a data event. 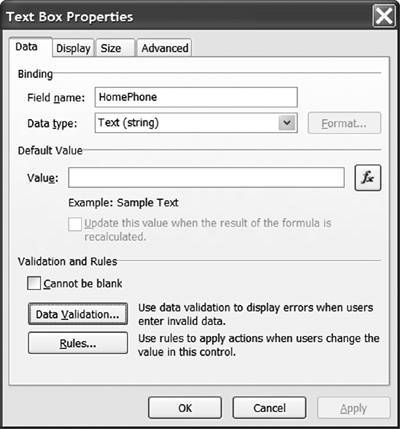 Click the Data Validation button to get to the dialog box shown in Figure 12-7.

To reject the change to the data, set the ReturnStatus property of the DataDOMEvent argument e to false. When ReturnStatus is set to false, InfoPath will show an error dialog informing the user that the change is not allowed.

Listing 12-4 shows an OnBeforeChange event handler that validates that an e-mail address is in a valid format. In Listing 12-4, we first check the DataDOMevent object's Operation property to make sure we are not in a delete operation. If we are in a delete operation, the NewValue property would be null. We then validate the e-mail address returned by the NewValue property by using a regular expression. If the change is not matched by our regular expression, we set ReturnStatus to false and set ReturnMessage to the message text we want InfoPath to use in the error dialog.

A form error is typically shown in an InfoPath form by a red dashed "error visual" rectangle surrounding the control. For instance, if you require that a telephone number include the area code, you might use an error visual rectangle to indicate an improper format, as shown in Figure 12-9.

Figure 12-9. A data validation error shown in InfoPath with a red dashed rectangle. 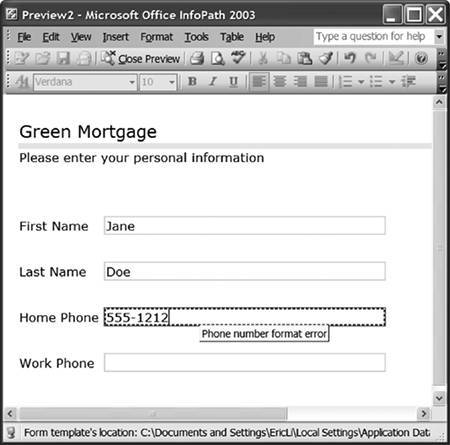 If you directly update the data node that your event handler corresponds to, use cautionotherwise you could create infinite recursion. Listing 12-6 shows a simple OnAfterChange event handler that directly changes the data node it is handling the event for by setting e.Site.text to a new value. It prevents recursion by first checking to see whether e.Site.text is already set to the new value. It also checks the IsUndoRedo property to make sure OnAfterChange was not raised as a result of an undo or redo.