Controls That Are Not in the Control Toolbox

A number of Windows Forms controls do not show up in the controls toolbox for Excel and Word projects. These controls were purposely excluded because of known issues in using them on the document surface. Some of these issues are purely design-time related in that the design-time representation of the control does not work well. This does not mean that the control cannot be used, but it might mean that the only way that you can use it on a document is by adding it programmatically at runtime or by using the control in a user control that you then add to the document.

A good example of such a control is the group box. The design-time experience of the group box does not work well in Excel or Word because the group box designer requires the container to support container drag and drop, which the Excel and Word designer does not support. You have two options to work around this limitation:

Some other controls are excluded from the toolbox because of the following reasons.

The default insertion behavior in Word can be changed to be exact-position based rather than flow based by changing the insert/paste pictures setting in Word's Option dialog from the default In line with text to In front of text. After you change this setting, all controls will be positioned where you want them instead of having to be in line with the text. To change this setting, choose Options from the Tools menu and click the Edit tab of the Options dialog. Figure 14-7 shows the Insert/paste pictures setting. 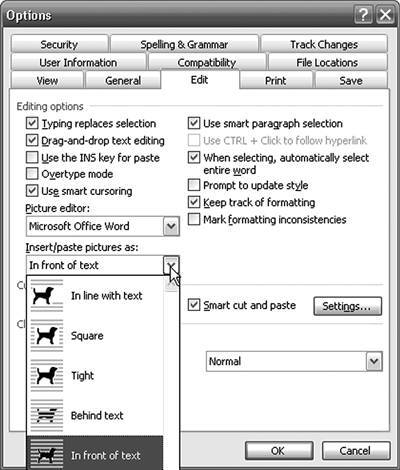 You can also change the way a control in Word is wrapped with the text by right-clicking the control in the designer and selecting the Format Control menu option. Doing so brings up Word's Format Object dialog shown in Figure 14-8. Changing the wrapping style from in line with text to in front of text provides exact positioning.

Figure 14-8. Changing the wrapping style for a control with Word's Format Object dialog. 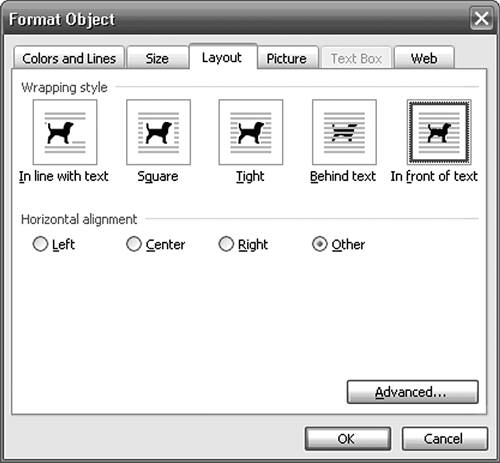 Excel also provides options for positioning a control on the worksheet surface, with the default being to move the control relative to the cell but not to size with the cell. This setting means that when you put a control onto the worksheet surface, it is linked to the cell that you dropped it on; so if you insert or delete cells around that cell, the control will stay positioned relative to the cell it was dropped on. However, if you resize the cell you dropped, the size of the control stays the same. This is usually the behavior that you would expect when adding a control. If you want your control to resize with the cell, you can either draw the control over the cell so that it exactly matches the size of the cell (not for the faint of heart) or right-click the control inside of Visual Studio and select Format Control, which brings up the Format Control dialog shown in Figure 14-9. Click the Properties tab and select one of three options:

Figure 14-9. Setting object positioning options for a control in Excel. 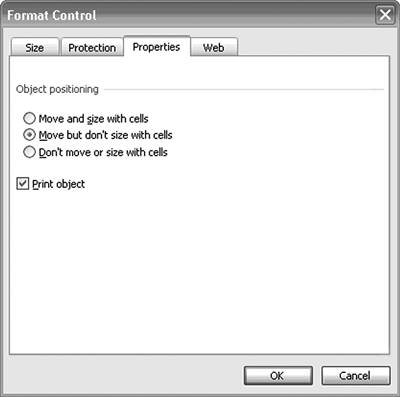 Layout of Controls on the Document or Worksheet Surface

The Windows Forms editor in Visual Studio has some great alignment tools that make it much simpler to design professional-looking forms without having to resort to per-pixel tweaks on each control. Unfortunately, the alignment tools do not work on documents because the display surface is very different from a form. In the place of these tools, a new toolbar provides easy access to the alignment functionality in Word and Excel. Figure 14-10 shows the toolbar. To align controls, just select the controls you want to align, and then click the button that represents the alignment option you want.