Typically, the implementation details of a particular technology are interesting to know but not a prerequisite for using a feature. In the case of Windows Forms control hosting on an Office document, it is important to understand how the feature is implemented because you will be exposed to some implementation details as you create solutions using controls.

Figure 14-11. The basic hosting architecture for Windows Forms controls on the document.

The fact that an ActiveX control is hosting the Windows Forms control on the document surface does peek through at times. One example is in the Excel design view. When you click a managed control that you have added to the Excel workbook surface, the formula bar shows that it is hosted by an embedded ActiveX control with ProgID "WinForms.Control.Host", as shown in Figure 14-12.

Why Are VSTO Controls Derived from Windows Forms Controls?

The fact that an ActiveX control is hosting the Windows Forms control dragged onto the document surface does not show up immediately in your code. VSTO adds a member variable to the ThisDocument or Sheet1 class named something like Button1 that you can code against just as you would if you were working with a traditional Windows Forms form. At first glance, the experience appears to be identical to working with a Windows Forms form, but the type of the control that you added to the document is not quite what you would expect. If you drag a button from the Windows Forms toolbox, it would be natural to expect the type of the button created on the document to be System.Windows.Forms.Button. However, when you add a button to a spreadsheet, VSTO creates a button with type Microsoft.Off-ice.Tools.Excel.Controls.Button that derives from System.Windows.Forms.Button. When you add a button to a Word document, VSTO creates a button with type Microsoft.Office.Tools.Word.Controls.Button that derives from System.Windows.Forms.Button. Understanding why a button in VSTO derives from the standard Windows Forms button requires some further digging into the details of how Windows Forms controls are hosted in a Word or Excel document.

Listing 14-3 illustrates this point. In Listing 14-3, we have a spreadsheet that we have added some Windows Forms buttons to, as shown in Figure 14-1. The Refresh button shown in Figure 14-1 is added to Sheet1 as a member variable called refreshButton of type Microsoft.Office.Tools.Excel.Controls.Button. We display that type in the Startup event. As mentioned earlier, Microsoft.Office.Tools.Excel.Controls.Button derives from System.Windows.Forms.Button. TheMicrosoft.Office.Tools.Excel.Controls.Button's override of Left sets the position of the ActiveX control hosting the Windows Forms control. The code in Listing 14-3 sets this Left to 0, which causes the control to move to the left edge of the worksheet. Casting refreshButton to a System.Windows.Forms.Button strips the override that VSTO adds for the Left property. Setting the Left property on refreshButton when cast to a System.Windows.Forms.Button sets the Left property of the control relative to the parent VSTOContainerControl. This listing when run gives the strange result in Figure 14-13, where the first call to Left moved the ActiveX control to the far-left edge of the worksheet but the subsequent calls to Left and Top on the base class System.Windows.Forms.Button moved the managed control relative to the VSTOContainerControl.

Figure 14-13. The result of running Listing 14-3the Refresh button has been offset relative to the VSTOContainerControl in the VSTO hosting architecture.

If you create a Windows Forms control of your own or use a third-party control, when you drag and drop the control to a document or spreadsheet, VSTO automatically generates an extended class for you that merges your control with OLEObject or OLEControl. Because the ability to add custom Windows Forms controls onto a document requires the control to be extended, you can only use controls that are not sealed. The good news is that the vast majority of third-party controls are unsealed.

The security minded might be wondering about the implications of having to use an ActiveX control to host managed controls added to a document. This is something that we spent considerable time on to ensure that the ActiveX control did not provide a vulnerability to Office. The Windows Forms control host ActiveX control when initialized does not actually do anything and will not run any code until it is accessed by the customization assembly. This means that the control is safe for initialization, and the only way for it to do anything is for code with full trust (the customization) to call it. The control is marked safe for initialization to ensure that it will load in Office with the default security settings.

One strange side effect of our control hosting architecture is that Office requires Visual Basic for Applications (VBA) to be installed in order to add ActiveX controls to a document. Adding ActiveX controls to a document does not add VBA code to that document, but it does require the use of parts of the VBA engine. You therefore need to ensure that your Office installation has VBA installed to use managed controls in the document. VBA is installed by default in all versions of Office, so it is unusual for it not to be installed. VSTO also requires that the Trust access to Visual Basic Project check box be checked in the Macro security dialog box of Office on a development machine. This check box does not have to be checked on end-user machines unless you are adding dynamic worksheets at runtime as described in Chapter 13.

Limitations of the Control Hosting Model

Each Windows Forms control on the document is contained by an instance of the Windows Forms control host ActiveX control, which leads to some limitations. The most noticeable limitation that affects all controls is the lack of support for a control's TabIndex property. Tab order in a Windows Forms is determined by the containing form or control. This is not a problem with a traditional Windows Forms form because all controls on the form are contained by one container. In VSTO, each control placed onto a document or spreadsheet is contained by it is own containerby it is own unique instance of the Windows Forms control host. The net result of this is that the tab index of the control is scoped to its container and because there is a one-to-one relationship between control and container, the TabIndex property is of little use. This can have impact on the accessibility of your application because users would expect to be able to tab between fields, but nothing happens when they press the Tab key.

Control State Is Not Saved in the Document

We already considered this limitation briefly in the introduction of this chapterthe limitation that the state of a Windows Forms control is not saved in the document. To illustrate, imagine a solution that generates customer service letters in Word. One of the key pieces of information in the document is the date the customer first called customer service. To aid with entering this date, the Word document contains a DateTimePicker, as shown in Figure 14-14.

Figure 14-14. A DateTimePicker control in a Word document. 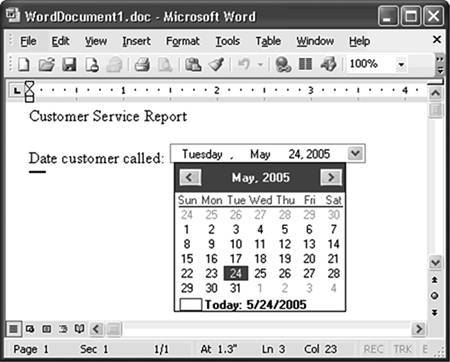 Listing 14-4 shows some VSTO code associated with the Word document shown in Figure 14-14. The code uses the cached data feature of VSTO described in Chapter 18, "Server Data Scenarios," to save the date that was picked in the DateTimePicker in a public field called lastPickedDate that has been marked with the Cached attribute. The Cached attribute causes the value of lastPickedDate to be automatically saved in a data island in the document from session to session. The Startup handler puts the stored value of lastPickedDate back in the DateTimePicker each time the document is reopened.

Listing 14-4. A VSTO Word Customization That Saves the Date That Was Picked Using the Cached Data Feature of VSTO

Why Are Controls Sometimes Slightly Blurry?

Have you noticed how sometimes a control in Word or Excel looks a little blurred when you are in the designer, but that it snaps back into focus when you run the project? This is because the Windows Forms control host ActiveX control stores a bitmap of the hosted Windows Forms control so that when Excel or Word first opens the document it can display the bitmap until the actual control is loaded. This was done because the actual control is not loaded until the customization assembly is fully loaded. If we did not do this, the control would have an attractive red x through it until the customization assembly loaded.

The reason it looks a bit out of focus is because Office anti-aliases the image when it stores it so it is not an exact copy of the original bitmap. So if you see a slightly out-of-focus control on your document, you know that your customization assembly has not loaded yet, did not load properly, or you have been up too late writing a book about Windows Forms controls on Office documents!