Deploying to an Intranet Shared Directory or Web Site

Suppose you are ready to roll out an expense reporting application using a customized Excel spreadsheet. You plan to put the application up on the http://accounting Web site. Users will download the spreadsheet to their local machines for editing, but the code will live up on the server.

As discussed in Chapter 19, ".NET Code Security," you need to ensure that users have policy that explicitly trusts the customization assembly. The policy should either explicitly trust the server, or the strong name of the assembly or, preferably, both. See the last section of Chapter 19 for tips on how to roll out security policy.

Deploying to a Server with the Publish Wizard

Choose Publish from the Build menu to start up the Publish Wizard and give the name of the intranet Web server or network share to which you want to publish the customization as shown in Figure 20-1. 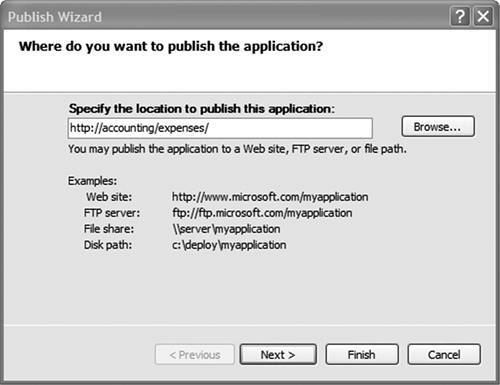 A few security questions may have just come to mind. What if your security-conscious administrators have not granted you write access to the Web site? What if the delay-signed assemblies must be properly strong-named by a signing authority, or signed with a publisher certificate before they are deployed?

The Publish Wizard creates a local copy of the files that it deploys up to the network site before it deploys them, but unfortunately there is no way to get the Publish Wizard to skip attempting to copy them up to the site. However, it is possible to do this from the command line, using the MSBuild.EXE utility. The syntax is as follows:

This produces the files that would be deployed and puts them in the following directory:

For example, the following would produce the files to be copied up to the Web server, but not actually copy them up there:

Instead, they would be saved in the following:

After you have the files to be deployed on your local machine, you can get them strong-named by your signing authority, send them to the server administrator to be copied onto the Web server, or do whatever else needs to be done before the files become available on a live server.

Take a look at the contents of the network (or local) directory to which you just deployed the application. (This will typically be a subdirectory of the c:inetpubwwwroot directory if you published to a Web site.) You should see a directory structure that looks something like this:

To understand what is going on here, we need to introduce some jargon. The ExpenseReport.application file is the "deployment manifest," and the Expense Report.dll.manifest file is the "application manifest."

A typical automatically generated deployment manifest looks something like this.

We have emphasized the relevant portions of the deployment manifest. What is all of the rest of this stuff? There seems to be some confusing things in here. Why is the root element "assembly"? Why are there two inconsistent "assemblyIdentity" elements? And what's that digital signature?

VSTO uses the same deployment manifest format as "ClickOnce," a technology designed to facilitate deployment of entire applications, not single customizations; these oddities are a result of backward-compatibility factors from the ClickOnce world.

The oldest of these historical factors is the root element "assembly." Explaining that strange choice requires us to go back to a time before the version 1.0 .NET runtime shipped. When the .NET runtime was being designed, "assembly" referred to all of an application's files and configuration information. That is, all the bits described by what we now call a "manifest." The manifest file format above dates from that time, and its elements were not renamed when "assembly" came to mean "the smallest unit of versionable executable code."

The second assemblyIdentity element uses "assembly" in the modern sense, and identifies the customization code. Notice that the codebase attribute gives the relative path to the application manifest, and the assemblyIdentity identifies the name and version of the customization code. We discuss the meanings and interactions of the various codebase attributes later in this chapter.

Again, we have "assembly" used in the now-obsolete sense as the root element and an assemblyIdentity element that gives the version number of the application manifest. What is all the rest of the stuff in here?

The Relationship Between Application and Deployment Manifests

The deployment manifest's codebase refers to the location of the server's copy of the manifest and the customization DLL. The CLR assembly loader then downloads the assembly and configuration file, caches them locally, and loads the assembly into memory. (Although the file has been cached locally for convenience, the CLR assembly loader sets the evidence associated with the assembly to match its original location, not its temporary location on the local disk.) The VSTO runtime then starts up the classes named in the entryPoint elements, and the customization runs.

A few days later, you fix some bugs and roll out version 1.0.0.1 to the server using the Publish Wizard. The next time that the user starts the document while online, the VSTO runtime contacts the server to see whether there have been any changes in the deployment manifest.

The CLR loader detects that the assembly's codebase is different and downloads the new assembly. The user is now running the latest version without ever having to download or install anything manually.

Determining the Assembly Location from a Deployment Manifest

Whereas the deployment manifest says this: