Analysis of the Editor Optimization Requirement

Typically, you collect performance data with the help of a profiling tool. If no tool is available, you can collect data about the time spent in methods and functions of interest by using the performance counter or the internal timer provided by .NET. But be careful. Inserting timing measures can itself change the timing of the application. For example, if the data is written to a file while the program is running, the result might be not be correct because of the time consumed by the slow I/O calls.

Performance analysis is usually done via a top-down approach. First we look at the system level, then at the application level, and last at micro-architecture level. The top-down approach enables us to eliminate bottlenecks or inefficiencies in the analysis that might mask underlying problems in the lower layers.

We highly recommend the use of profiling tools for the initial system analysis. Profiling tools enable developers to identify bottlenecks in systems very quickly. As with all development, the 80/20 rule is applicable to system optimization: You will spend 20 percent of the total time implementing 80 percent of the improvements. Therefore, it is advisable to look into the "big" improvement possibilities first before getting bogged down in details of minor improvements.

As mentioned before, profiling is the task of collecting performance data of a software system. In the example shown here, we use the Quantify tool from Rational to uncover bottlenecks and to analyze the performance of the application.

The first step is to record overall reports of common use cases in which performance problems are experienced. The use case we use to record the data is the contrast calculation that is applied to an image:

A user changes the contrast using the Contrast control and applies the result to the entire image using the Apply button.

This scenario is run with an instrumented version of the application that is run from within the profiler application. (Instrumented means that the profiler does the magic of recording and timing all method calls.) Figure 10.1 shows the collected data for this use case. The figure shows the collection of all the method calls that were made, including the number of calls to the method and some additional timing measures. 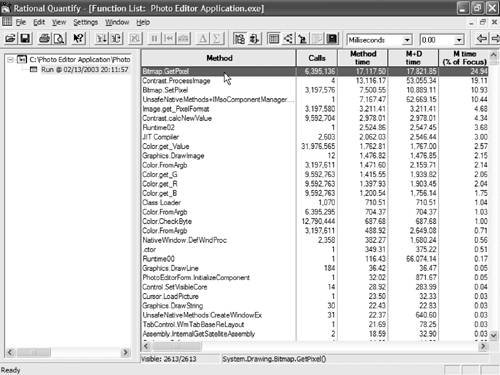 We can drill down the list of methods to inspect the profiling data for any method in different views. Figure 10.2 shows the Contrast plugin's ProcessImage method. 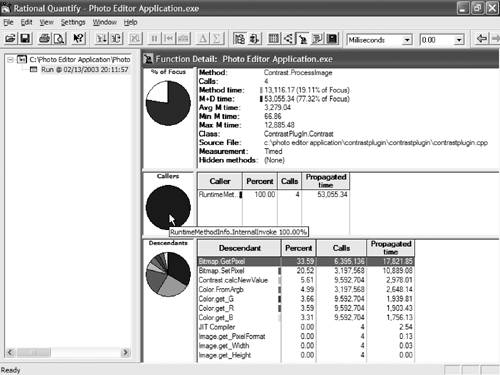 This pie chart view shows a method and all the calls to other methods. In the example, the ProcessImage method calls the GetPixel and SetPixel methods of GDI+. The calls to get and set the pixel take by far the most time and are good candidates for optimization.

Based on the profiling results, it seems feasible to change the implementation of the plugin to use pointer arithmetic to get and set the pixel values of the image instead of using the GDI+-provided get and set methods.

With this performance optimization, we want to improve the application's overall performance, and in addition we would like to optimize the GUI response time. This means that the application GUI should not block when a lengthy calculation is being applied on an image. Instead, the GUI should still respond to the user, with the restriction that no new calculation on the image can be started before the current calculation is finished. In other words, all image calculations are handled sequentially, but other GUI operations (such as switching tab controls) can be performed.

Building the Web Application with ASP.NET