Figure 18-1. The Mac's standard Save dialog 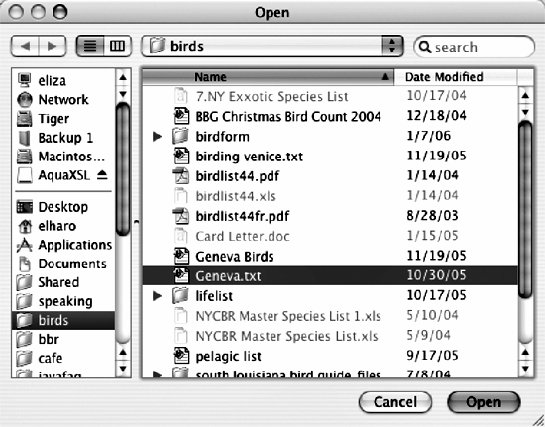 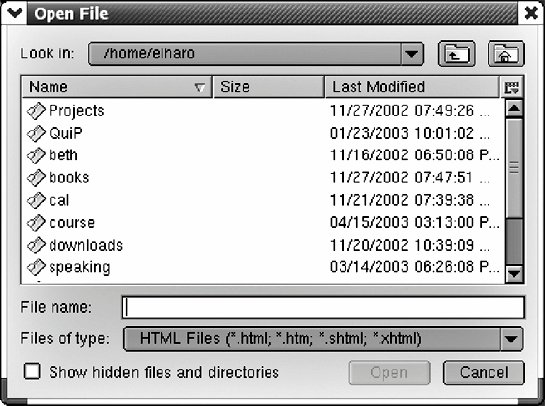 FileDialog is a subclass of java.awt.Dialog that represents the native save and open dialog boxes:

A file dialog is almost completely implemented by a native peer. Your program doesn't add components to a file dialog or handle user interaction with event listeners. It just displays the dialog and retrieves the name and directory of the file the user chose after the dialog is dismissed.

To ask the user to select a file from a file dialog, perform these four steps:

Starting in Java 5, you can use another Dialog as the parent if you prefer:

Each FileDialog usually has a title. This is the prompt string for the file dialog, such as "Open File" or "Save Message As". This is also set in the constructor:

Finally, each FileDialog is either in open mode or save mode. The default for the previous constructors is open mode. However, this can be specified with one of these two constructors:

The mode argument is one of the two mnemonic constants FileDialog.LOAD or FileDialog.SAVE:

Getter and setter methods allow the mode to be inspected and changed after the dialog is constructed:

To specify that the file dialog should appear with a particular directory opened or a particular file in that directory selected, you can invoke the setDirectory( ) and setFile( ) methods:

As soon as the file dialog becomes visible, the calling thread stops and waits for the user to choose a file. The operating system takes over and handles user interaction until the user chooses a file or presses the Cancel button. At this point, the file dialog disappears from the screen, and normal program execution resumes.

Once the dialog has been dismissed, you can find out which file the user chose by using the file dialog's getdirectory( ) and getFile( ) methods:

If the user cancels the file dialog without selecting a file, getFile( ) and geTDirectory( ) return null. You should be ready to handle this, or you'll bump into a NullPointerException in short order.

Example 18-1 is a program that presents an open file dialog to the user and writes the contents of the file she selected on System.out.

A filename filter can be attached to a file dialog via the dialog's setFilenameFilter( ) method:

Once a file dialog's filename filter is set, it should only display files that pass through the filter. However, filename filters in file dialogs are only reliable on Unix (including Linux and Mac OS X). Windows is almost congenitally unable to support it because Windows' native file chooser dialog can only filter by file extension.

Example 18-2 demonstrates a simple filename filter that accepts files ending in .text, .txt, .java, .jav, .html, and .htm; all others are rejected.

You do not necessarily have to write a new subclass for each different file filter. Example 18-3 demonstrates a class that can be configured with different lists of filename extensions. Every file with an extension in the list passes the filter. Others don't.

This class is designed to filter files by extension. You configure which extensions pass the filter when you create the object or by calling addExtension( ). This avoids excessive proliferation of classes.