As an example, I'm going to show a subclass of javax.swing.JTextArea that can be connected to an output stream. As data is written onto the stream, it is appended to the text area in the default character set. (This isn't ideal. Since text areas contain text, a writer would be a better source for this data. In later chapters, I'll expand on this class to use a writer instead. For now, this makes a neat example.) This subclass is shown in Example 2-4.

The TextAreaOutputStream inner class is quite simple. It extends OutputStream and thus must implement the abstract method write( ). It also overrides the primary array write( ) method to provide a more efficient implementation. Finally, it overrides close( ) to make sure that no writes take place after the stream is closed.

To use this class, simply add an instance of it to a container such as an applet or a window, much as you'd add a regular text area. Next, invoke its getOutputStream( ) method to get a reference to the output stream for the area, then use the usual write( ) methods to write into the text area. Often, these steps will take place at different times in different methods.

Figure 2-1 shows a program using a JStreamedTextArea to display data downloaded from http://www.oreilly.com/. The application in this picture will be developed in Chapter 5. 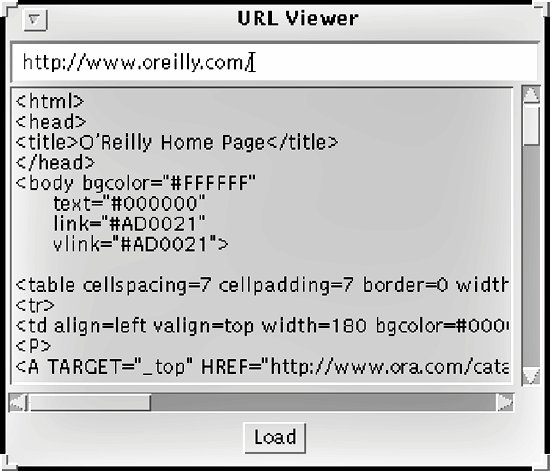 I'll revisit and improve this class in future chapters using techniques I haven't discussed yet. In particular, I'll pay much more attention to the issue of character sets and encodings.