As a final example of working with readers and writers, we return for the last time to the FileDumper application last seen in Chapter 18. At that point, we had a GUI program that allowed any file to be opened and interpreted in one of several formats, including ASCII, decimal, hexadecimal, short, regular, and long integers in both big- and little-endian formats, floating point, and double-precision floating point.

In this section, we expand the program to read many different text formats besides ASCII. The user interface must be adjusted to allow a binary choice of whether the file contains text or numeric data. If a user chooses text, a reader reads the file instead of an input stream. We also need a way for the user to pick the text encoding (e.g., MacRoman, Latin-1, Unicode, etc). Since there are several dozen text encodings, the best choice is a list box. All of this can be integrated into the mode panel. Figure 20-1 shows the revised TextModePanel class. The code is given in Example 20-9. Ive added two new public methods, isText( ) and getEncoding( ). The rest of the changes are fairly minor ones to set up the GUI.

Figure 20-1. A mode panel with a list box for encodings 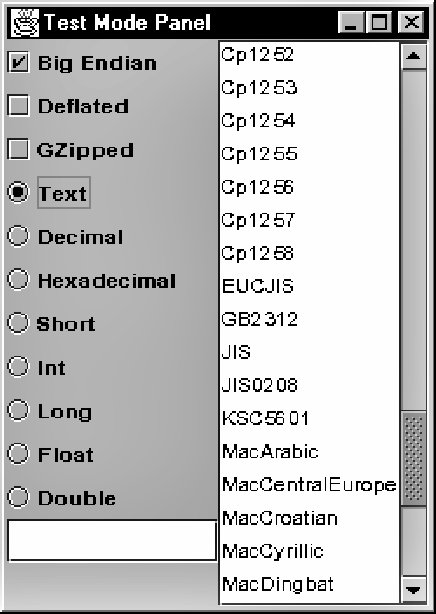 Next we should fix an unrecognized bug in the earlier program. It used an OutputStream to stream data into the text area. It converted the bytes to chars simply by casting them as if they were Latin-1. This works for the simple ASCII output needed to represent numbers, but the whole point of this chapter has been that this hack just doesn work for more realistic text that can include content from many different languages. Thus we need to revise the JStreamedTextArea to stream to a Writer rather than an OutputStream. If anything, this is more straightforward. Example 20-10 demonstrates.

Next we need to expand the FileDumper class to read and write text in a variety of encodings. This is straightforward and only requires one new overloaded dump( ) method, as shown in Example 20-11.

Theres one new method in this class. An overloaded variant of dump( ) can be invoked to dump a text file in a particular encoding. This method accepts an input encoding string and an output encoding string as arguments. These are used to form readers and writers that interpret the bytes read from the file and written onto the output stream. Output encoding is optional. If its omitted, the platforms default encoding is used.

The FileViewer2 class is straightforward. Aside from using a TextModePanel instead of a ModePanel, the only change it really requires is in the actionPerformed( ) method. Here you have to test whether the format is text or numeric and select the dump( ) method accordingly. Example 20-12 illustrates. 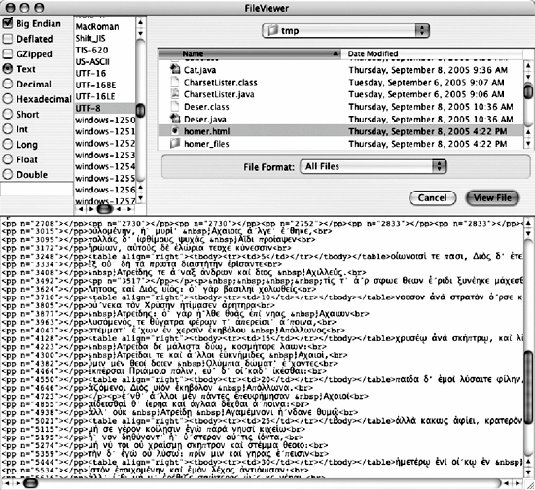 This completes this program, at least as far as it will be taken in this book. You could certainly extend it further. For example, it would be a nice touch to add support for various image formats and perhaps even formatted text like HTML files. However, this would take us too far afield from the topic of this book, so I leave further improvements as exercises for the motivated reader.