In Chapter 4, I introduced a FileDumper program that could print the raw bytes of a file in ASCII, hexadecimal, or decimal. In this chapter, I'm going to expand that program so that it can interpret the file as containing binary numbers of varying widths. In particular, I'm going to make it possible to dump a file as shorts, unsigned shorts, ints, longs, floats, and doubles. Integer types may be either big-endian or little-endian. The main class, FileDumper3, is shown in Example 8-7. As in Chapter 4, this program reads a series of filenames and arguments from the command line in the main( ) method. Each filename is passed to a method that opens a file input stream from the file. Depending on the command-line arguments, a particular subclass of DumpFilter from Chapter 6 is selected and chained to the input stream. Finally, the StreamCopier.copy( ) method pours data from the input stream onto System.out.

The main( ) method of this class reads the command-line arguments and uses the switches to determine the format of the input data. The dump( ) method reads the mode and the endianness, selects the appropriate filter, and copies the input onto the output. Table 8-2 shows the command-line switches. Eight of these switches select a particular format. One of them, -little, specifies the endianness of the data. Since there's no difference between big-endian and little-endian ASCII, decimal, and hexadecimal dumps, a total of 12 different filters are used here. Two of the switches, the HexFilter and the DecimalFilter, were introduced in Chapter 6. They haven't changed. 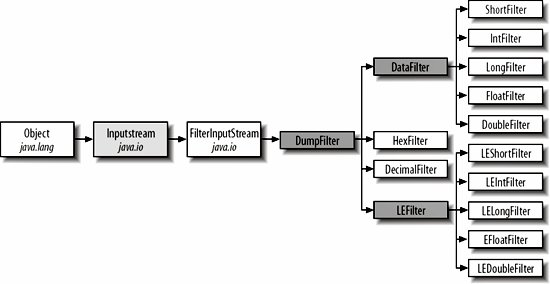 DataFilter makes sure that a data input stream is available to subclasses to read from. It also has enough information to provide a reasonable available( ) method. The actual implementation of the fill( ) method is left to specific subclasses like IntFilter. LEFilter, shwon in Example 8-9, is identical except for its use of a LittleEndianInputStream in place of a DataInputStream.

The concrete subclasses of these two classes are all very similar. Example 8-10 shows the simplest, IntFilter.

The fill( ) method reads an integer from the underlying DataInputStream din. That integer is converted to a string using the static Integer.toString( ) method. The string is then converted to bytes using the ISO 8859-1 (Latin-1) encoding.

The remaining DataFilter subclasses are very similar. For example, Example 8-11 shows the ShortFilter. Aside from the trivial difference in the class and constructor name, the only real difference is the use of readShort( ) instead of readInt() in the first line of the fill( ) method.

The LongFilter, FloatFilter, and DoubleFilter are only slightly different, so I haven't put the source code in the book; it's available, with the rest of the examples, online. Likewise, I've omitted the similar set of filters for little-endian data. The little-endian filters all extend LEFilter; they are LEIntFilter, LEShortFilter, LELongFilter, LEFloatFilter, and LEDoubleFilter.

In later chapters, I'll add support for compressed and encrypted files, a graphical user interface, and various text interpretations of the data in a file. However, none of that will require changes to any of the filters we've developed here.