Security is about finding a balance, as all systems have limits. No one person or company has unlimited funds to secure everything, and we cannot always take the most secure approach. One way to secure a system from network attack is to unplug it and make it a standalone system. Although this system would be relatively secure from Internet-based attackers, its usability would be substantially reduced. The opposite approach of plugging it in directly to the Internet without any firewall, antivirus, or security patches would make it extremely vulnerable, yet highly accessible. So, here again, you see that the job of security professionals is to find a balance somewhere between security and usability. Figure 1.1 demonstrates this concept. 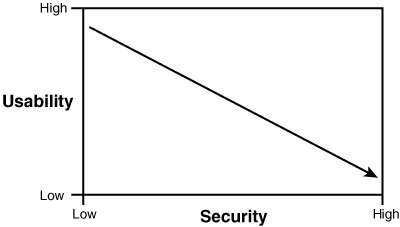 To find this balance, you need to know what the goals of the organization are, what security is, and how to measure the threats to security. The next section discusses the goals of security.

There are many ways in which security can be achieved, but it's universally agreed that the security triad of confidentiality, integrity, and availability (CIA) form the basic building blocks of any good security initiative.

Integrity is the second piece of the CIA security triad. Integrity provides for the correctness of information. It allows users of information to have confidence in its correctness. Correctness doesn't mean that the data is accurate, just that it hasn't been modified in storage or transit. Integrity can apply to paper or electronic documents. It is much easier to verify the integrity of a paper document than an electronic one. Integrity in electronic documents and data is much more difficult to protect than in paper ones. Integrity must be protected in two modes: storage and transit.

Information in storage can be protected if you use access and audit controls. Cryptography can also protect information in storage through the use of hashing algorithms. Real-life examples of this technology can be seen in programs such as Tripwire, MD5Sum, and Windows File Protection (WFP). Integrity in transit can be ensured primarily by the protocols used to transport the data. These security controls include hashing and cryptography.

Availability is the third leg of the CIA triad. Availability simply means that when a legitimate user needs the information, it should be available. As an example, access to a backup facility 24x7 does not help if there are no updated backups from which to restore. Backups are one of the ways that availability is ensured. Backups provide a copy of critical information should files and data be destroyed or equipment fail. Failover equipment is another way to ensure availability. Systems such as redundant array of inexpensive disks (RAID) and subscription services such as redundant sites (hot, cold, and warm) are two other examples. Disaster recovery is tied closely to availability, as it's all about getting critical systems up and running quickly. Denial of service (DoS) is an attack against availability. Although these attacks might not give access to the attacker, they do deny legitimate users the access they require.

As with any new technology topic, terminology is used that must be learned to better understand the field. To be a security professional, you need to understand the relationship between threats, assets, and vulnerabilities.

Risk is the probability or likelihood of the occurrence or realization of a threat. There are three basic elements of risk: assets, threats, and vulnerabilities. Let's discuss each of these.

An asset is any item of economic value owned by an individual or corporation. Assets can be realsuch as routers, servers, hard drives, and laptopsor assets can be virtual, such as formulas, databases, spreadsheets, trade secrets, and processing time. Regardless of the type of asset discussed, if the asset is lost, damaged, or compromised, there can be an economic cost to the organization.

A threat is any agent, condition, or circumstance that could potentially cause harm, loss, damage, or compromise to an IT asset or data asset. From a security professional's perspective, threats can be categorized as events that can affect the confidentiality, integrity, or availability of the organization's assets. These threats can result in destruction, disclosure, modification, corruption of data, or denial of service. Some examples of the types of threats an organization can face include the following:

If the organization is vulnerable to any of these threats, there is an increased risk of successful attack.

Vulnerabilities and weaknesses are common with software mainly because there isn't any perfect software or code in existence. Vulnerabilities in software can be found in each of the following:

Vulnerabilities are not the only concern the ethical hacker will have. Exploits are a big concern, as they are a common mechanism used to gain access. That's discussed next.

An exploit refers to a piece of software, tool, or technique that takes advantage of a vulnerability that leads to privilege escalation, loss of integrity, or denial of service on a computer system. Exploits are dangerous because all software has vulnerabilities; hackers and perpetrators know that there are vulnerabilities and seek to take advantage of them. Although most organizations attempt to find and fix vulnerabilities, some organizations lack sufficient funds for securing their networks. Even those that do are burdened with the fact that there is a window between when a vulnerability is discovered and when a patch is available to prevent the exploit. The more critical the server, the slower it is typically patched. Management might be afraid of interrupting the server or afraid that the patch might affect stability or performance. Finally, the time required to deploy and install the software patch on production servers and workstations exposes an organization's IT infrastructure to an additional period of risk.