Client 3Updating the Database with a DataSet

The third client that I want to show you is based on client2you can keep all of the work that you put into laying out a nice-looking application and just add a few lines of VB code here and there. client3 looks very much like client2it's a general purpose interactive query processorbut client3 lets you change the result set data displayed in the grid and write those changes back to the database. I'll add two buttons (Commit and Rollback) but those buttons remain disabled until you change a value in the grid (see Figure 18.6). 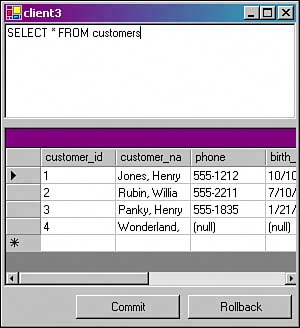 To start, make room for two buttons near the bottom of the form (you may have to drag the DataGrid to a new location before you can get to the bottom of the grid). Now add the Rollback button to the lower-right corner of the form: Open the Windows Forms tab (in the Toolbox), click the Button tool, and drag out a rectangle where you want the button to live. Change the name of the button to m_rollback and change the Text property to Rollback. When the user clicks the Rollback button, client3 will discard all changes. It's a little misleading to show the user a button named Rollback when he hasn't actually made any changes, so set m_rollback's Enabled property to False. (We'll enable the button as soon as the user makes a change.) Add a second button named m_commit and change its Text property to Commit. When the user clicks this button, client3 will (try to) save all changes back to the database. Again, we'll enable this button when the user changes a value in the grid, so set m_commit's Enabled property to False.

A DataAdapter (specifically, an NpgsqlDataAdapter) can hold a reference to four different DataCommand objects: a SelectCommand, an InsertCommand, an UpdateCommand, and a DeleteCommand. When the user clicks the Commit button, your DataAdapter (m_da) holds a reference to a SelectCommand (the command entered by the user), but the other three command references are empty. Npgsql has a class that can build the INSERT, UPDATE, and DELETE commands for you: the NpgsqlCommandBuilder. An NpgsqlCommandBuilder object performs its magic by examining the layout of a DataRow. For example, if you have an NpgsqlCommandBuilder named builder, you can extract an UPDATE command like this:

Now that you have most of the pieces of the puzzle, you're ready to write the commit_Click() subroutine. This subroutine (see Listing 18.7) is called when the user clicks the Commit button.

There's only one step left to complete this client: Enable the Commit and Rollback buttons when the user changes a value in the DataGrid. An object of type DataSet fires a series of events when you modify one of the values that it holds. We'll create a handler for the Commit_Changed event and tell VB to call that handler whenever your DataSet (m_ds) fires that event. The handler (see Listing 18.8) simply sets the Enabled property for each button.

To wire this subroutine into the VB event handling scheme, you must execute an AddHandler command, but knowing when to execute that command is a bit tricky. Look back at Listing 18.4 ("Creating a New DataSet"). That subroutine (m_cmdText KeyUp) takes care of creating a new DataSet and filling that DataSet with a result set built from the command that the user typed in. Because you're creating a new DataSet for each command, you'll have to add the Column_Changed event handler to each DataSet. The new version of m_cmdText_KeyUp is shown in Listing 18.9 (the only difference is that I've added an AddHandler command at line 7).

That's it. You have a client application that lets you enter SELECT commands, view the results, change the results, and write those changes back to the database.

Go ahead and try it outtype in a few queries, change the result set, and check out the Commit and Rollback buttons. When you've had enough fun, I'll show you a few problems with the way I've designed client3, and (better yet) I'll show you how to fix them.

Part I: General PostgreSQL Use

Introduction to PostgreSQL and SQL

Working with Data in PostgreSQL

PostgreSQL SQL Syntax and Use

Using PostgreSQL with Tcl and Tcl/Tk