You ve also seen how to manage user accounts and groups via the User Manager, and you ve seen how Fedora Core stores this user information in the configuration files /etc/passwd , /etc/shadow , and /etc/ group .

It s evident that these configuration files are just plain text files, and perhaps you re tempted to put aside the User Manager and edit those files manually, using a text editor such as gedit . It is quite possible to manage your user information this way, but it is safer to use the User Manager or the CLI commands instead. First, the files are of critical importance to the successful execution of your Fedora Core installation, and their integrity must be ensured at all times. The tools are designed to ensure the integrity of these files, but if you edit them manually you are on your own. Second, the tools carry out proper file locking . This is a mechanism that prevents overwriting problems in a situation where several administrators try to manage users at the same time. It is definitely convenient to be able to examine these configuration files, but when you need to make adjustments to them, it s safest to use the designated tools ”the graphical User Manager interface that you ve already seen, and the command line tools that are examined next .

If you plan to use the command line tools to manage your users and groups, you ll need to do so in the context of the root account. Having fired up a terminal window, there are a few clues to remind you which account you re logged in as ”remember that the typical root shell prompt is denoted with the # character, while the prompt for an ordinary user account is denoted with $ or >.

You can also use the id command to check your identity:

This output shows that the user is logged in as the eziodm account. (Note that it also confirms information about the account s group membership ”in particular, that its primary group is also called eziodm and that the user is a member of two groups, eziodm and authors.)

To run in the context of the root account in a terminal window, simply execute the switch user ( su ) command at the command line:

You ll be prompted to type the root password, as shown. The effect of the su command is to execute a new shell under a different user account. Note that the new shell isn t a substitute for the existing shell. Instead, the new shell runs on top of the existing shell. To demonstrate this point, take a look at Figure 7-13, which shows a user switching from eziodm to root, using the root shell, and then leaving it.

Note that the su command here is accompanied by a dash ( “) symbol. This ensures that the new shell is treated just like any other login shell. In particular, it means that the login scripts associated to the user account ( root , in this case) will be executed just as if root were logging in from a terminal. These scripts have a number of effects. For example, in this case, they do the following:

If the dash character (-) is omitted, the su command will execute a shell but will not execute the login scripts.

We re now ready to add new users to the system using the command line.

Adding Users at the Command Line

Adding users can be a straightforward task on a standalone PC, but when you re a professional system administrator with a lot of settings to get through, the graphical User Manager tool can make the task a time-consuming one.

Try It Out Adding Users with the Command Line Interface

In its simplest form, here s the sequence of commands that replicates the behavior of the graphical tool, using default values when possible.

The useradd command creates a new user called markm. The description, Mark Mamone , is delimited by single quotation marks to instruct the shell to keep it as a single parameter. The shell is /bin/bash :

Other aspects of the account are determined automatically from the system defaults and from the arguments specified. By default, the home directory will be /home/markm; the UID and GID will be the first available (in this case, 503 and 504, respectively); and the account and password expiration data are taken from /etc/login.defs and /etc/default/useradd .

You might be surprised to find that the newly created home directory is not empty. Its content is copied from the /etc/skel directory, which contains the files and directories that should be added to a new home directory whenever a new user account is created. This is a particularly handy feature for the system administrator: if every user needs a similar setup, it is sufficient to put the desired files in /etc/skel .

Other defaults, such as password-aging values, are taken from /etc/login.defs .

More on the useradd and passwd Commands

The useradd command has several options that you can use when the defaults are not appropriate. More details are available by typing man useradd in a terminal. The following table provides a list of the most commonly used options.

You can use the passwd command whenever a password needs to be changed or initialized . Of course, normal (non-root) users are allowed to change only their own passwords ”they can do this via the passwd command. Root users can change anyone s password, and to do that they can specify the passwd command followed by the account name (as you saw in Step 3 of the Adding Users with the Command Line Interface example).

Once a user account has been created, its owner has a certain degree of control over it. Not surprisingly, Fedora Core has graphical and command line tools, and account owners can change things such as the password, account description, and shell.

As you ll see in the following two examples, the basic steps for changing your password are identical whether you use the GUI or the command line procedure.

To change your password via the graphical interface, select Main Menu>Preferences>Password or type userpasswd in a terminal window. The dialog box shown in Figure 7-14 appears. For security reasons, you ll have to type your old password first.

Then you ll be prompted twice for the new password (see Figure 7-15). 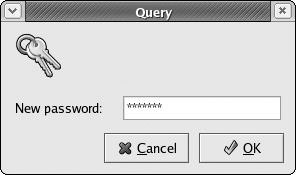 If you type the same password twice, and it is not too short or based on a dictionary word, the new password will be accepted. Remember, it is a good idea to change your password regularly, especially if your computer is shared with somebody else, even if the system does not enforce password expiration.

To change your password via the command line, you can use the passwd command. You ll first be challenged to enter your current password ”again, this is to ensure you have the right to change it:

Because ape5 is too short, try elephant6 instead:

The passwd command won t accept dictionary-based passwords either: it has a built-in mechanism that prevents you from choosing passwords that can be easily guessed. Try something a little more complex, such as e!eph4nt :

As you can see, the steps in the command line procedure are identical to those of the GUI-based procedure.

Finally, remember that if a normal user, such as eziodm, forgets his or her password, root can run the following command to reset it to a known value:

Red Hat Linux also provides GUI and CLI utilities that allow users to control other aspects of their account. You can launch the GUI utility by selecting Main Menu>Preferences>About Myself, or by typing userinfo at the command line. This brings up the User Information dialog box shown in Figure 7-16. 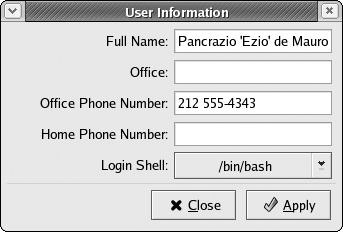 With this dialog box, you can edit the system s record of your name and add contact information, if you wish. All this information is then stored (in comma-separated format) in the description field of the record in /etc/passwd , like this:

You can also use this dialog box to change your login shell. Note that it is not possible to choose a shell that is not in the list. When you re finished, just click Apply to confirm (if you want to discard your changes, click Close instead). If you modify and confirm anything, the tool asks for your password to verify your identity.

To change the login shell, you can use the chsh command, which works in a very similar way:

If you want to return to your previous shell, just run chsh again and specify the original one:

You can find out more about chfn and chsh by consulting their manuals from a terminal with man chfn and man chsh .

When you need to adopt the root account and apply changes to another account, the best tool to use is dependent on the changes you need to make. Some of the more common operations (such as account or password expiry) are easy to perform using the User Manager (you select the account and then press the Properties button).

However, if you need to make more major changes to an account (such as changing the UID), the User Manager is not enough. In fact, you can t even use the CLI-based commands such as the passwd , chfn , and chsh utilities to change the UID of an account.

If you absolutely must change an account home directory, UID, GID, or even login name, here s how to do it using usermod on the command line. Remember, you have to be logged in as root to do this. Suppose you have the following user in /etc/passwd :

If you want to rename the account from eziodm to eziod, you can run usermod , like this:

We ve used the -l option to indicate that we want to change the login name, and we specify the new login name before the existing one. As a result, the record for this user in /etc/passwd changes to the following:

As you can see, the account has preserved its UID, description, home directory, and so on. If you want to change the location of the user s home directory, you can run this command after the previous one:

Here s how to read this command:

Deleting user accounts is all too easy. In the User Manager graphical interface, you can delete a user simply by selecting the user in the Users tab, and then clicking the Delete button.

From the root command line, you can run userdel . Using the command like this will erase the account called test from /etc/passwd , but the associated home directory will not be deleted:

If you also specify the -r option, the account information, home directory, and mailbox will also be destroyed: