Ownership and How It Works

As you’ve seen, Administrators and members of a few other select groups are the only ones who can grant and change permissions. The exception is when a user is the owner of the folder or file in question. Every object on an NTFS partition has an owner, and the owner is the person who created the file or folder. The owner controls access to the file or folder and can keep out anyone he or she chooses.

For example, Wally (a user) creates a folder on his computer called My Private Stuff. After creating the folder, he right-clicks the folder, chooses Properties, and then clicks the Security tab (Figure 10-10). 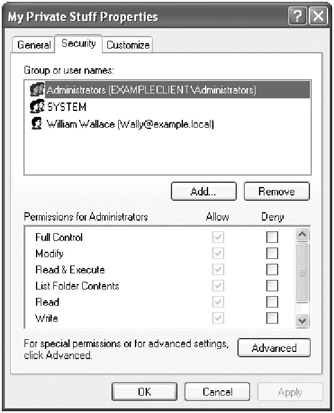 Figure 10-10: Viewing the NTFS permissions for a new folder.

Wally sees that the Administrators group has full access to his folder, but because he is the owner of the folder, he can change the permissions so that he has the folder all to himself. He clicks Advanced to open the Advanced Security Settings dialog box and clears the Inherit From Parent check box (Figure 10-11). 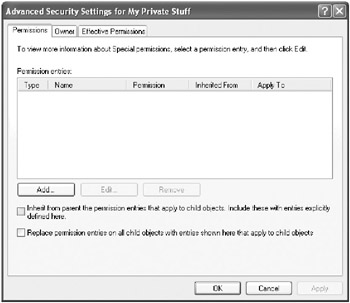 When the Security dialog box appears, Wally clicks Remove to remove the permission entries that were previously applied from the parent. After clicking Remove and accepting the security warning, Wally clicks OK and a Security warning appears indicating that everyone has been denied access to the folder. Wally clicks Yes to continue and returns to the Properties dialog box. He clicks the Add button and adds his user account with Full Control. After this is done, even the administrator receives an Access Denied message when trying to open the folder.

Of course, nothing on the network can be completely beyond the reach of administrators, so an administrator can change the ownership by following these steps:

When Wally logs on the next time, he still has access to My Private Stuff. If he opens the Properties dialog box, clicks the Security tab, clicks Advanced and then clicks the Owner tab, he sees that he’s no longer the only user with Full Control. Changing the ownership of the folder doesn’t automatically give administrators access to the contents of the folder, but ownership does grant the ability to read and change permissions. With that, an administrator can change permissions and attain access to the folder contents.