CHARACTERIZATION OF OLAP OPERATORS ON HIERARCHIES

Recently different authors proposed a set of OLAP operators, which are defined on the data cube and which produce a new cube as output (see Codd, Codd, & Salley, 1993; Agrawal, Gupta, & Sarawagi, 1997; OLAP Council, 1997; Cabibbo & Torlone, 1998). In this section, we discuss the operators involved in manipulating dimensions with hierarchies in order to introduce some important modifications and specializations.

As mentioned above, this operator decreases the detail of the measure, aggregating it along the dimension hierarchy. A problem arises when a variable relative to a level of the hierarchy is not complete (i.e., in the case of a partial classification hierarchy).

Example 6: Let us consider the data cube represented in Example 2. In Figure 11, its "multidimensional" view is illustrated. 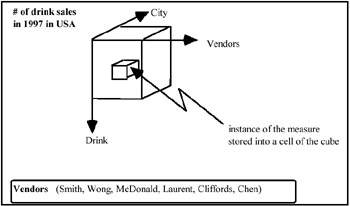 Figure 11: A Multidimensional View of the Drink Sales Data Cube

Let us suppose to formulate a query defined as below:

This query is solved in the following way:

Note that in some cells of the resulting cube (see Figure 12), null values can appear. This demonstrates that some instances of "Vendors" are not defined. 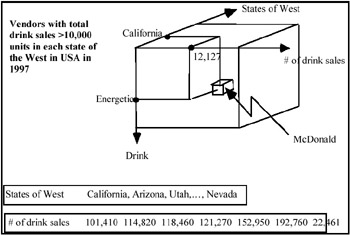 Figure 12: The result of the query

Let us suppose, now, that the classification hierarchy relative to "Region → State → City" has, as domains, the cities of California, but with only the instances "San Francisco, San Jose, San Diego." This is a subset of the primitive domain of City, in which all the cities of California (San Francisco, San Jose, San Diego, Fresco, Los Angeles, etc.) are stored.

In particular, when the roll-up operator from City to State is applied, no information about the non-completeness of the City domain relative to California is stored. This means that for California, the number of vendors for which the total drinks sold in 1990 is >10,000 units refers only to the cities of San Francisco, San Jose, and San Diego, and not to all the cities in California. Therefore, since this information is not specified anywhere, the answer for this state is wrong.

As mentioned above, the slice operator reduces the dimensions (or cardinality) of a cube by eliminating one dimension through its multidimensional space. This fact is not always true because, if we delete a dimension whose domain is a subset of the primitive domain, we lose information and the resulting cube of this operation contains incorrect data.

Before discussing this situation, we need to introduce the implicit dimension definition.

Definition: We call any dimension of a data cube which has only one instance in its definition domain an implicit dimension. This instance can be one value or multi-valued.

Let us suppose that the following query is carried out:"Give me the drink sales in all Cities by Class and Vendor"It is solved in the following way:

In this case if the slice operator deletes the dimension Year, the result seems to refer to the whole primitive domain of Year. This means that we lose the exact information on the real period to which the result should refer. To overcome this mistake, a specialization of the slice operator, called Implicit Slice (or I-Slice) was introduced (see Chapter 2). We remember its definition below.

Similarly to the solution proposed for the roll-up operator, the same Note is added to the title of the cube.

In accordance with this definition, the above query is now solved in the following way:

The result is a cube with the same dimensions as the primary one, where the title becomes "Drink sales by Class, Vendor, and Year where Year is a subset of the primitive domain." For the symmetric reasoning of terminology, we use the term Total Slice (or T-Slice) for the well-known slice operator.

If, instead, the Year domain in the cube under consideration coincided with its primitive domain, the previous query would be solved in the following way:

The cardinality of the resulting cube is now decreased by one dimension, since, by removing Year, no information is lost.

Beginning Cryptography with Java
Inside Network Security Assessment: Guarding Your IT Infrastructure
Visual C# 2005 How to Program (2nd Edition)
Postfix: The Definitive Guide
Making Sense of Change Management: A Complete Guide to the Models, Tools and Techniques of Organizational Change
Ruby Cookbook (Cookbooks (OReilly))
flylib.com © 2008-2017.
If you may any questions please contact us: flylib@qtcs.net
Privacy policy
This website uses cookies. Click here to find out more.
Accept cookies