Comparative evaluation of the proposed model has been carried out through simulation using the Nokia Mobile Internet Toolkit 3.0. [15] The Toolkit window, along with a snippet of ASP coding, is shown in Figure 20.5. Toolkit keeps a time record of all outgoing requests, measured in milliseconds, starting from the time of the initial request to the time a response is received. A time-out failure occurs if Toolkit does not receive a response within a specified number of milliseconds (the time-out value). By default, the time-out value is set to 2000 milliseconds. This value can be increased for slower network environments.[16] 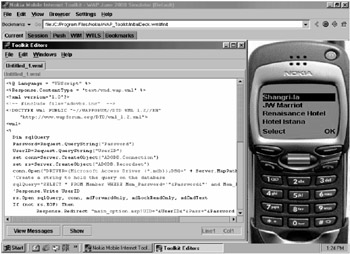 We can restrict the number of users in the WAP gateway. On separate simulation runs, the simulator measured and compared the response time taken with the number of active connections. The results are shown in Figure 20.6. The WAP model is seen to have a much-better response time than the Potential Conflict Graph (PCG) method and the site-graph method, [17], [18] particularly for a large number of active connections.

The simulator also measured the percentage of active users during a certain period of time for PCG, site-graph, and our WAP model. The result of these measurements, shown in Figure 20.7, again suggest that the performance of our proposed WAP model is better, especially when the number of active connections increases, as compared to the other two analytical models reported in Breitbart et al. [19] and Lim and coworkers. [20]

Figure 20.7: Comparison of the percentage of completion with number of active connections.