There are not many differences between how you perform the build/debug process in Visual Studio .NET and previous versions of Visual Studio. There are, however, several internal differences that allow debugging across languages now that all the compilers are integrated. It is possible with the new debugger to debug Visual Basic, Visual C++, C#, the Managed Extensions for C++, script, and SQL.

Perhaps the greatest change with the debugging process lies within the IDE itself. As mentioned before, any of the debugging windows in the IDE can now be hidden along the edges of the main window, and a simple hover of the mouse will bring them into view. Also, the four watch windows are now completely independent of one another, and you can finally have up to four different memory view windows, compared to the one you were limited to in the previous version of Visual Studio.

One addition to the debugging process, which Visual C++ developers haven't had but other languages in the Visual Studio family have had for a long time, is an Immediate window. The Immediate window allows you to change variables and execute simple commands during runtime while you are debugging.

Other new features include the following: 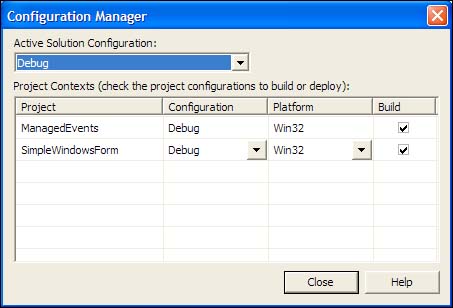 As indicated earlier, you can build an entire solution with a single command. You can also selectively build any project within the solution by selecting it in the Solution Explorer and building it directly.

As you can imagine, building a solution with several projects of different types can cause a lot of errors during the build process. Visual Studio .NET includes a nice feature known as the Task List, shown in Figure 1.9, that keeps track of all the errors that need to be resolved. In some languages, such as VB .NET, the Task List keeps an up-to-date list of items that need to be resolved. With Visual C++ .NET, the build process is required to produce the tasks.

Figure 1.9. The Task List with errors in Visual Studio .NET. 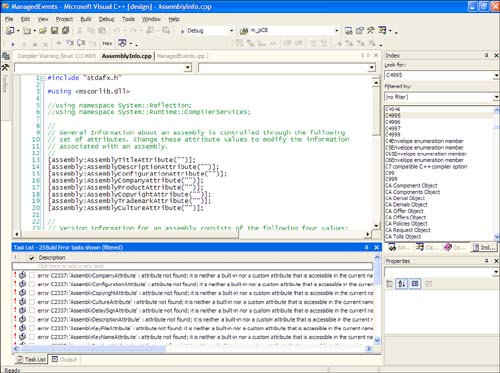