Chronological presentations are organized by time and progress from beginning to end. The unit of measurement can be seconds, minutes, hours, days, weeks, months, years, decades, centuries, and millennia. The movie JKF, most programs on the History Channel, and the acclaimed scientific series Walking With Dinosaurs are examples of masterful use of chronological events to tell the story in a logical or meaningful manner.

Chronological presentations are often used to tell a story. For example, the book The Critical Path tells the dramatic story of Chrysler's survival, and Five Days in London tells the story of how Winston Churchill persuaded the war cabinet not to capitulate to Hitler. In terms of an economic example, a speaker could open with a "now" perspective, such as, "Today, interest rates for home mortgages are the lowest they have been in 50 years. How did we get here? Let's go back to 1953 and examine what happened." Then, with a simple timeline, tick off key developments on watershed years. This gives a flow of continuity and brings cohesiveness to your message. As a side note, in this kind of presentation, it can become deadly dull if all you do is reel off years and statistics. For color and depth, mention an occasional "scene-setting" event. For example, "In 1959, the Russians shocked the world with the launch of Sputnik, the first manmade satellite to orbit the Earth. In that same year, interest rates shot up as well…"

Speakers can use a similar device. Lance Armstrong, for example, could hold us spellbound if he merely took us on a stage-by-stage journey along the route of the Tour de France. It would have far more impact if listeners were invited to travel with him geographically through his story than if he skipped around.

Analytical presentations analyze the topic, divide it into meaningful sub-topics, and demonstrate the relationship between them. For example, "High-performance teams have the following eight characteristics…" or, "The three disciplines of market leaders are…"

Each sub-topic is supported by empirical evidence—the better the evidence, the better the presentation. Excellent evidence is surprising or unexpected, and the listener is rewarded by hearing the depth of the evidence and the thoroughness of the research.

Functional explanations help to deepen one's understanding and appreciation of how things work or the benefits to be derived by using a particular product or procedure. Speakers like Susan Sweeney and Jim Carole help their audiences understand and appreciate various aspects of the Internet and E-commerce. Or just flip on your television in the wee hours of the morning and you will be bombarded with speakers using functional organization: There is one on every infomercial. This is their stock-in-trade. After 30 minutes, they have told you every possible use of their product (and then some). They hold nothing back. If there is a function, you've heard about it by the time they finish.

Contrasts and comparisons actually work well together. For example, Dr. Janet Lapp uses the power of contrasts and comparisons to help explain how Americans and Canadians are similar and different. She also uses humor when advising Canadians who speak in America and for Americans who speak in Canada. A subset of contrasts is doing a pro and con analysis. For example, suppose your company is equally divided over starting a marketing campaign now, because the competition is slowly taking market share away from your division's product, versus waiting six months to implement the plan, because a new innovative product is under development. We have found that when a topic spurs strongly held opposing points of view, it is desirable to first get agreement on common ground. Then acknowledge the arguments of the "opposite side" second, and advance your point of view last.

In terms of common ground in the previous example, the presenter may want to reiterate agreed upon principles of effective decision-making, the need to balance short-term and long-term goals, and the company's mission to be both innovative and profitable. The presenter would then consider the arguments for increasing advertising now: Market share lost now may never be made up, the company's board of directors and shareholders are becoming increasingly upset by decreasing market share, and the industry's yearly market share report will be published in six months. The presenter then presents the opposing point of view that the new product could become the new industry standard, but to be successful it will need every advertising dollar that the company can put behind it, including this year's entire advertising budget. Second, the company has a reputation of bringing innovate products to market and is overdue for a product that is a direct hit. Third, most companies fail because they overemphasize short-term profits for long-term growth.

The metaphorical presentation uses something that is well-known and understood to help the attendees understand something that is less well-known and understood. For example, Greg Levoy uses the concept of connecting the dots in his presentation Callings. The metaphor of connecting the dots means that we have life experiences that are exceptionally meaningful for us. When we "connect the dots," that is, discover the deeper significance that can be derived from figuring out the relationship among these various meaningful life experiences, we discover our calling. It is in connecting the dots that the picture, or in this case, our calling, emerges stronger and more clearly focused.

Alan Parisse[1] states that "the challenge of a presenter is to move from simplicity to complexity and then back to simplicity with depth." Metaphors are a good way to do this. Metaphors are also an excellent way to make your presentations truly universal, deeply personal, and imminently memorable.

Mixed structures use various combinations of the seven methods that were previously presented. For example, Master Presenter Terry Paulson uses the story of how air transportation has changed to anchor his topic of change management. He uses pictures and words (Figure 3-1 and Figure 3-2) to illustrate the changes the role of stewardess has undergone since the 1930s. 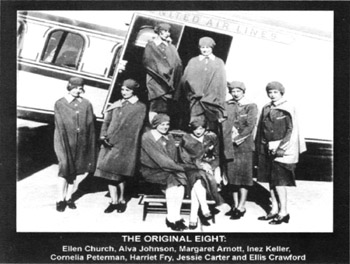 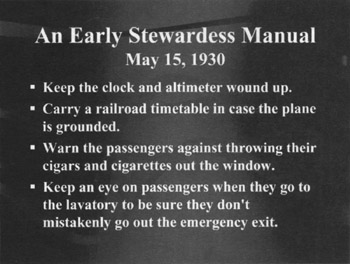 The slides that Terry uses demonstrate that progress entails change. We can look at the information Terry presents both chronologically and metaphorically. If we look at the information chronologically, we can clearly see that how flight attendants did their jobs in the early days of flying in very different from the way that job is carried out today. At a metaphorical level, these slides represent the changes we must all undergo in order to progress. Terry uses these slides to anchor the topic of change management both chronologically and metaphorically. In this case, the mixed structure works beautifully. It was fun and so unique that it is remembered as vividly today as when it was presented a number of years ago.

[1]Alan Parisse, CSP, CPAE, speaks on Change and Leadership and has been rated as one of the top 21 speakers for the 21st century by Successful Meetings magazine, December, 1999.

The Exceptional Presenter: A Proven Formula to Open Up and Own the Room

Confessions of a Public Speaker (English and English Edition)