Let us consider a presentation on the solar system using Microsoft PowerPoint. Text may be used in slides to introduce information of each planet such as the name, the size, average temperature, distance to the sun and the earth, its orbit and moving speed. For viewing the moving solar system, the existing solution is to make a scaled-down model of the solar system containing the sun and all planets, with the complicated mechanical configuration and step motors to control their movement. This way is very expensive but works well. For a large audience, one may take the video of the model. Assume that we have the video in MPEG format. We can easily insert it into the PowerPoint. However, the problem is that the MPEG video is shot with a fixed camera. It is impossible for users to see from a new viewpoint with a specific viewing direction; and zooming parameters, furthermore, interact with the system. The XML mediator-based animation toolkit can be applied for this purpose. 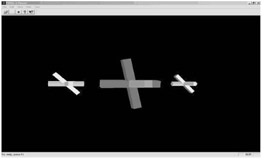 Figure 17.24: Crosses scene with the rotation and revolution motions 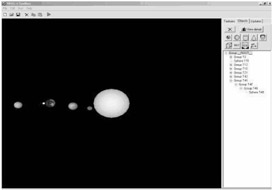 It is clear such a task is a complex animation that requires some interaction with more than one object and the combination of objects and motion in one scene. We can interactively generate this animation using our toolkit. The elaborate operation sequences on the XML database are outlined in Figure 17.23. First, we insert a static solar system model to a scene having stars background, by applying a query on the model table. The query results of 3D models are available in MPEG-4 format, in the database (Figure 17.25). Next, the rotation and revolution motions are selected by applying queries on the motion table. In the current animation database, the required rotation and revolution motions are available in VRML format (Figure 17.24). The selected rotation and revolution motions are applied to the solar system model, using the motion adjustment operations. Last, the resulting animation is generated in the required format (Microsoft PowerPoint in this example). The results of the operation sequences on the animation databases are shown in Figure 17.26 and Figure 17.27. 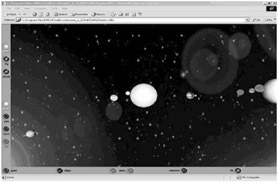 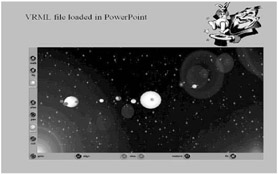 Thus, the animation result will look the same as the video but allow the viewers to interactively see it from any viewpoint. Users can interact with the animation and see the configuration of the solar system at any specific time and simulation of any period by inputting the timing. In the next subsection, we can see that the extensive operation sequences are applied on the XML database through the Graphical User Interfaces (GUIs) and hence a user need not even remember the syntax of the operations to be carried out.