The most effective method to design a secure infrastructure is to employ a modular design principle. By employing a modular design, you gain the benefit of being able to plan and implement the security requirements of each module on a module-by-module basis, instead of trying to address the security needs of the network as a whole, which can be a daunting task. You also gain the ability to group common network devices into easier-to-manage modules, and then address the security relationship among the modules as opposed to among the individual devices.

In the broad sense, there is a three-tiered design model that should be used when planning and implementing the enterprise campus infrastructure. At the top of the design model is the core network layer, which is designed explicitly to facilitate communications throughout the entire enterprise. In the middle is the distribution network layer, which exists primarily as the location within the network where traffic and security are controlled and managed. As the name implies, the distribution layer is responsible for coordinating the traffic to and from end systems. At the bottom of the model is the access layer, which is where the users connect to the network itself. Figure 12-2 illustrates the relationship among the three layers . 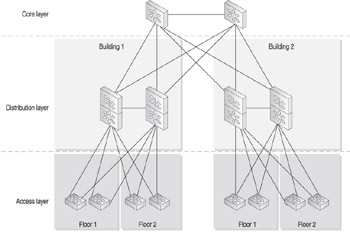 As previously mentioned, the most effective method of putting the three-tiered design model into practice is through a modular design process. We are going to take a look at the following design modules and how they interconnect:

Figure 12-3 illustrates the interaction of the various network modules. 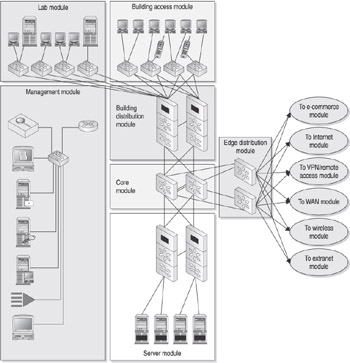 The server module houses those resources that the user community requires access to. The server module contains the file servers, authentication servers (domain controllers), name resolution servers, e-mail servers, departmental servers, application servers, and similar devices. While in principle the servers should be hardened by their respective administrators, there are steps that can be taken at the network level to increase the security of these devices.

Perhaps the most important thing to do at this level is to exercise stringent ACLs to control who has access to a given resource. Because of the nature of server resources, it may be easier to deny access to resources than it is to grant access to resources, which is contrary to the minimalistic security approach employed throughout the rest of the network. The ACLs can be implemented as components of layer 3 switches, routers, or firewalls that control access to the devices in this module.

The server module should also make extensive use of IDS/IPS for the network connections as well as the hosts themselves . Throughout the enterprise the most valuable resources are invariably going to be located here, which makes this module a prime target for attack. Implementing IDS/IPS throughout this module to analyze traffic and generate alarms on suspicious activity is critical to ensuring the security of these resources.

The server module is also an excellent location for implementing private VLANs to control which servers can access each other. This establishes a trust model that ensures that if one server is compromised, it would be difficult for it to be used to attack the remaining servers in this module.

While the most effective design requires that the server module is a separate component from the core module, in smaller environments it may be cost prohibitive to separate these functions. Figure 12-4 details the server module. 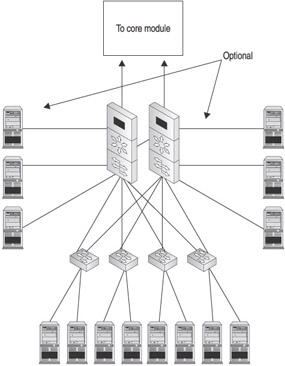 At the entrance to the server module is a pair of redundant layer 3 switches with firewall and NIDS functionality. These devices can be replaced by routers with firewall functionality in smaller environments. Within the server module, servers that require increased bandwidth can be connected directly to the layer 3 switches, while other servers are distributed across access layer switches in the module. This can also be done to reduce the cost of additional access layer switches. All of the servers run HIDS/HIPS software to protect against operating system level exploits.

The building distribution module provides a location that can act as the first line of defense in protecting the rest of the infrastructure against internally sourced attacks. This protection is implemented through the use of VLANs and PVLANs to segment the network and prevent hosts from being able to access other hosts without explicit permission being granted.

The majority of the hardening steps that can be taken in the building access module are going to be the responsibility of the desktop administrators. For the network equipment, we can undertake the same steps as we did for our building distribution module switches. 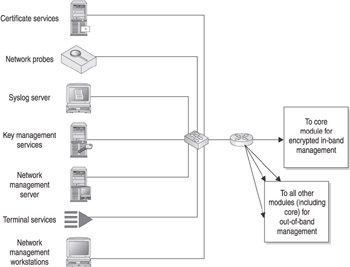 Because the information contained in this module is so critical (for example, device passwords, logging data, and SNMP community strings), it is critical that this module be protected from access from the internal network through the use of a firewall to segment it from the rest of the network. The firewall should accept only IPsec connections, and only from those network devices that require in-band management. All other connection methods should be dropped with ingress filtering. Similarly, you should employ egress filtering that allows access to the production network only when using defined management protocols such as SSH, HTTPS, SNMP, and TFTP, and then provide such access only to defined network devices. Everything else should be dropped.

The corporate lab module represents one of the largest internal threats to our network security due to the fact that so many of the devices in the lab environment are not adequately patched and updated. As a result, I highly recommend that the lab module be physically disconnected from the production network or be treated as a hostile DMZ network.

The Hazard of Connecting the Lab Module to Your Network

I worked at a company that connected their lab environment directly to the corporate network with no access restrictions. When CodeRed hit, over 1,000 unpatched systems in the lab became infected and generated so much ARP traffic as a result of the worm propagation methodology, that it effectively executed a denial of service attack on the network by filling the interface queues on routers throughout the enterprise. The painful lesson that was learned is that no matter how badly R&D claims that they need access to the production network from the lab, they probably don t need it as much as they think they do (i.e., checking e-mail, and so on). Try to find solutions that will allow them to perform the tasks they require while still providing the level of security that is required. For example, you might be able to set up a webmail system and grant access from the lab to that system and that system alone, allowing users in the lab to use the webmail system to check their e-mail.

Being a realist, however, I recognize that you may not be able to keep the lab module disconnected from the rest of the network. The next step then is to mitigate the risks associated with connecting the lab module to the rest of the network by implementing stringent access controls for all traffic passing to and from this module. You should be especially careful about allowing routing information out of the lab environment and into the rest of your production network where it could be propagated and cause problems.