To better understand the value proposition that m-commerce presents to consumers, it is important to identify the m-consumer interaction modes within a wireless environment. By reflecting on the m-consumer's possible activities, one could identify the following entities with which interaction may be required or desired to various degrees:

These entities and interaction modes are illustrated in Figure 2, where the entities are shown in rectangular boxes, examples of these entities are shown in ellipses, and the arrows indicate the direction of the interaction (i.e., who initiated the action). Some interactions, shown by single-directed arrows, are performed solely by one entity and do not necessarily receive a response by other entities (e.g., stock alerts). Other interactions, shown by double-directed arrows, require the active involvement of both parties in a mobile transaction (e.g., mobile retailing or m-tailing). Any of the above types of mobile transactions require at least one entity to be using the wireless channel and may involve some wired participants. Finally, network operators are included in this model but are not linked, because they provide the necessary infrastructure for these relationships to take place or act as facilitators for supporting m-commercerelated activities.

Businesses refer to individuals or organizations that a consumer may need or want to interact with wirelessly for business-related purposes. In addition, consumers may be at the receiving end of an interaction initiated by businesses. For the purposes of this chapter, WB2C is used to refer to this type of interaction, without paying attention to which party initiated the interaction. Some examples of business applications in this area include retail and advertising offers directed at m-consumers. These applications are made available through the combined efforts of all members (excluding customers) of the value network to be introduced in the section "Addressing m-consumer concerns" (see Figure 3). 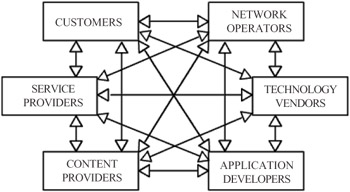 M-consumer refers to individuals that a consumer may need or want to interact with wirelessly for personal purposes. Some examples of this WC2C type of interaction include communications (e.g., SMS or e-mail) and entertainment (e.g., gaming in a multiplayer format).

Personal network refers to the server that a consumer owns and may want to access wirelessly for personal purposes. This type of interaction is identified through the notation WC2. Examples of this type of interaction include a mobile user engaged in wireless communications with his or her home computer and its network, as well as any smart appliances that may be connected to that network (e.g., a refrigerator).