The name "m-commerce" arises from the mobile nature of the wireless environment that supports mobile electronic transactions. Devices, including digital cellular phones, personal digital assistants (PDAs), pagers, notebooks, and even automobiles, can already access the Internet wirelessly and utilize its various capabilities, such as e-mail and Web browsing (Little, 2001). Because m-commerce encompasses any electronic activity that utilizes wireless technology, it may be viewed as a subset of e-commerce. Furthermore, m-commerce and e-commerce share fundamental business principles, but m-commerce acts as another channel through which value can be added to e-commerce processes. It also provides for new ways through which evolving customer needs could potentially be met.

The m-commerce and the e-commerce business environments and activities have much in common. This is the case, because they involve much of the same functionality in terms of facilitating electronic commerce over the Internet. However, some differences exist in the mode of communication, the types of Internet-access devices, the development languages and communication protocols, as well as the enabling technologies used to support each environment. Differences in these four areas are explored below in more detail (Little, 2001).

As indicated in the previous section, the greatest difference between m-commerce and e-commerce lies with what and how technology is being used. In this section, three areas of technology that are fundamental for m-commerce will be examined in further detail: wireless networks, wireless protocols, and wireless devices.

Wireless networks provide the backbone of m-commerce activities. Users can transmit data over these networks between mobile and other computing devices through the use of wireless adapters without requiring a wired connection. The first wireless networks were introduced as early as 1946, but a major milestone was the introduction of the Advanced Mobile Phone System (AMPS) that marked the arrival of cellular systems in 1983 in the United States. The AMPS is an analog system used for voice communication (3GAmericas, 2002). AMPSs represented the first generation of cellular systems (hence, it is commonly referred to as "1G").

The evolution of wireless networks continued with the implementation of second-generation (2G) systems that were introduced in the 1990s. Several of these systems (e.g., TDMA, CDMA, GSM) [1] were also used primarily for voice applications, with the exception of the Short Message Service (SMS) capability offered by the GSM network. A recent upgrade of the 2G networks is referred to as 2.5G wireless networks (e.g., HSCSD, GPRS, EDGE) [2]. Being either circuit-switched or packet-switched, these networks are primarily intended to allow for increases in data transmission rates and, in the case of packet-switched networks, an "always-on" connection (Peck, 2001).

The hype surrounding wireless networks, however, revolves around the third-generation (3G) systems, expected to be deployed over the next few years, with certain regions already having access to them (e.g., Japan). These networks are commonly referred to as IMT-2000 on a global scale, and regional implementations are uniquely named (e.g., CDMA2000 in North America, W-CDMA/UMTS in Europe and Japan, cdmaOne in Japan). [3] Along with voice functionality, 3G networks support higher-speed transmissions for high-quality audio and video enabled through high-bandwidth data transfers, as well as provide a global "always-on" roaming capability (Peck, 2001).

Shown in Table 1 are wireless network technologies that are currently in use or are expected to be rolled out in the regions of North America, Europe, and Japan (Peck, 2001). In Figure 1, the path to the anticipated ubiquitous 3G environment is illustrated (ITU, 2001). 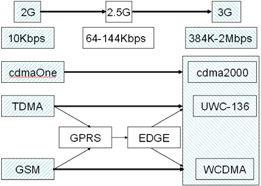 While wireless networks evolved, the two main communication protocols, WAP and i-mode, experienced their own evolutions. Phone.com, Ericsson, Motorola, and Nokia introduced WAP in 1997. WAP progressed from enabling basic functionality, such as WML and WMLScript communications, in its first release, to supporting graphics, voice-enabled actions (i.e., wireless Web browsing), and video, as announced in the release of WAP 2.0, at the end of July 2001 (WAP Forum, 2001). On the other hand, i-mode was introduced in 1999 by NTT DoCoMo and has grown in popularity to support 30 million users in less than three years. The capabilities of i-mode were enhanced during 2001 through the introduction of i-appli, which incorporates JAVA and Secure Socket Layer (SSL) encryption capabilities; i-area, which provides location-specific information such as weather, local guide, maps; and traffic; and i-motion, which enables the viewing of video clips (NTT, 2002).

Until recently, wireless devices could be placed in three distinct categories: wireless phones, wireless PDAs, and wireless laptops. Recently, however, hybrid products have been introduced that combine features from two or all three categories with the intent of providing enhanced capabilities to mobile users.

Mobile phones have been around the longest and have experienced the greatest changes since their inception. In the beginning, analog cellular phones were used exclusively for voice communications; next, digital phones were introduced, initially for voice communications but with added features (e.g., Call Display) and were later further enhanced with additional capabilities (e.g., Instant Messaging).

Wireless laptops include notebooks or portable PC browser clients that are wirelessly Web-enabled (e.g., IBM ThinkPad T20 connected with a GSM mobile phone through the infrared port). Although these devices are capable of supporting m-commerce activities, they do not represent the main point of access for such activities due to their relatively larger sizes and heavier weights compared to other mobile devices (Peck, 2001).

The most recent development in mobile devices was the introduction of "smart phones." These are mobile devices capable of tasks ranging from e-mail retrieval now to video and music streaming in the near future. Smart phones are a combination of cell phones and PDAs (e.g., Kyocera QCP™6035 Smart Phone, Samsung SPH -I300) (Pocket, 2001).