So far in this chapter, you've seen the structures that are part of a process and the API functions with which you (and the operating system) can manipulate processes. You've also found out how you can use tools to view how processes interact with your system. But how did those processes come into being, and how do they exit once they've fulfilled their purpose? In the following sections, you'll discover how a Win32 process comes to life.

The following list summarizes the main stages of creating a process with the Win32 CreateProcess function. The operations performed in each stage are described in detail in the subsequent sections.

Figure 6-5 shows an overview of the stages Windows 2000 follows to create a process. 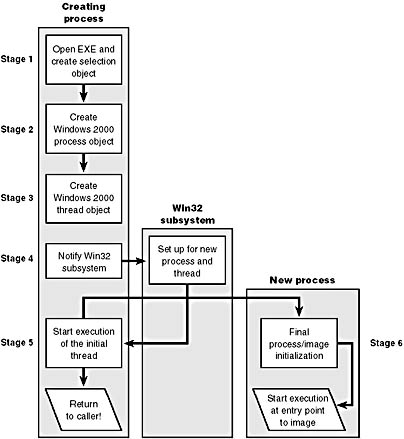 Before describing these stages in more detail, we should mention a few notes that pertain to all the stages.

Enough background. The steps of CreateProcess are described in detail in the following sections.

NOTE Many steps of CreateProcess are related to the setup of the process virtual address space and hence refer to many memory management terms and structures, which are defined in Chapter 7.

Stage 1: Opening the Image to Be Executed

As illustrated in Figure 6-6, the first stage in CreateProcess is to find the appropriate Win32 image that will run the executable file specified by the caller and to create a section object to later map it into the address space of the new process. If no image name is specified, the first token of the command line (defined to be the first part of the command-line string ending with a space or tab that is a valid file specification) is used as the image filename. 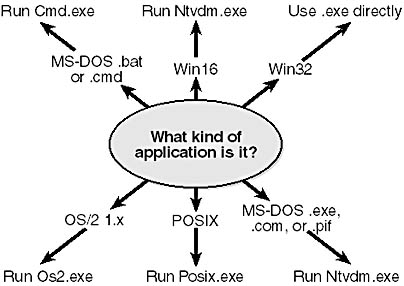 If the executable file specified is a Win32 .exe, it is used directly. If it's not a Win32 .exe (for example, if it's an MS-DOS, a Win16, a POSIX, or an OS/2 application), CreateProcess goes through a series of steps to find a Win32 support image to run it. This process is necessary because non-Win32 applications aren't run directly—Windows 2000 instead uses one of a few special support images that in turn are responsible for actually running the non-Win32 program. For example, if you attempt to run a POSIX application, CreateProcess identifies it as such and changes the image to be run on the Win32 executable file Posix.exe. If you attempt to run an MS-DOS or a Win16 executable, the image to be run becomes the Win32 executable Ntvdm.exe. In short, you can't directly create a process that is not a Win32 process. If Windows 2000 can't find a way to resolve the activated image as a Win32 process (as shown in Table 6-6), CreateProcess fails.

Specifically, the decision tree that CreateProcess goes through to run an image is as follows:

Now that CreateProcess has found a valid Win32 executable, it looks in the registry under HKLM\SOFTWARE\Microsoft\Windows NT\CurrentVersion\Image File Execution Options to see whether a subkey with the filename and extension of the executable image (but without the directory and path information—for example, Image.exe) exists there. If it does, CreateProcess looks for a value named Debugger for that key. If the value isn't null, the image to be run becomes the string in that value and CreateProcess restarts at Stage 1.

TIP You can take advantage of this CreateProcess behavior and debug the startup code of Windows 2000 service processes before they start rather than attach the debugger after starting the service, which doesn't allow you to debug the startup code. If you're feeling mischievous, you can also exploit this behavior to confuse people by causing another file to be run rather than the one they specified.

At this point, CreateProcess has opened a valid Win32 executable file and created a section object to map it into the new process address space. Next it creates a Windows 2000 executive process object to run the image by calling the internal system function NtCreateProcess. Creating the executive process object (which is done by the creating thread) involves the following substages:

Stage 2A: Setting Up the EPROCESS Block

To create these three pages, the following steps are taken:

The next stage of CreateProcess is the initialization of the KPROCESS block, which contains a pointer to a list of kernel threads. (The kernel has no knowledge of handles, so it bypasses the object table.) The kernel process block also points to the process's page table directory (used to keep track of the process's virtual address space), the total time the process's threads have executed, the process's default base-scheduling priority (which starts as Normal, or 8, unless the parent process was set to Idle or Below Normal, in which case the setting is inherited), the default processor affinity for the threads in the process, and the initial value of the process default quantum, which is taken from the value of PspForegroundQuantum[0], the first entry in the systemwide quantum array.

NOTE The default initial quantum differs between Windows 2000 Professional and Windows 2000 Server. For more information on thread quantums, turn to their discussion in the section "Thread Scheduling."

Stage 2D: Concluding the Setup of the Process Address Space

Setting up the address space for a new process is somewhat complicated, so let's look at what's involved one step at a time. To get the most out of this section, you should have some familiarity with the internals of the Windows 2000 memory manager, which are described in Chapter 7.

NOTE POSIX processes clone the address space of their parents, so they don't have to go through these steps to create a new address space. In the case of POSIX applications, the new process's section base address is set to that of its parent process and the parent's PEB is cloned for the new process.

Stage 2E: Setting Up the PEB

CreateProcess allocates a page for the PEB and initializes a number of fields, which are described in Table 6-7.

Table 6-7 Initial Values of the Fields of the PEB

If the image file specifies explicit Win32 version values, this information replaces the initial values shown in Table 6-7. The mapping from image version information fields to PEB fields is described in Table 6-8.

Stage 2F: Completing the Setup of the Executive Process Object

Before the handle to the new process can be returned, a few final setup steps must be completed:

Stage 3: Creating the Initial Thread and Its Stack and Context

At this point, the Windows 2000 executive process object is completely set up. It still has no thread, however, so it can't do anything yet. Before the thread can be created, it needs a stack and a context in which to run, so these are set up now. The stack size for the initial thread is taken from the image—there's no way to specify another size.

Now the initial thread can be created, which is done by calling NtCreateThread. (For a detailed description of how a thread is created, see the section "Flow of CreateThread.") The thread parameter (which can't be specified in CreateProcess but can be specified in CreateThread) is the address of the PEB. This parameter will be used by the initialization code that runs in the context of this new thread (as described in Stage 6). However, the thread won't do anything yet—it is created in a suspended state and isn't resumed until the process is completely initialized (as described in Stage 5).

Stage 4: Notifying the Win32 Subsystem About the New Process

After all the necessary executive process and thread objects have been created, Kernel32.dll sends a message to the Win32 subsystem so that it can set up for the new process and thread. The message includes the following information:

The Win32 subsystem performs the following steps when it receives this message:

At this point, the process environment has been determined, resources for its threads to use have been allocated, the process has a thread, and the Win32 subsystem knows about the new process. Unless the caller specified the CREATE_SUSPENDED flag, the initial thread is now resumed so that it can start running and perform the remainder of the process initialization work that occurs in the context of the new process (Stage 6).

Stage 6: Performing Process Initialization in the Context of the New Process