Each Windows 2000 process is represented by an executive process (EPROCESS) block. Besides containing many attributes relating to a process, an EPROCESS block contains and points to a number of other related data structures. For example, each process has one or more threads represented by executive thread (ETHREAD) blocks. (Thread data structures are explained in the section "Thread Internals" later in this chapter.) The EPROCESS block and its related data structures exist in system space, with the exception of the process environment block (PEB), which exists in the process address space (because it contains information that is modified by user-mode code).

In addition to the EPROCESS block, the Win32 subsystem process (Csrss) maintains a parallel structure for each Windows 2000 process that executes a Win32 program. Also, the kernel-mode part of the Win32 subsystem (Win32k.sys) has a per-process data structure that is created the first time a thread calls a Win32 USER or GDI function that is implemented in kernel mode.

Figure 6-1 is a simplified diagram of the process and thread data structures. Each data structure shown in the figure is described in detail in this chapter. 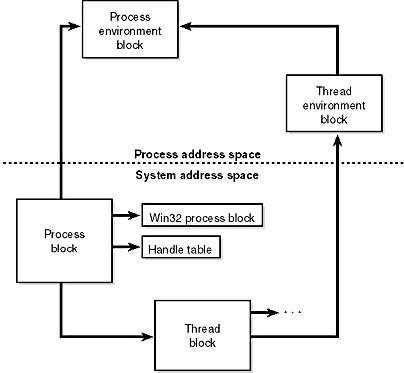 First let's focus on the process block. (We'll get to the thread block in the section "Thread Internals" later in the chapter.) Figure 6-2 shows the key fields in an EPROCESS block. 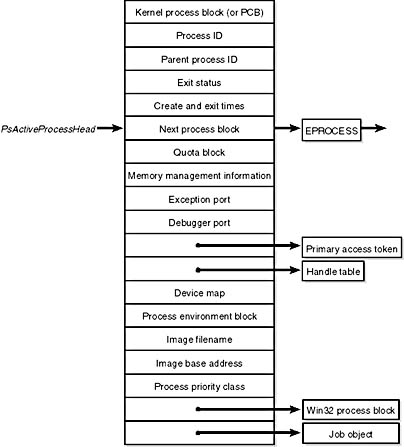 EXPERIMENT Displaying the Format of an EPROCESS Block

The !processfields command shows the format of a process block, not its contents. (The !process command actually dumps the contents of a process block. An annotated example of the output from this command is included later in this section.) Although some of the field names are self-explanatory, the output doesn't give the data type of the fields, nor does it show the format of the structures that are included within or pointed to by the EPROCESS block, such as the kernel process block (Pcb), quota block (QuotaBlock), and so on. By examining the offsets, however, you can at least tell the length of a field. (Hint: Fields that are 4 bytes long and refer to some other structure are likely pointers.)

You can also use the !strct command (in the secondary kernel debugger extension library Kdex2x86.dll) to display the format of a process block. This command displays every field and its data type (whereas the !processfields command displays only some of the fields and doesn't display data type information). A portion of the output follows:

Table 6-1 explains some of the fields in the preceding experiment in more detail and includes references to other places in the book where you can find more information about them. As we've said before and will no doubt say again, processes and threads are such an integral part of Windows 2000 that it's impossible to talk about them without referring to many other parts of the system. To keep the length of this chapter manageable, however, we've covered those related subjects (such as memory management, security, objects, and handles) elsewhere.

Table 6-1 Contents of the EPROCESS Block

The kernel process (KPROCESS) block, which is part of the EPROCESS block, and the process environment block (PEB), which is pointed to by the EPROCESS block, contain additional details about the process object. The KPROCESS block (which is sometimes called the PCB, or process control block) is illustrated in Figure 6-3. It contains the basic information that the Windows 2000 kernel needs to schedule threads. (Page directories are covered in Chapter 7, and kernel thread blocks are described in more detail later in this chapter.) 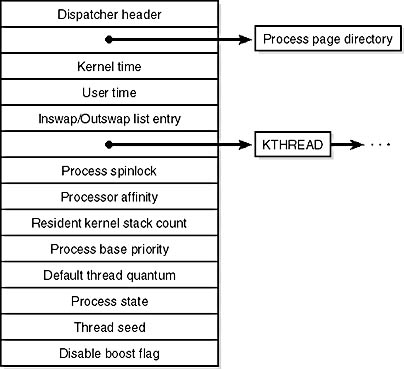 The PEB, which lives in the user process address space, contains information needed by the image loader, the heap manager, and other Win32 system DLLs that need to be writable from user mode. (The EPROCESS and KPROCESS blocks are accessible only from kernel mode.) The PEB is always mapped at address 0x7FFDF000. The basic structure of the PEB is illustrated in Figure 6-4 and is explained in more detail later in this chapter. 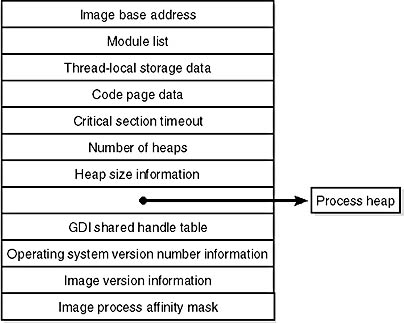 You can dump the PEB structure with the !peb command in the kernel debugger. The following example, which uses LiveKd, shows the PEB for the LiveKd process:

A few of the key kernel global variables that relate to processes are listed in Table 6-2. These variables are referred to later in the chapter, when the steps in creating a process are described.

Windows 2000 maintains a number of counters with which you can track the processes running on your system; you can retrieve these counters programmatically or view them with the Performance tool. Table 6-3 lists the performance counters relevant to processes (except for memory management and I/O-related counters, which are described in chapters 7 and 9, respectively).

For reference purposes, some of the Win32 functions that apply to processes are described in Table 6-4. For further information, consult the Win32 API documentation in the MSDN Library.

A number of tools for viewing (and modifying) processes and process information are available. These tools are included within Windows 2000 itself and within the Windows 2000 Support Tools, Windows 2000 debugging tools, Windows 2000 resource kits, the Platform SDK, and the DDK. The trouble is, you can't get all the information you need with one single tool. However, most information is available from more than one tool, but the data is sometimes identified by different names (and sometimes assigned different values) in each of the tools. To help you determine which tool to use to get the basic process information you need, consult Table 6-5. This table isn't a comprehensive list of all the information available about a process—for example, you'll find out what tools you can use to gather memory management information in Chapter 7—but if you need the basics, you'll find them here. 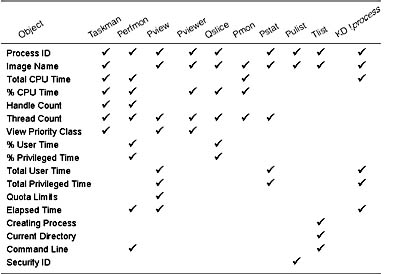 The following experiments illustrate the various views of process information you can obtain with some of these tools.

The built-in Windows 2000 Task Manager provides a quick list of the processes running on the system. You can start Task Manager in one of three ways: (1) press Ctrl+Shift+Esc, (2) right-click on the taskbar and select Task Manager, or (3) press Ctrl+Alt+Delete and click the Task Manager button. Once Task Manager has started, click the Processes tab to see the list of running processes. Notice that processes are identified by the name of the image of which they are an instance. Unlike some objects in Windows 2000, processes can't be given global names. To display additional details, choose Select Columns from the View menu and select additional columns to be added, as shown here: 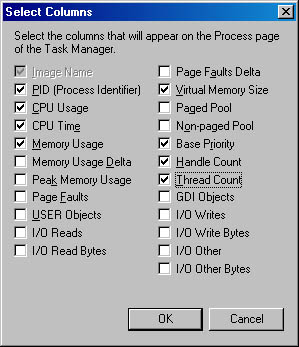 Although what you see in the Task Manager Processes tab is clearly a list of processes, what the Applications tab displays isn't as obvious. The Applications tab lists the top-level visible windows on all the desktops in the interactive window station. (By default, there are two desktop objects—you can create more by using the Win32 CreateDesktop function.) The Status column indicates whether or not the thread that owns the window is in a Windows message wait state. "Running" means the thread is waiting for windowing input; "Not Responding" means the thread isn't waiting for windowing input (for example, the thread might be running or waiting for I/O or some Win32 synchronization object). 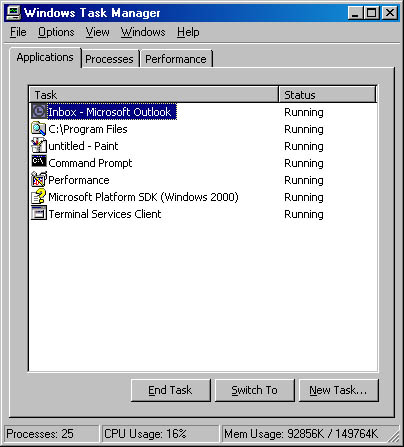 From the Applications tab, you can match a task to the process that owns the thread that owns the task window by right-clicking on the task name and choosing Go To Process.

One unique attribute about a process that most tools don't display is the parent or creator process ID. You can retrieve this value with the Performance tool (or programmatically) by querying the Creating Process ID. The Windows 2000 Support Tools command tlist /t uses the information in the attribute to display a process tree that shows the relationship of a process to its parent. Here's an example of output from tlist /t:

Tlist indents each process to show its parent/child relationship. Processes whose parents aren't alive are left-justified, because even if a grandparent process exists, there's no way to find that relationship. Windows 2000 maintains only the creator process ID, not a link back to the creator of the creator, and so forth.

To demonstrate the fact that Windows 2000 doesn't keep track of more than just the parent process ID, follow these steps:

QuickSlice gives a quick, dynamic view of the proportions of system and kernel time that each process currently running on your system is using. On line, the red part of the bar shows the amount of CPU time spent in kernel mode, and the blue part shows the user-mode time. (Although reproduced in the window below in black and white, the bars in the online display are always red and blue.) The total of all bars shown in the QuickSlice window should add up to 100 percent of CPU time. To run QuickSlice, click the Start button, choose Run, and enter Qslice.exe (assuming the Windows 2000 resource kit is in your path). For example, try running a graphics-intensive application such as Paint (Mspaint.exe). Open QuickSlice and Paint side by side, and draw squiggles in the Paint window. When you do so, you'll see Mspaint.exe running in the QuickSlice window, as shown here: 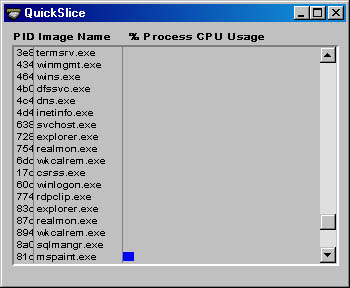 For additional information about the threads in a process, you can also double-click on a process (on either the process name or the colored bar). Here you can see the threads within the process and the relative CPU time each thread uses (not across the system):

The Process Viewer (Pviewer.exe) that comes with the Windows 2000 Support Tools permits you to view information about the running processes and threads as well as to kill processes and change process priority classes. You can use this tool to view processes both on the local computer and across the network on remote machines running Windows 2000. This tool is also available in the Platform SDK (where it's called Pview.exe.) The Process Viewer is well documented in the Windows 2000 Support Tools help file, but here's a quick overview of the options available to you. The basic display of the Process Viewer looks like this: 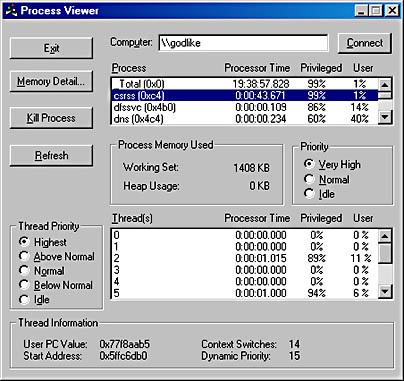 Here's what the various options do:

The !process command for the kernel debugger (described in Chapter 1) displays a subset of the information in an EPROCESS block. This output is arranged in two parts for each process. First you see the information about the process, as shown below. (Not all the fields in the output are labeled—only the parts germane to this experiment.) 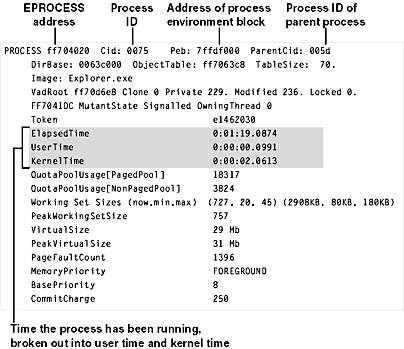 After the basic process output comes a list of the threads in the process. That output is explained in the experiment "Using the Kernel Debugger !thread Command.." Other commands that display process information include !handle, which dumps the process handle table (described in more detail in the section "Object Handles and the Process Handle Table" in Chapter 3). Process and thread security structures are described in Chapter 8.

Another command that dumps an EPROCESS block is the !strct command. See the experiment "Displaying the Format of an EPROCESS Block" for more information on this command.