Now that we've dissected processes, let's turn our attention to the structure of a thread. Unless explicitly stated otherwise, you can assume that anything in this section applies to both normal user-mode threads and kernel-mode system threads (described in Chapter 3).

At the operating system level, a Windows 2000 thread is represented by an executive thread (ETHREAD) block, which is illustrated in Figure 6-7. The ETHREAD block and the structures it points to exist in the system address space, with the exception of the thread environment block (TEB), which exists in the process address space. In addition, the Win32 subsystem process (Csrss) maintains a parallel structure for each thread created in a Win32 process. Also, for threads that have called a Win32 subsystem USER or GDI function, the kernel-mode portion of the Win32 subsystem (Win32k.sys) maintains a per-thread data structure (called the W32THREAD structure) that the ETHREAD block points to. 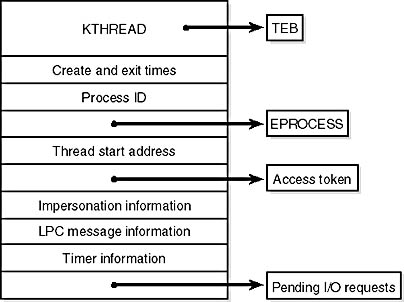 Fibers allow an application to schedule its own "threads" of execution rather than rely on the priority-based scheduling mechanism built into Windows 2000. Fibers are often called "lightweight" threads, and in terms of scheduling, they're invisible to the kernel because they're implemented in user mode in Kernel32.dll. To use fibers, a call is first made to the Win32 ConvertThreadToFiber function. This function converts the thread to a running fiber. Afterward, the newly converted fiber can create additional fibers with the CreateFiber function. (Each fiber can have its own set of fibers.) Unlike a thread, however, a fiber doesn't begin execution until it's manually selected through a call to the SwitchToFiber function. The new fiber runs until it exits or until it calls SwitchToFiber, again selecting another fiber to run. For more information, see the Platform SDK documentation on fiber functions.

For more details on the internal structure of an ETHREAD block, you can use the kernel debugger !threadfields or !kdex2x86.strct ethread command to display the offsets in hexadecimal for almost every field in the structure. Although many of the field names are self-explanatory, the output doesn't give the data type of the fields, nor does it show the format of the structures that are included within or pointed to by the ETHREAD block.

Let's take a closer look at two of the key thread data structures referred to above: the KTHREAD block and the TEB. The KTHREAD block contains the information that the Windows 2000 kernel needs to access to perform thread scheduling and synchronization on behalf of running threads. Its layout is illustrated in Figure 6-8. 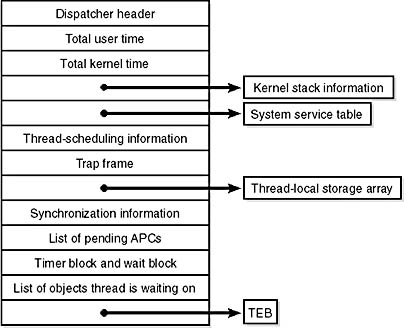 The key fields of the KTHREAD block are described briefly in Table 6-10.

Although you can use the kernel debugger command !threadfields to see information similar to that in the output of !processfields shown in the experiment below, you'll get more detailed output of the fields in ETHREAD and KTHREAD blocks if you use !ethread. The !ethread command is one of the commands provided in Kdex2x86.dll, the secondary kernel debugger extension DLL. To use these extension commands, you must first load this DLL as shown in the following output listing. The !ethread command takes the address of an ETHREAD block and displays both the KTHREAD and the ETHREAD blocks that follow. In the following example, we used !process to dump a process and find the address of the ETHREAD blocks for the threads in the process. The output looks like this:

The TEB, illustrated in Figure 6-9, is the only data structure explained in this section that exists in the process address space (as opposed to the system space). 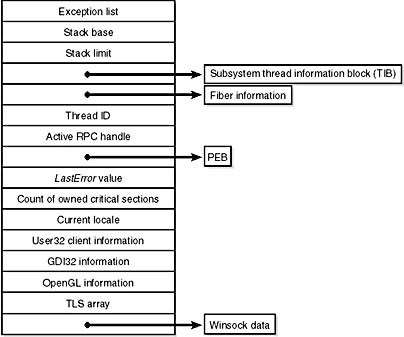 The TEB stores context information for the image loader and various Win32 DLLs. Because these components run in user mode, they need a data structure writable from user mode. That's why this structure exists in the process address space instead of in the system space, where it would be writable only from kernel mode. You can find the address of the TEB with the kernel debugger !thread command.

You can dump the TEB structure with the !teb command in the kernel debugger. The output looks like this:

Most of the key information in the thread data structures is exported as performance counters, which are listed in Table 6-12. You can extract much information about the internals of a thread just by using the Performance tool in Windows 2000.

Table 6-13 shows the Win32 functions for creating and manipulating threads. This table doesn't include functions that have to do with thread scheduling and priorities—those are included in the section "Thread Scheduling" later in this chapter.

Besides the Performance tool, several other tools expose various elements of the state of Windows 2000 threads. (The tools that show thread-scheduling information are listed in the section "Thread Scheduling.") These tools are itemized in Table 6-14.

Table 6-14 Thread-Related Tools and Their Functions 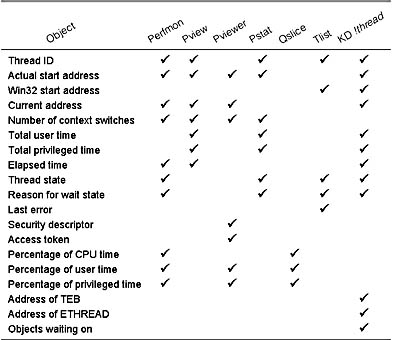 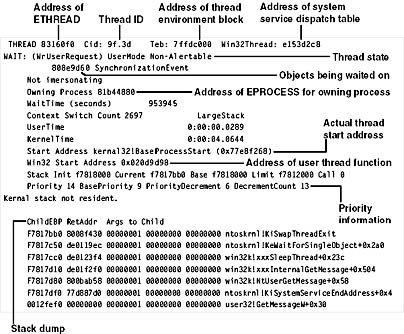