The Communication Manager and its associated media gateways are considered the equivalent of a traditional PBX. In small deployments, voicemail and messaging applications may be deployed co-resident in the Communication Manager enclosure. In larger deployments, they would be hosted in adjunct servers and not necessarily considered part of the PBX proper. In addition to core telephony components, Avaya and third-party partners offer many adjunct systems to interact with and provide value-added services to the core VoIP components (for example, management systems).

Core call processing functions are implemented by the Communication Manager, which provides user and system management functionality, intelligent call routing, application integration and extensibility, and enterprise communications networking. The Communication Manager runs on a media server and on the existing family of traditional DEFINITY servers. The media server can be a module in a media gateway, or it can be a separate appliance. The media server provides centralized, enterprise-class call processing.

This call processing can be distributed across a multiprotocol network (including IP) to support a network architecture consisting of headquarters, branch, remote, small, and home offices. The Communication Manager has embedded capabilities for

Avaya media servers are designated S8 nnn (for example, S8300) and control media gateways and communications devices (the IP phones). In the H.323 paradigm, the media servers are the gatekeepers. Avaya also supports SIP, but this configuration was not reviewed for the book.

Communication Manager runs on top of a customized version of Linux (Red Hat Enterprise Linux 4); it can also execute on the legacy DEFINITY servers that run over the proprietary Oryx/Pecos operating system. The legacy servers are installed into Avaya CMC1, SCC1, and MCC1 media gateways. The DEFINITY servers are being phased out of the Avaya product line in favor of media servers, however, so we did not review these legacy servers for the book. 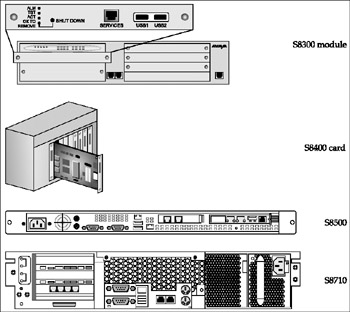 Media servers and media gateways may be housed in the same or separate platforms. In larger configurations, these components are separated. For smaller configurations, the media server and media gateway are housed in the same platform. For example, the S8300 Media Server can be installed in a G350 Media Gateway. Such a configuration might serve a small or medium- sized business or a branch office of an multisite VoIP deployment. In the latter case, the S8300 Media Server may be configured as a LSP (Local Survivability Processor) in the event connectivity with the remote primary call controller at a headquarters site is lost. Figure 8-2 illustrates the various media gateways. 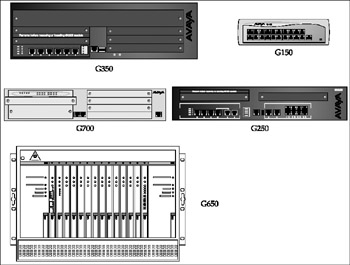 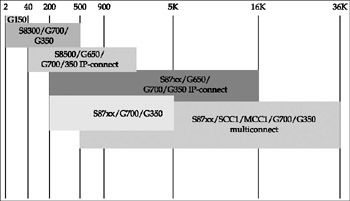 The Communication Manager provides support for the following devices: 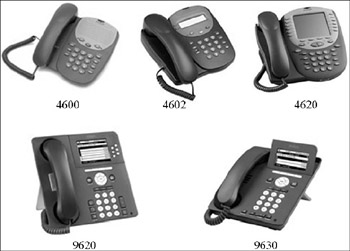 Avaya's primary signaling protocol is H.323. Avaya, of course, uses RTP for media/audio. Avaya also supports SIP, but this is much less common than H.323. Note, however, that Avaya embeds quite a bit of proprietary messaging within H.323 to support features they provided with their legacy handsets. 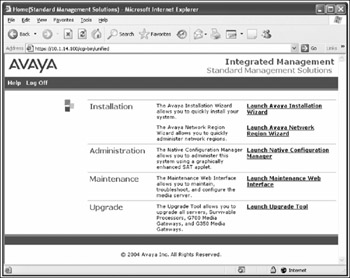 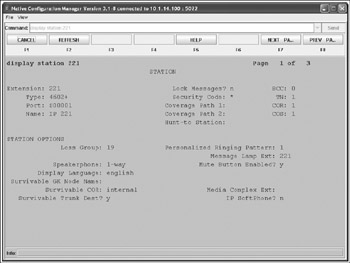 Avaya also provides several application programming interfaces (APIs) to interact with Communication Manager from other Avaya or third-party platforms. These APIs are listed because they provide a possible vector for attack:

To be sure, these represent a rich set of APIs for interaction with the Communication Manager. However, the more adjunct servers and APIs that are added to a telephony deployment and permitted to interact with the core telephony applications, the tougher it is to secure all of those adjunct servers and applications to prevent them from being used as a conduit to attack or to subvert core telephony operations. Figure 8-7 illustrates a Communication Manager system, along with several management consoles and adjunct systems using Avaya-provided APIs. 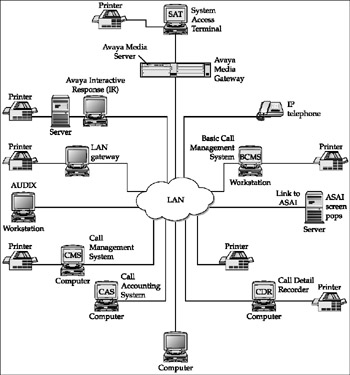 Avaya does not manufacture their own networking infrastructure. Avaya Communication Manager systems are compatible with popular switching infrastructure from vendors such as Cisco, Extreme, 3COM, Nortel, and so on. For information on network-based attacks, including those unique to Cisco equipment, see Chapters 4, 5, 6, and 7.