“Please provide your best proposal for equipment that will produce completely machined aluminum pistons, from permanent mold castings, ready for assembly into small gasoline engines at the rate of 360 per hour. The pistons are about the size of a large chickens egg and very delicate as well. The production tolerances on several features are in the .0002” area, some features are irregular in shape and some require super finishing. The device is to include automatic loading and unloading (i.e. no operator). This device is being competitively bid and must be in production in a western U.S. state in 13 months from the date of a purchase order.”

The above is greatly simplified, but is typical of a request for prospective special machine tool manufacturers to provide quotations to supply a unique process and its hardware for production of a client’s product. This example is expressed in lay terms.

Special Machine Tool: (author’s definition): Ideas and engineering manifested in cost and technologically effective processes and machines that make production of manufactured products first possible, then practical and then competitive. 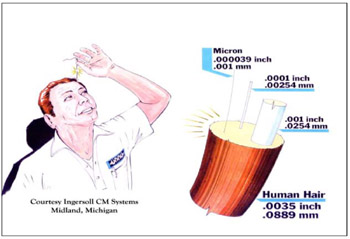 This is a request of a company, eventually assigned to an individual or individuals in that company, to invent something. Most of the time, it will be major machine tools and even entire manufacturing systems. It requires those people to compete, virtually head-to-head, with their counterparts among aggressive and clever competitors from around the world. It will be worth millions of dollars, apply the latest computer concepts with custom developed software, integrated with current and emerging mechanical technology. It will then be put into service on a very short schedule and must be supported in a location anywhere around the world.

A similar request is involved for any component to be produced in volume or those that would fall outside the capability of available standard devices. Equipment for machining of components for gasoline and diesel engines, transmissions, differentials, appliances, compressors, aircraft, and power generation equipment are very typical examples.

To clarify, special purpose machine tools are basically metal cutting machine tools that can incorporate other kinds of operations providing additional effectiveness in a manufacturing system.

The point of this exercise is to include a discussion about the American special machine tool industry. It’s an industry in which nearly every order is for a one of a kind product in a “take no prisoners” competitive environment. This mentality pushes the technology limits to offer the best value and win an order. Failure on a single order could be fatal for the enterprise and cause serious injury to the buyer. Success of that order, on the other hand, rewards both the buyer and seller. Eli Whitney would be like the kid in the candy store in this environment. The American special machine tool industry is little known to most Americans, but touches all of us in indirect ways.

In Europe and Japan, manufacturing and engineering are held in very high esteem. They are well-known and supported by industry, academia, banking, the government, their customers, and by the general public. In Germany, for example, it appears that the national psyche values industrial might or prowess on a par with financial might or other priorities, with both standard and special purpose machine tools in prominent positions. In the U.S., manufacturing industries such as machine tools and even automotive are no longer held in such high esteem and are sometimes considered to be part of a “rust belt.”

American auto companies have discussed having a manufacturing presence in Japan beyond just joint ventures and are expected to move in that direction. That move is thought to be important strategically because manufacturing is so highly regarded in the Japanese culture. Many special and standard machine tool companies, including the second largest in the world, Amada, are located in Japan. Until recently Amada was the largest, but has now been overtaken by Comau, which is headquartered in Italy.

In the 1940s and 50s, many people believed that the auto and aircraft industries were mature and that significant advances to be realized had already been achieved. People today believe that very significant advances remain in both; in fact, the technologies are even accelerating. Even the gasoline and diesel internal combustion engine technology is still advancing significantly.

Alternative power sources for automobiles are now beginning to appear. Global positioning systems are evolving rapidly and are already in popular use. Guidance and crash avoidance systems will follow. Automobiles are being fitted with wireless communications gear that can interface with the Internet and drive-by-wire technology is being introduced.

Many types of technology must come together in an automobile and in an airplane in just the right way for those products to succeed and advance as they do. That will continue to happen, even accelerate. Many of the technologies involved are unique to each of the two industries, while others are more universal technologies such as computer hardware and software, but are uniquely applied. Even in the universal technology area, developments have been driven by the auto and aircraft industries and then applied in others. These products are really marvels of technology and new, more advanced generations appear with amazing regularity year after year.

The special machine tool industry as we know it was in its infancy in the 1940s, but it parallels the auto and aircraft industries regarding the development and application of technology. Previously unheard of speed in the movement of massive machine elements through use of linear motors, new concepts in absolute structural rigidity, and specialized computer hardware and software are among its advances. It is also not unusual for the industry to force technology advance for its own use from supporting industries as the auto and aircraft industries do.

The industry is an enabling industry for other manufacturing industries such as autos, aircraft, appliances, and others. It fosters advances in those industries by the development of new processes, and imaginative application of new technology. Heretofore impossible new product capability becomes first possible and then practical. Examples include: the ultra high strength fiber lay-up process and equipment for aircraft wing and tail structures; linear motor use in high speed machining of irregularly shaped highly efficient gasoline and diesel engine pistons; and the high speed machining from solid aluminum of gigantic wing spars.

It is comparable to the development of computer hardware and software by one industry versus its use by others. The high tech and special machine tool industries are similar in that they are both among the highly competitive and innovative technology originating industries, which drive technology advance - enabling other industries.