Iterating Through a Container

You have a range of iteratorsmost likely from a standard containerand the standard algorithms don't fit your needs, so you need to iterate through them.

An iterator is a type that is used to refer to a single object in a container. The standard containers use iterators as the primary means for accessing the elements they contain. An iterator behaves like a pointer: you dereference an iterator (using the * or -> operators) to access what it refers to, and you can move an iterator forward and backward with syntax that looks like pointer arithmetic. An iterator is not exactly like a pointer, however, for a few reasons. Before I get into that though, let's cover the essentials of how to use iterators.

The ::iterator part of this declaration may look a little unusual if you are not used to working with the standard containers. It is a nested typedef on the list class template created for just this reasonso that users of the container can create iterators for this particular instantiation of a template. This is a standardized convention that all of the standard containers obey; for example, you can declare an iterator to a list or to a set like this:

To get back to the example, the iterator p is initialized with the first element in the sequence, which is returned by begin. To advance forward to the next element, use operator++. You can use preincrement (++p) or postincrement (p++), just as you would with a pointer to an array element, but preincrement doesn't create a temporary value to return each time, so it's more efficient and is the preferred approach. Postincrement (p++) has to create a temporary variable because it returns the value of p before the increment. However, it can't increment the value after it has returned, so it has to make a copy of the current value, increment the current value, then return the temporary value. Creating these temporary variables adds up after a while, so if you don't require postincrement behavior, use preincrement.

You will know when to stop advancing to the next element when you hit the end. Or, strictly speaking, when you hit one past the end. The convention with the standard containers is that there is a mystical value that represents one past the end of the sequence, and that value is returned by end. This works conveniently in a for loop, as in the example:

As soon as p equals end, you know that p can advance no further. If the container is empty, begin == end is true, so the body of the loop is never executed. (However, use the empty member function to test a container for emptiness, don't compare begin to end or check that size == 0).

That's the simple functional explanation of iterators, but that's not all. First, an iterator as declared a moment ago works as an rvalue or an lvalue, which means you can assign from its dereferenced value or assign to it. To overwrite every element in the string list, I could write something like this:

Since *p refers to an object of type string, string::operator=(const char*) is used to assign the new string to the element in the container. But what if lstStr is a const object? In that case, an iterator won't work because dereferencing it returns a non-const object. You will need to use a const_iterator, which is an iterator that returns an rvalue only. Imagine that you decide to write a simple function for printing the contents of a container. Naturally, you will want to pass the container as a const reference:

Using const in this situation is the right thing to do, and a const_iterator will make the compiler keep you honest if your code tries to modify *p.

But you may not be able to use a reverse_iterator, in which case, you can use an ordinary iterator, as in:

Finally, if you happen to know how far forward or backward you need to advance, you can use arithmetic with integral values to move more than one position forward or backward. Perhaps you want to get right to the middle of the list; you might do this:

But beware: depending on the type of container you are using, this operation may be constant or linear complexity. If you are using a container that stores elements contiguously, such as a vector or deque, the iterator can calculate where it needs to jump to and do it in constant time. But if you are using a node-based container, such as a list, you can't use these random-access operations. Instead, you have to advance until you find the element you're after. This is expensive. This is why your requirements for how you iterate through a container or how you plan to find elements in it will dictate the best container to use for your situation. (See Chapter 6 for more information on how the standard containers work.)

When using containers that allow random access, you should prefer iterators to using operator[] with an index variable to access each element. This is especially important if you are writing a generic algorithm as a function template because not all containers support random-access iterators.

There are other things you can do with an iterator, but not just any iterator. iterators belong to one of five categories that have varying degrees of functionality. It's not as simple as a class hierarchy though, so that's what I describe next.

Iterators supplied by different types of containers do not necessarily do all of the same things. For example, a vector::iterator lets you use operator+= to jump forward some number of elements, while a list::iterator does not. The difference between these two kinds of iterators is their category.

An iterator category is an interface conceptually (not technically; there is no use of abstract base classes to implement iterator categories). There are five categories, and each offers an increasing number of capabilities. They are, from least functional to most, as follows:

As the name implies, a bidirectional iterator goes forward and backward. It is a forward iterator that adds the ability to go backward using --p or p--.

A random-access iterator does everything a bidirectional iterator does, but it also supports pointer-like operations. You can use p[n] to access the element that is n positions after p in the sequence, or you can add to or subtract from p with +, +=, -, or -= to move the iterator forward some number of elements in constant time. You can also compare two iterators p1 and p2 with <, >, <=, or >= to determine their relative order (as long as they both point to the same sequence).

Or maybe you like to see things in Venn diagrams. In that case, see Figure 7-1. 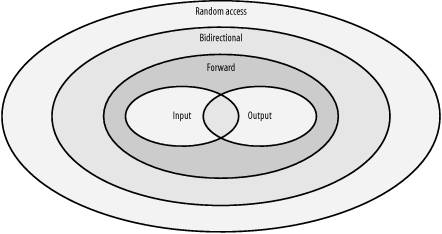 Most of the standard containers support at least bidirectional iterators, some (vector and deque) provide random-access iterators. The iterator category a container supports is specified in the standard.

Most of the time, you will use iterators for the simpler tasks: finding an element and erasing it, or otherwise doing something to it. For this you need only a forward iterator, which is available from all containers. But when you need to write a nontrivial algorithm, or use one from the standard library, you will often require more than a simple forward iterator. But how do you specify what you need? That's where iterator categories come in.

The different categories of iterators allow standard (or nonstandard) algorithms to specify the range of functionality they require. Generally, standard algorithms operate on ranges specified with iterators, and not entire containers. The declaration of a standard algorithm tells you what category of iterator it expects. For example, std::sort requires random-access iterators, since it needs to be able to reference nonadjacent elements in constant time. Thus, the declaration for sort looks like this:

By the name of the iterator type, you can see that it expects it to be a random-access iterator. If you try to compile sort on an iterator category other than random access, it will fail, because lesser iterator categories do not implement the pointer-arithmetic-like operations.

This recipe discussed iterators as they are used with containers. The iterator pattern is not specific to containers, and thus there are other kinds of iterators. There are stream iterators, stream buffer iterators, and raw storage iterators, but those are not covered here.