From a Web services perspective, the two pivotal .NET offerings will be:

The Microsoft BizTalk Server, scheduled for 2004, will also be important, particularly for e-business integration ”but not to the same extent as Windows Server 2003 and Visual Studio .NET 2003. BizTalk Server can best be thought of as an e-business-specific .NET server whose forte is that of software component integration (via adapters), enabling multivendor interoperability and software modularization to promote Web services such as component-based application development.

BizTalk Server promotes e-business application development and application integration, in the main, via the provision of BizTalk adapters and BizTalk vertical (market) accelerators. Third-party integration and interoperability are realized using these adapters. There are BizTalk adapters from Microsoft for interfacing with IBM s MQseries, as well as popular application suites from the likes of SAP, PeopleSoft, and J. D. Edwards. There is even a Web services adapter that enables applications to interact with others using XML-specific Web services methodology. There are also a slew of non-Microsoft adapters for interfacing with other application suites and technologies, such as those from Siebel, Oracle, Ariba, and i2.

The Windows Server 2003 family, which consists of the Standard Edition, Enterprise Edition, Datacenter Edition, Web Edition, and Small Business Server Edition, will, however, still be the primary platform on which .NET-based Web services will be deployed. This is only likely to change down the road, when Windows Server 200x, where x is most likely to be greater than 5, hits the market.

Windows 2003, referred to as WIN2003, is the latest incarnation of the Windows NT family of server OSs. Windows NT, where the NT stands for new technology, was introduced nearly a decade ago. It was a big step for Microsoft. At that time Novell, with NetWare, dominated the LAN-centric PC server market. NT was good but never stellar . IT professionals at enterprises always agonized about its scalability and reliability. When these servers, as highly popular platforms for Web servers and e-mail servers, became exposed to the Web, security became the other overriding concern.

Though NT was never big when it came to data center “type IT applications, it was effective for small business and departmental-level server applications. This segment accounts for a large chunk of the overall server market. Suffice to say, Windows NT, last seen as NT 4.0 with Service Pack 6a, has been a phenomenal success, despite its known shortcomings ”with the legendary blue screen of death, so well known that it even gets mentioned by late-night TV comedians. Its biggest claim to fame was that it managed to successfully and conclusively usurp NetWare.

With Windows 2000, Microsoft tried to address some of the reliability, security, and scalability issues that still lingered with NT 4.0. Windows 2000, if nothing else, was significantly more reliable and resilient. As of June 2003, there was WIN2003. According to Microsoft, Windows 2003 takes the best of Windows 2000 and makes it better ” specifically in the areas of scalability, security, performance, and ease of use. Microsoft s performance claims when it comes to WIN2003 indeed appear to be true. Third-party tests appear to indicate that file server functionality, on average, is roughly 20% quicker, whereas the new IIS 6.0-based Web serving, in general, appears to be at least 10% faster.

This improvement in performance is indeed good news vis--vis Web services, given that overall performance is one of the main issues at hand when considering a server platform for Web services that will be used by high-volume, mission-critical applications. In addition to software rewrites to improve the performance of core functions, WIN2003 addresses performance and scalability in two other ways:

The Windows Server 2003, Datacenter Edition, is capable of supporting 64-way processor partitions, each with up to 512 GB of RAM with the 64-bit version. The 32-bit version will support up to 32 processors and a maximum RAM size of 64 GB. This level of SMP capability, which is now similar to what is available on UNIX server platforms, provides horizontal scalability. Clustering, on the other hand, delivers vertical scalability, as well as failover protection. The Datacenter Edition will support up to 8-node clustering replete with dynamic load balancing and failover protection. Thus, it is fair to state that WIN2003 has also made a concerted effort to address the hitherto perennial scalability concerns. This is also encouraging in the context of Windows-based Web services for mission-critical applications.

Given the spate of widely publicized and credibility sapping security attacks on Windows platforms in the 2000 “2002 time frame, it is not surprising that Microsoft devoted considerable efforts trying to make WIN2003 above reproach in this area. The jury, however, is still out on this, since WIN2003 is still very new and as yet to be deployed in volume. Nonetheless, WIN2003 is supposed to be the first Microsoft server that attempts to conform to Microsoft s avowed Trustworthy Computing initiative. It is said to meet the three sacrosanct Ds of the Trustworthy Computing initiative, namely:

In terms of expanded security capabilities, WIN2003 includes a built-in firewall, integrated public-key infrastructure (PKI) management for digital certificates, Network Address Translation (NAT) support for even more secure Virtual Private Network (VPN) operation, and enhanced encryption support. However, the most noticeable security overlay with WIN2003 comes in the form of disabled and locked-down services. Many of the attacks on Windows servers over the Internet were realized by hackers exploiting services on the server that IT professionals did not even know were active ”let alone vulnerable.

To prevent this, more than 20 services (e.g., Telnet, WebClient, license logging, NetMeeting remote desktop sharing, and so forth) are turned off, by default, when WIN2003 is first installed. Neither is IIS 6.0, the latest version of the popular Web server, automatically installed each time a WIN2003 is deployed. Instead, IIS 6.0 has to be explicitly installed and activated. Even then, it starts up in a locked-down mode with many value-added capabilities ”for example, the ability to run scripts embedded in Web pages ”turned off. The bottom line is that compared with its predecessors, WIN2003 at least sets out to be security conscious from the get-go. This is obviously good news, but IT professionals are unlikely to drop their guard until WIN2003, in large numbers , has been successfully running around the world for at least 2 years .

Whereas WIN2003 is the .NET-specific back end when it comes to Web services, Visual Studio .NET 2003, incontrovertibly, is the front end ”as clearly demonstrated by Microsoft in Figure 3.10. Microsoft claims that by the spring of 2003, there were more than a million developers using Visual Studio .NET! That is plausible. As unequivocally stated at the beginning of this chapter, Microsoft s visual development technology, now epitomized by Visual Studio .NET 2003, is the choice of the masses when it comes to cottage industry application development ”hence why it is ludicrous to think that Microsoft platforms will not play a pivotal role when it comes to the future of Web services. When you have a user base this large, it really is somewhat immaterial to harp on the idea that a Java IDE might allow you to build a comparable Web service with three fewer steps. That is really akin to telling the CTO of an enterprise with 5,000 Windows clients , all of them using Office and Outlook on a daily basis, that Linux is a more resilient OS.

In general, based on current PC technology, the system requirements for Visual Studio .NET 2003, as shown in Figure 3.13, are not overtly onerous. One could even say that they are somewhat reasonable, given the multilanguage support inherent with this product. It should also be noted that Visual Studio .NET 2003 includes built-in support for developing applications for mobile devices. The bottom line here is that for the foreseeable future, Visual Studio .NET 2003 and its successors will be the premier software development tool, within the Microsoft world, when it comes to XML Web services and new Web applications. 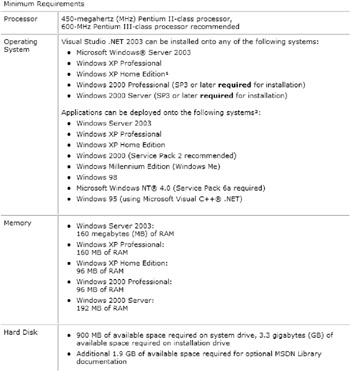