Wait! Don't stop reading because you're a C++ developer! Visual Basic is a powerful tool for developing applications, particularly in the user interface (UI) tier. Visual Basic is one of the most common programming environments in which ActiveX controls appear. In fact, you'll find many more Visual Basic developers than C++ developers—and they all have checkbooks. So it makes sense to learn how they perceive the world and develop software, especially if you want them to use your controls. Let's take a look at how ActiveX controls intermingle with Visual Basic.

The Nature of Visual Basic

Many C++ developers find that Visual Basic is a handy front-end tool. This viewpoint is certainly justifiable. If you're used to developing Microsoft Windows applications using C++, you'll probably find developing Visual Basic applications much simpler, mainly because Visual Basic takes care of most underlying details for you. When you develop in Visual Basic, you can say goodbye to complex message handlers, messy memory allocation routines, and so forth. However, you do lose some of the flexibility you get with C++.

When developing applications using Visual Basic, you might find yourself spending much of your time editing a form. A form is basically a window containing UI components. Developing the application involves placing various UI components on the form and writing handlers for the events generated by the controls. Perhaps this definition is a bit oversimplified, but hey—we're C++ programmers. Of course, this sort of development is similar to normal Windows development, except that Visual Basic hides all the grunge.

Because you're familiar with managing dialog boxes using the resource editor in Visual C++, you already know how to work with a Visual Basic form; arranging controls on a Visual Basic form is like working with the Visual C++ resource manager. You get a blank form and Visual Basic's toolbox, which provides all the standard controls (list boxes, group boxes, combo boxes, and so on). In addition to the standard controls, you can use ActiveX controls in your project.

Including ActiveX Controls in Your Project 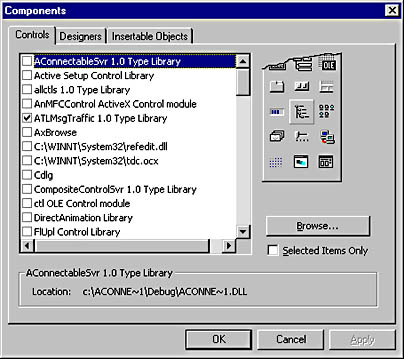 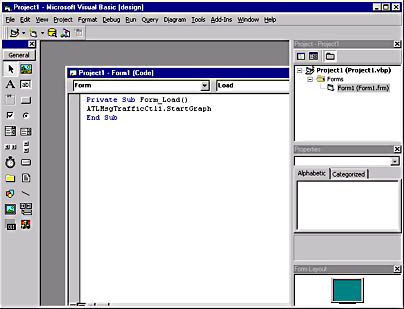 Figure 13-2. A new control in the Visual Basic toolbox.

If, for example, you drag the ATLMsgTraffic control onto a form, Visual Basic draws the form as shown in Figure 13-3 and creates an instance of the control named ATLMsgTrafficCtl1. (You can change the name of this control by editing its properties in the Properties window.) 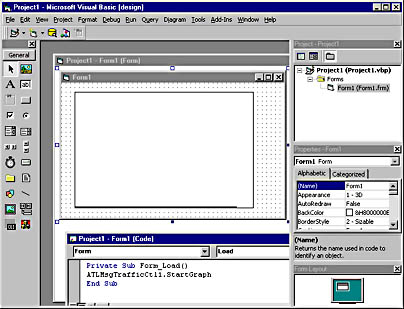 Figure 13-3. The ATLMsgTraffic control as it appears in a Visual Basic form.

If your control doesn't implement IPersistStreamInit, Visual Basic tries to use the IPersistPropertyBag interface to store the properties in the form itself, as shown in this Visual Basic code:

In addition to managing the properties through the Properties window at design time, you can also manipulate the properties programmatically at run time. For example, if you want to set the timing interval for the ATLMsgTraffic control programmatically, you can use the following code snippet. This code assumes that the form contains a button named SetInterval and an edit control named Interval. It takes the value of the data that the user types into the edit box and changes the control's interval property accordingly.

As you've already seen, an ActiveX control is just a COM class that implements a number of interfaces. ActiveX controls use the entire OLE Embedding protocol. It's fairly complex—the container and the control exchange a ton of interfaces, such as IOleObject, IOleControl, IDataObject, and IOleControlSite. When a container creates a control, the only information the container has is the properties and methods supported by the control.

The last Visual Basic topic we need to cover is how to hook up event handlers for the controls. Remember that the ATLMsgTraffic control defines a default event set that fires two events: ExceededThreshold and NewInterval. When Visual Basic read the type information about the control, it also retrieved all the information necessary for implementing the event interface. When you select the ATLMsgTrafficCtl1 object on the form (using the combo box in the upper left-hand corner of the form editor), the combo box in the right-hand corner lists the events generated by the control. Each time you select an event from the combo box in the right-hand corner of the form editor, Visual Basic inserts a stub for the event handler. Visual Basic hooks up to the control using connection points. (See Chapter 12 for more information about connection points.) Of course, you never actually see this process. The following code shows a Visual Basic application responding to events generated by the ATLMsgTraffic control by placing strings in a list box named NormalEvents.