The easiest way to add a control to your project is to use Component Gallery. Select Project_Add To Project_Components And Controls from the Visual C++ menu. This opens the Components And Controls Gallery dialog box, which asks if you want to insert standard Visual C++ components or registered ActiveX controls. When you select registered ActiveX controls, Visual C++ searches the Registry for all relevant controls, just as Visual Basic does. When you select a control from the list, Visual C++ uses the control's type library to build a C++ wrapper class around the control. The wrapper class handles all the details of activating the control, including CoCreateInstance, and of exchanging all the control and container interfaces. Visual C++ also takes the bitmap representing the control and places it in the resource editor control palette along with the other basic controls. (This, too, is similar to how Visual Basic works.)

You can then use ClassWizard to add a data member to a dialog box that represents the control. Visual C++ makes this easy—it's just like connecting a member variable to a normal Windows control.

When Visual C++ reads the control's type library, Visual C++ retrieves all the information needed to write a wrapper class around your control. The following code shows the wrapper that Component Gallery produces for the ATLMsgTraffic control:

You should keep the following points about this class in mind:

Visual C++ then sizes and positions the control using the coordinates listed in the dialog template.

Once the control is loaded and in place, you can start calling methods on the object. For example, if you want the graph to start as soon as the dialog box appears, you might add a call to the control's StartGraph function as part of the WM_INITDIALOG processing, as shown in the following code: 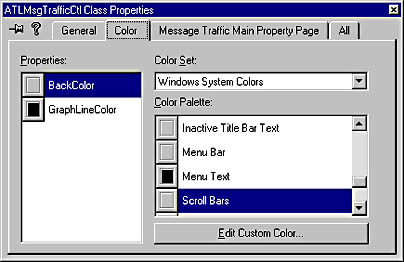 When a control is running within an MFC-based application, MFC holds on to several ambient properties. As an ActiveX control host, MFC supports autoclipping, message reflection, and mnemonics, so MFC returns TRUE for the following ambient property dispatch IDs (DISPIDs):

When we loaded the ATLMsgTraffic control, Component Gallery read the type library. In addition to building the C++ class wrapper, Component Gallery absorbed information about the control's event set. So when you add the control to a dialog box, you can add event handlers. MFC sets up the code so that when the control calls back to the dialog box, the control events can be handled the same way that window messages are handled—even though the events are function calls from the control to the client. Just fire up the ClassWizard and let it add the event handlers for you. Figure 13-5 illustrates this. 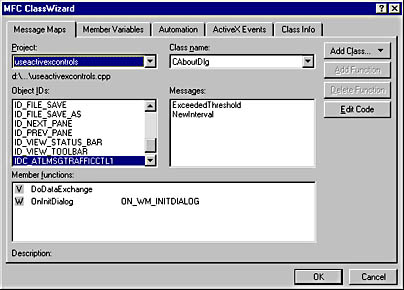