Bring Out The GIMP

The GIMP is an extremely powerful image editor that offers the kind of functions usually associated with top-end software like Adobe Photoshop. Although it's not aimed at beginners, it is possible for those new to image editing to get the most from of it, provided they put in a little work.

The program relies on a few unusual concepts within its interface, which can catch many people off guard. The first of these is that each of the windows within the program, such as floating dialog boxes or palettes, gets its own taskbar entry. In other words, The GIMP's icon bar, image window, settings window, and so on have their own buttons on the Taskbar alongside your other programs, as if they were separate programs.

Because of the way that The Gimp runs, before you start up the program, it's a wise idea to switch to a different virtual desktop (virtual desktops are discussed in Chapter 7), which you can then dedicate entirely to The GIMP. You should also turn off the Show Windows from All Desktops feature of the Taskbar, which will limit The GIMP's Taskbar buttons to its own desktop. To do this, right-click a blank part of the Taskbar, select Configure Panel, click the Taskbar icon on the left, and remove the tick from the relevant box.

Then you can switch to your separate virtual desktop and select K menu ® Graphics ® Image Editing to run The Gimp. When the program starts for the first time, it will run through its setup routine. Usually, you can use the default answers to the various questions asked by the wizard.

After program has setup,, you'll be greeted by what appears to be a complex assortment of program windows. Now you need to be aware of a second unusual aspect of the program: its reliance on right-clicking. Whereas right-clicking usually brings up a context menu offering a handful of options, within The GIMP, it's the principle way of accessing the program's functions. Right-clicking an image brings up a menu offering access to virtually everything you'll need while editing. SUSE Linux 9.1 includes the latest version of The GIMP, 2.0, and this includes a menu bar in the main image-editing window. This is considered sacrilege by many traditional The GIMP users, although it's undoubtedly useful for beginners. However, the right-click menu remains the most efficient way of accessing The GIMP's tools.

The main toolbar window, shown in Figure 21-1, is on the left. This can be considered the heart of The GIMP because, when you close it, all the other program windows are closed, too. The menu bar on the toolbar window offers most of the options you're likely to use to start out with The GIMP. For example, File ® Open will open a browser dialog box in which you can select files to open in The GIMP. It's even possible to create new artwork from scratch by choosing File ® New, although you should be aware that The GIMP is primarily a photo editor. To create original artwork, a better choice is a program like OpenOffice.org Draw. 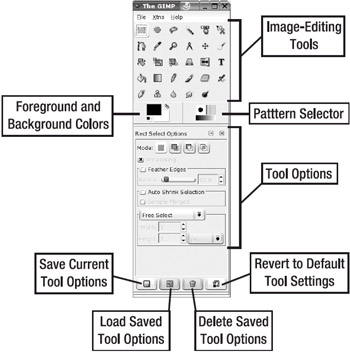 Beneath the menu bar in the main toolbar window are the tools for working with images. Their functions are described in Table 21-1, which lists the tools in order from left to right, starting at the top left.

Directly beneath the image-editing tool icons, on the right, is an icon that shows the foreground and background colors that will be used when drawing with tools such as the Brush. To define a new color, double-click either the foreground (top) or background (bottom) color box. To the left is the pattern selector, which lets you choose which patterns are used with tools such as the Brush.

Beneath these icons, you'll see the various options for the selected tool. By using the buttons at the bottom of the window, you can save the current tool options, load tool options, and delete a previously saved set of tool options. Clicking the button on the bottom right lets you revert to the default settings for the tool currently being used (useful if you tweak too many settings!).

Next to the toolbar window is the Layers dialog box. This can be closed for the moment, although you can make it visible again later, if you wish.