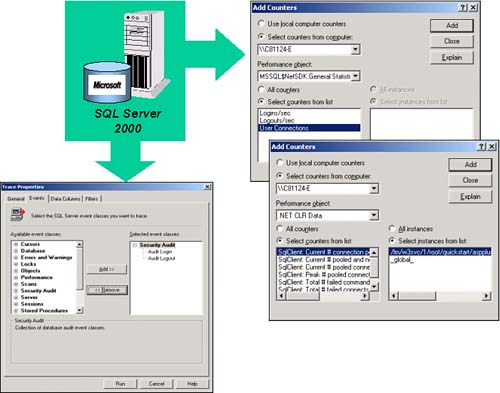 In addition, you can also use the trace properties of Profiler for basically the same type of information by selecting the Security Audit event classes. We will see more on this later in this hour .


In the following Visual Basic code sample (17conpool.vb), a series of connection strings are defined and used to establish connection pools for subsequent processing (Pool A and Pool B). In addition, several separate SQLConnection s will be made that will take advantage of the connection pools being established. This code was designed to require input from the console at certain points of its execution so that you can see the results of the performance counters along the way. Listing 17.1 provides the code.

To execute this code, you must first compile it from a DOS command prompt. Change directories to the location of the VB source code that contains this example (17conpool.vb). Then just compile the code as follows :

After the code has compiled successfully, you will need to make sure that you have Microsoft SQL Server up and running and the Northwind database has been installed (usually by default). To execute this sample, just specify the sample name at the DOS command prompt and press Enter. Again, this VB program will be prompting you to press Enter at certain points so that you can go look at the performance and user connection information as it is executing. Figure 17.3 shows the actual execution of this sample VB program. You should be able to get the same results. 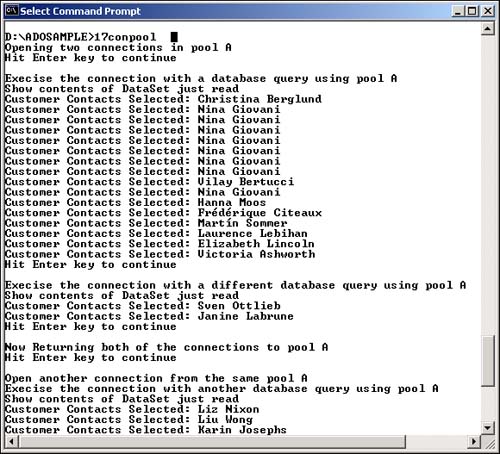 After you have executed this sample once, open the Performance Monitor console and choose to add (Plus +) the following counters to the monitor console:

For the ".NET CLR Data" performance objects, be sure to indicate the instance selection when adding these (the "17conpool" instance entry). These are all the connection pools being generated by this process. 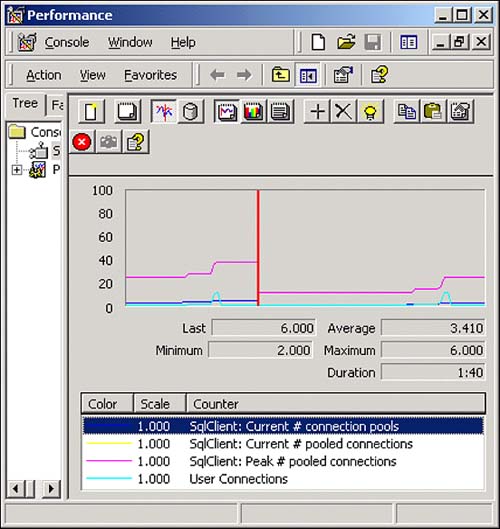