Where Do Ideas Come From?

Great ideas come from everywhere and nowhere. They spring up at any time of day or night, while you're driving, bathing, running a marathon, sleeping, or blundering about. They're impossible to predict or corral, and if you're not paying attention, they slip right past you.

One key to coming up with and retaining great ideas is to carry around a notepad and pen or a PDA. Keep it with you at all times so you can jot down your ideas at moment's notice, whether it's that burst of inspiration that strikes you in shower or the slow trickle that seeps into your consciousness in the middle of the night. If you're driving, a voice recording device is preferable. Having one in your car at all times is critical because the most brilliant ideas are ephemeral and will vanish before they're fully formed, unless you leap onto them, drag them out, and put them down in a coherent form.

Turn yourself into an idea fountain. For the next five days, write down every idea that pops into your head - no matter how half-baked it seems. See how they evolve. Keep track of the rate at which ideas come on a day-by-day basis.

You may be surprised. Once you train yourself in the art of continual brainstorming, the idea flow will increase at a dramatic rate. It's like exercise. If you use the creative muscle, it becomes stronger. And if you want to design breakthrough games, you have to think of yourself as an Olympic contender.

You should notice that after a month of training the flow of ideas is significantly higher than on day one-that is, if you don't get lazy. Remember, generating truly innovative ideas is hard work and requires dedication, but the payoff is enormous. If you stick with the program of continual brainstorming, you'll quickly discover that you've amassed more ideas than you know what to do with. This is a problem everyone should have. But it's not an easy one to solve.

We've noticed that as ideas come forth at an ever increasing rate, many people become overwhelmed and begin to shut down. They simplycan't handle their own output, and they start feeling as if they're drowning in their own creativity. The problem here isn't with the number of ideas; it's that the ideas aren't being organized in a way that gives them value. If you have a thousand scattered ideas and no way of effectively sorting through them and determining which are relevant to your current goals, then what use are they?

A good solution to this problem lies in creating a system for storing, categorizing, and manipulating your idea pool as it grows. It is only through a systematic approach of classifying and archiving your ideas that you will be able to effectively harness your creativity. One way to do this is to learn how to use a database program. There are many simple databases on the market, some as cheap as $30. Buy one and learn to use it. This will become an extension of your brain and allow you to take the massive flow of material and give it structure.

Write down 25 different categories of ideas. You can have subcategories if you like. For instance 'games' could be one category, and subcategories may include puzzle, strategy, role-playing, etc. Remember not to focus too heavily on games. Many of your best ideas will be cross-pollinations of ideas having to do with philosophy, books, performance, relationships, religion, etc. Now take the ideas you wrote down in the previous exercise and organize them by type.

This is what we call an 'ideabase.' It's a crossreference database of concepts that you've come up with. Every night (remember you're an Olympic athlete in training), you should transcribe your ideas from paper, PDA, or voice recording into the database. You should make a system for categorizing your ideas according to the types defined in the previous exercise. Naturally, you will perfect this system over time.

Forcing yourself to transcribe your ideas accomplishes two things. First, it cements the idea in your memory for later retrieval, and second, it gives you a chance to discard the lousy ideas. This is the first step in editing. But don't become too stringent. If an idea has any potential at all, then you should keep it. The beauty of this system is that you are building a powerful creative tool that can be drawn upon for the rest of your life. An idea that seems worthless now may have value ten years from now, and the more you put into your ideabase, the more effective it becomes.

Begin creating and organizing your ideabase. It should include at least 100 ideas and 30 categories. These can be drawn from the previous two exercises.

If you've structured your ideabase correctly, you should be able to search on key ideas and see what comes up. Imagine three years from now searching under the key word 'baboons' to see what emerges. It may surprise you. You may have written down notes about a character you were thinking of creating, a painting you saw in an art gallery, a dream you had, and odd behavior you noticed. All of this can be used as building blocks for an element in one of your games. In this way, your ideabase can be used to enhance your brainstorming sessions by providing direct links to your creative past. 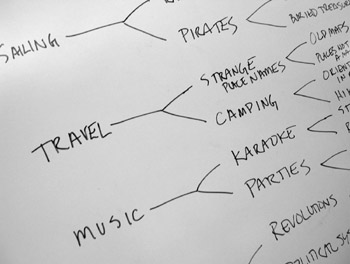