Staying aware of what's happening on your machine is a big part of system administration. The two most important things to watch on a day-to-day basis are (1) disk space and (2) load on the processor(s). Run out of disk space, and many processes stop working because they have no place to create temporary data. Let a runaway program consume too much processor time, and everything else slows down.

Anticipating the need to add disk space before you run out is an important system-administration function.

You can view both available and used space for the entire system or for any directory in the file system.

To see a summary of disk usage for the entire system:


To see disk usage for a particular directory:


Monitoring processes and load on your machine

If you have read Chapter 2, "Using the Command Line," then you already have seen two of the best tools for monitoring running processes: ps and top . (See "About Commands, Processes, and Jobs," in Chapter 2.)

Reading the man pages for ps and top yields a great deal of information about the kinds of things you can monitor on your system. Here are some highlights for the top command, which shows a wealth of information in real time. You might want to compare what we show here with the various views of system activity in the Activity Monitor application, which we mentioned earlier. For example, in Activity Monitor you may limit the display of active processes to ones associated with windows in the Aqua interface ("Windowed Processes").

Figure 11.24 is an annotated example of output from top , showing the most significant indicators of system use.

Figure 11.24. Annotated example of output from the top command. 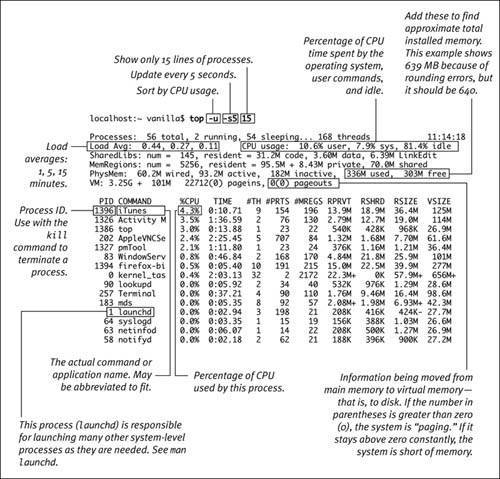 Note how the ID of each process is displayed. If a process gets out of control, you can use the kill command (described in Chapter 2) to terminate it. You need to use sudo to kill processes you didn't start yourself. Be very careful, since you could crash the machine by killing a system process, such as the process 1 ( launchd ).

If you use top frequently, you will notice that your system spends a great deal of time doing very little. It is quite common for computers, especially desktop machines used by only a few people, to run at 90 percent idle. Most of the computing power in the world is wasted , just generating heat and performing no useful work. For ways to put those spare CPU cycles to work for a good cause, see Seti@home (http://setiathome.ssl.berkeley.edu), distributed.net (www.distributed.net), and Xgrid (www.apple.com/server/macosx/features/ xgrid .html).

Another noteworthy command is uptime , which shows the same thing as the first line of output from the w command. The top command also displays the information from uptime in its first few lines, as well as a great deal of other information.

To see system load and uptime: