The number of IP devices supported by an Asterisk system depends heavily on the processing power of the selected platform and the functions being performed. A "small" deployment of up to 10 phones, or a "medium" deployment of up to 50 phones, can be supported with one high-end PC/server. The actual performance will vary based on the functions being provided. Because Asterisk uses the PC/server CPU for audio processing functions, which are normally provided by special purpose Digital Signal Processors (DSPs) in other systems, certain functions, such as conferencing, IVR, and so on, may place a high load on the system and reduce the number of supported users.

Larger deployments can be supported by clustering multiple servers together. According to the Asterisk documentation, this has been done and is possible, but requires quite a bit of expertise.

As suggested in Asterisk: The Future of Telephony , by Jim Van Meggelen, Jared Smith, and Leif Madsen, an Asterisk PBX may be deployed as a gateway to an existing legacy PBX as a means of gently introducing VoIP to an existing traditional telephony installation. As illustrated in Figure 9-1, the Asterisk PBX forwards calls to and from legacy PBX-controlled phones and the PSTN. The Asterisk PBX can permit newly deployed IP phones to call legacy PBX-controlled phones and vice versa. It can also be used to connect calls to remote offices. The figure also indicates that an Asterisk PBX can be added as an application peripheral (voicemail) and interact with a database/web/application server. 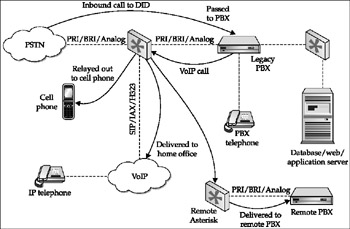 Figure 9-1: Asterisk as a PBX gateway