This section covers discovery, scanning, and enumeration steps you can take to locate and identify Asterisk components . 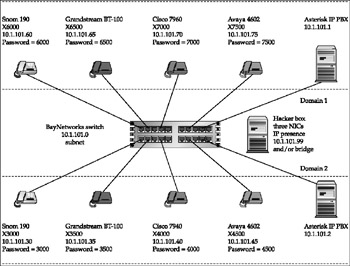 Asterisk v1.2.10 was released on July 15, 2006. Asterisk subreleased over a six-month time interval subsequent to release v1.2.1 in December 2005; now they average approximately one and a half releases per month. For example, v1.2.9 was released in June 2006. The main purpose of that subrelease was to fix a denial of service (DoS) security vulnerability in the IAX2 channel (an Inter-Asterisk Exchange peering channel). According to the Asterisk ChangeLog:

The point here is that Asterisk is still undergoing rather rapid development. In keeping with the traditions of open-source software, the pace of development (both of features and bug fixes) tends to be more dynamic, but also more open , than traditional closed-source software. The results from the scans performed for this book will likely change with future versions of Asterisk.

Each of the SIP phones used was provisioned with a static IP address in the 10.1.101. x subnet. They were also statically provisioned with the IP address of their SIP registrar and SIP proxy. The Asterisk IP PBX implements both the SIP registrar and SIP proxy roles, so the addresses programmed into each phone were the same: 10.1.101.2. Unless otherwise noted, we did all our testing on the 10.1.101.2 system because it was more robust and was built from scratch to run the Asterisk software. We provide some extra information here to describe how we set up our Asterisk system for testing, in case you would like to do the same.

From the Asterisk console, executing the command database show produced the following output:

The output identifies the four IP phones registered with and served by the Domain 2 Asterisk IP PBX, shown in Figure 9-2. Note the phone at x3000 is a Snom 190 IP phone. When it registers, it stipulates its SIP signaling port is 2051 instead of the default 5060. It also requires the SIP proxy server to include a "line" attribute (in other words, xuahyhk7 ).

The following is a fragment from the Asterisk IP PBX's extensions.conf file. The extensions.conf file is the dialplan for the IP PBX; however, several other .conf files come into play. The fragment is a very simplistic dialplan. It is too rudimentary for an enterprise, but sufficed for our purposes:

When you see the label on a line by itself surrounded by square brackets, it is called an Asterisk context . All subsequent lines are part of that context until a new context definition is encountered . You can see there is a [default] context that includes the [internal] context and nothing else. In our case, the [default] context is simply an alias for the [internal] context. There are a handful of reserved context names that have special meaning to Asterisk. Most other context names are arbitrarily defined by the dialplan's author. The [default] and [internal] contexts have special meaning. Although the names of the other three contexts defined in our dialplan ( local , outbound , from-10.1.101.1 ) have descriptive meaning to us, they are not reserved Asterisk context labels.

The [local] context defines the four local extensions (in other words, 3000, 3500, 4000, and 4500). Each line is a script for connecting a call to the designated extension. For each extension script, one of the parameters to Asterisk's Dial() application stipulates that the Asterisk IP PBX is to use the SIP protocol to dial those extensions. In Asterisk terminology, communicating with another network element using a given protocol means that the IP PBX has logically established a discrete "channel" of that protocol type. Therefore, the IP PBX communicates to each endpoint running a SIP load via a discrete SIP channel. You'll see in a moment that each extension has its own context defined in the sip.conf file.

Finally, there is the [from-10.1.101.1] context. This context is accessed by the IP PBX when a call arrives from the 10.1.101.1 domain over the IAX channel. In a moment, you'll see that the iax.conf file refers to this context.

Why the need for the separate [local] context? Why not simply move the local exten lines to the [internal] context and dispense with the [local] context entirely? Calls inbound from the 10.1.101.1 domain over the IAX channel could then simply refer to the [internal] context to be connected to local extensions. The reason to discourage such a configuration is that the [internal] context is also provided outbound calling privileges. In our case, outbound calling is simply back to the 10.1.101.1 domain; however, a typical enterprise would have PSTN connectivity of some sort and the dialplan would permit a subset of local extensions to place operator and information calls, local area non-toll calls, regional toll calls, national toll calls, and perhaps international toll calls. A common approach to perpetrate toll fraud through the PBX of an enterprise is for a phreaker to place calls to the enterprise and experiment with ways in which he might gain access to an outbound "line." Segregating the local extension scripts in a context that doesn't include outbound dialing prevents inbound callers from automatically being granted outbound access.

The properties for a given SIP channel are defined in a context within the sip.conf file. Refer to the following sip.conf file fragment:

There are certain scenarios that override the setting of the canreinvite=yes specification. One of those is where the call is connected to another PBX over an IAX channel. There are also NAT considerations and situations where an Asterisk IP PBX needs to remain in the audio path to detect DTMF digits.

Let's look at an iax.conf file fragment to tie the remainder of the dialplan together:

The first context is [10.1.101.1] . Asterisk consults this context when it receives a message on its IAX port (port 4569 by default) with a source IP address of 10.1.101.1. The type=user statement means this is the IAX channel context over which calls arrive from 10.1.101.1. The remote IP PBX is cast in the role of a user making a call to Domain 2's IP PBX. The context statement informs Asterisk of the context in the dialplan (the extensions.conf file) it should consult when a call arrives from 10.1.101.1 over an IAX channel. In this case, the context is equal to the [from-10.1.101.1] context you saw earlier. The host statement, again, is the source IP address of the remote "user." The qualify=yes statement requires the IP PBX to assure the remote "user" is " reachable ." Reachability is defined as a maximum round-trip communication latency, which is defined by a configuration parameter found elsewhere. The default maximum latency is two seconds. The timezone statement is a reference that permits the Asterisk IP PBX to perform timezone conversions as needed to interact with this remote "user." In this case, the IAX "user" is in the America/Chicago (in other words, central USA) time zone.

The second context is [to-10.1.101.1] . You'll recall this is the context specified as the second parameter of the Dial() application invoked in the dialplan for the [outbound] context in extensions.conf . A type=peer means this is a context for outgoing calls. The host statement sets the destination IP address of the peer. The qualify and timezone statements serve the same purpose as in the [10.1.101.1] context.

A first step in exploiting a VoIP system is to determine which IP addresses and ports are open to support basic voice services and applications. TCP and UDP port scans were performed using Nmap 4.01 running on a host connected to the same Baystack 250 T-HD 10/100 Ethernet switch to which the Asterisk IP PBX was connected.

Following are some comments on the open ports:

Following are some comments on the open ports:

The definitions of the reported port states is documented in Chapter 2.

In this section, we also tested the underlying platforms for each of our SIP phones, which seemed to be the logical place for these tests, since SIP is generally the protocol used with Asterisk (and because Asterisk does not ship its own IP phones).

The phone was loaded using the firmware file, snom190-3.60x-SIP-j.bin . The firmware version from the phone's Firmware submenu read:

The phone was upgraded using archive 46xxSIP_111405.zip to SIP version 1.1. The following information was presented upon pressing the Mute button followed by INFO # (or <MUTE> 4636#):

Companion Web Site   Dustin Trammell from TippingPoint developed an IAX enumerator called enumIAX that enumerates IAX users. We did not have an opportunity to test this tool for the book, but have posted it on our companion website, www.hackingvoip.com.

There are several countermeasures you can employ to control and/or protect the open ports on an Asterisk system. These are covered in the following sections.

Asterisk opens very few ports, so there aren't many to disable. You have limited ability to disable ports on the SIP phones, but in some cases you can disable services such as telnet. You should definitely take steps to make sure there are no unnecessary services running on the SIP phones.

Use a Firewall to Protect the IP PBX

You can program a firewall to protect access to the Asterisk IP PBX. This will help prevent attackers from accessing or attacking open ports.

In addition to a traditional firewall, you can deploy application-layer or VoIP firewalls. VoIP firewalls are available from several vendors, including SecureLogix (http://www.securelogix.com), Sipera (http://www.sipera.com), Borderware (http://www.borderware.com), and Ingate (http://www.ingate.com). Some traditional firewalls, Intrusion Detection Systems (IDS), and Intrusion Prevention Systems (IPS) also provide support for VoIP. Note, however, that at this time, none of these products provides in-depth analysis of IAX signaling to detect attacks.

Asterisk does not provide a TFTP server. You can use TFTP to load configuration files and software on the SIP phones. As we demonstrated in Chapter 3, the TFTP server used to provision IP phones can often contain sensitive configuration information sitting out in cleartext. You can easily enumerate these files with the TFTPbrute.pl exploit demonstrated in Chapter 3 or even with the latest version of Nessus (http://www.nessus.org). See Chapter 3 for more information, along with countermeasures for this attack.

As you saw in Chapter 3, most networked devices support SNMP as a management function. An attacker can easily sweep for active SNMP ports on a device, and then query with specific vendor OIDs. The Avaya IP phones support SNMP (we "walked" their IP phones in Chapter 8).

Although a search of several sources and www.digium.com yielded no result for SNMP, a search of the Web indicates that an ability to monitor Asterisk through SNMP will soon be released.