Forms provide a way to allow the user to quickly and easily enter or edit many items of data in one process. Forms can have a number of fields, displayed in a similar way to a list, which the user can scroll up and down. Unlike list items, form lines are editable when they are in focus.

If a form has a view mode, then that will be its default mode. In view mode, the focus appears as a solid block, as shown in Figure 6-6. Switching to the edit mode is achieved by selection of Edit from the Options menu. 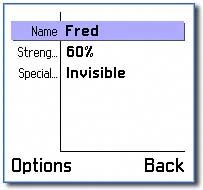 Generally, a form will be used with just an edit mode to create a new piece of information ”for example, to create new details for an opponent in a game. As there are no previous details for the opponent, there would be little point in having a view mode. In edit mode, the highlight appears as an outline to the field, with a flashing cursor for text editors, as shown in Figure 6-7. 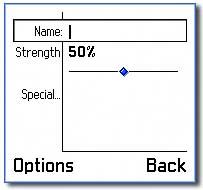 Each line in a form dialog must have a label and a control for editing the value of the item. The label can contain text, an icon, or both. The most common controls used are sliders, editors and pop-up fields, as shown in Figure 6-8, Figure 6-9, and Figure 6-10. As with other dialogs, custom controls can be used in forms.

If one or more line values have changed, the Back key displays a query asking the user if they wish to save their changes, as shown in Figure 6-12. Selecting Yes saves the form data, selecting No discards it. The form then returns to the view mode, if there is one, or to the previous screen if not.

In edit mode, the Options menu contains a number of items by default, as shown in Figure 6-13.

Figure 6-13. Options menu for a form in edit mode.

The basic meaning of all these items is self-explanatory, but for clarity a more detailed description is given here:

The example application OpponentForm has a form that allows the user to enter and edit details for opponents in a multiplayer game. It displays brief details of the opponents in a list, as shown in Figure 6-16. 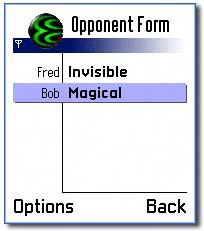 Selecting New from the Options menu allows the user to add a new opponent, by filling in a form. Selecting Open allows editing of an existing opponent's details, as shown in Figure 6-17. 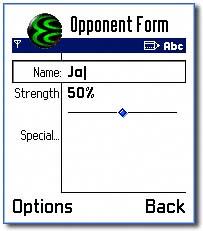 With the exception of Save , all the default items have been removed from the Options menu. Table 6-1 details the methods that are called when invoking the other default commands. These methods can be overridden in your code if required.


Creating a Form in an Application

The OpponentForm example demonstrates how to add a form to an application. This subsection discusses that application and shows how to define a form in resource, create a derived form class, and initialize form values. Additionally, it demonstrates how to save changes to a form, cancel changes, and finally execute a form.

Since forms are a specific type of dialog, the general process for creating them should be familiar. First, the layout of the form is specified in a resource file, and then a class derived from CAknForm should be created to initialize it and handle the form's data. The form is then executed using CAknDialog::ExecuteLD() .

In the OpponentForm example, the form uses a slider to set the strength of an oppponent, an editor to set the name , and a pop-up field to select a special power. The form data is validated on saving to ensure that both a user name and power have been set for the player.

Defining a Form in a Resource

Forms are contained within a DIALOG resource, specifying the form components .

Set the flags to indicate the following about the dialog:

As usual, the buttons field determines the soft keys ”in this case Options and Back . The form field refers to a FORM resource.


As a minimum, the FORM resource should define the flags and items components. In the OpponentForm example, the flags used are:

The items field refers to an array of dialog lines ( DLG_LINE ), which are the fields in the form. Each dialog line should contain a minimum of type , prompt , id and control . In the OpponentForm example, the third dialog line contains a pop-up field text control ”this has the optional itemflags indicating that it should open the pop-up window when the Selection key is pressed, as shown in Figure 6-18. 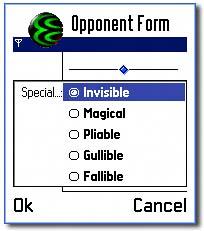 In order to use the form dialog defined in the resource file, it is necessary to derive from CAknForm and override some of its methods. In OpponentForm , the class COpponentFormForm illustrates this process.


On construction, it is usual to provide a reference to the data the form is to modify. In the OpponentForm example, a reference to a T -class, TOpponentFormOpponent , is passed through. This class has member data for the name, strength (defaulting to 50 ), and power of an opponent. A public method, IsValid() , determines whether the object contains valid data.

As with all dialogs, the form values can be initialized in PreLayoutDynInitL() , using ControlOrNull() to obtain a handle on each control as required. In COpponentFormForm , PreLayoutDynInitL() calls a private convenience method, LoadFormValuesFromDataL() , to perform the initialization. This is convenient , as it means LoadFormValuesFromDataL() can also be used to discard any changes if the user cancels a save.

When changes to the form data are to be saved ”for example, if Save has been selected from the Options menu ”the framework calls SaveFormDataL() . Therefore, this function must be overridden in the derived form class to ensure that the values in the controls are saved back into the form's member data.


As usual, the ControlOrNull() method provides access to the form's controls. The data in each control can then be obtained. If all saves have been successful ”for example, if valid values have been entered ”then SaveFormDataL() should return ETRue , otherwise it should return EFalse .

If the user chooses to cancel the changes made to the form ”for example, when selecting No in the save query ”the framework calls DoNotSaveFormDataL() to discard any changes. Override this function in the derived form class to ensure that the values of the form's controls revert to those in the form data. This is done in the same way as when initializing the form values. In COpponentFormForm it is achieved by simply calling the private convenience method, LoadFormValuesFromDataL() , which resets the values.