It’s probably easiest to understand switch statements when you see them in action, so let’s start with a simple switch statement and then follow it up by rewriting part of the Rock, Scissors, and Paper game using switch rather than if statements—because the game is so much fun!

Listing 3-9 shows an example of a simple switch statement that branches depending upon the value of the variable n. Figure 3-10 shows the results of the program. 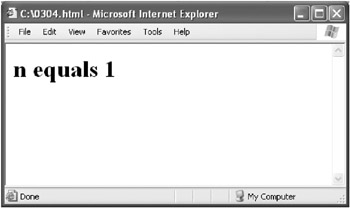 Listing 3-7 shows the original whoWon function in the Rock, Scissors, and Paper program. If you look at the code, you can see that it’s organized around four top-level if statements that test for the value of the variable iplay —the play randomly selected by and for the computer. These if statements, in the order shown, use conditionals to check for the following values of iplay (see Table 3-2).

The top-level conditional expressions shown in Table 3-2 create the structure of the whoWon function. If control passes via any but the first conditional, other if statements are still required to determine the winner.

In fact, the whoWon function could be diagrammed as shown in Figure 3-11. 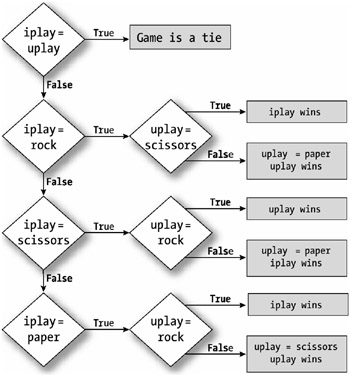 So this is pretty neat, and it makes for much more readable code, always a good thing. Because it’s a good idea to try new code after you’ve written it and because Rock, Scissors, and Paper is so much fun, let’s play a round! Naturally, the computer wins (see Figure 3-12). I think maybe it’s cheating with that random number generator….

The answer is that each of the cases within the statement ends with a return statement. When JavaScript hits a return statement within a function, processing returns to the place that called the function originally. So, these return statements serve the same purpose as a break statement (while also returning a value, namely the string to be displayed).

You’ll learn much more about functions in Chapter 5, “ Understanding Functions.”